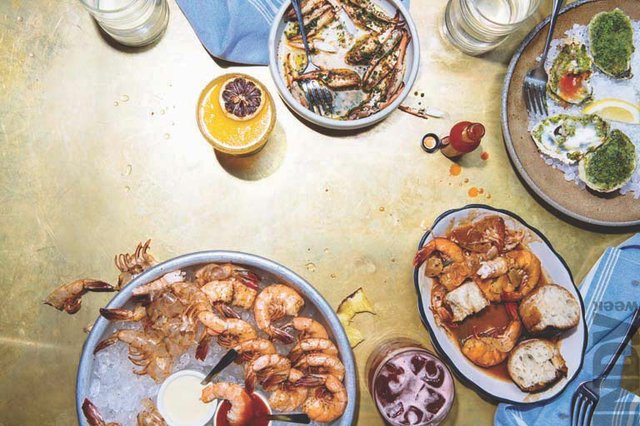 The world feels so precarious some days: Donald Trump, climate change, white nationalism, political instability, war, mass shootings, refugee crises, gaping inequality, you name it. It’s everywhere, every time we turn on the news or log into Facebook, this pervasive sense that our species is dangling its toes over a cliff as we stare out into the abyss.

That’s a hell of a way to kick off a food magazine, isn’t it?

Fear not. We’re not here to bum you out. Rather, The INDY’s 2019 Food & Drink Almanac is meant to offer a break from the chaos. More than that, it’s meant to be a celebration of a shared thread of humanity that stretches back eons, one that’s shaped the course of our existence and evolution.

Most of human prehistory was defined by the search for calories, through hunting or foraging, until we figured out, about ten thousand years ago, that if we domesticated our animals and crops, we’d have more sustainable supplies.  From this came civilization. Millions of years before that, pre-human primates developed a taste for fermenting wild fruit—i.e., alcohol—that’s still hardwired into our DNA. There’s even a theory that it was the desire to make beer, not bread, that led our ancestors to domesticate grains.

To be human is to eat and drink. The act itself is quotidian and necessary. It quells hunger pangs and releases endorphins.

But for most of us, meals are about more than survival. They’re sensual. They’re communal and experiential. They’re about the people we’re with and the laughs we share and the ambiance of the room. They’re about the subtle notes of oak in the wine and the way the filet melts on your tongue and the coffee’s deep chocolate aroma. They’re about the saltiness of the oyster and the boozy heat of the cocktail and that sauce that … well, you can’t put your finger on the flavor, but damned if it isn’t delicious.

They’re about the memories we make, whether we’re dropping a paycheck on an anniversary dinner or a few bucks on lunch tacos, whether we’re having a beer with old friends or a Bordeaux with a new flame.

That’s what we want to celebrate here: community, memories, experiences. And that’s why we created this inaugural Almanac—to help you navigate the Triangle’s diverse, bountiful food and drink landscape and make the most of your culinary adventures, so you can live deep and suck out all the marrow of life, as Thoreau put it (in a wildly different context).

Our goal was to direct you to the best of everything: world-renowned restaurants and holes-in-the-wall, elegant speakeasies and overlooked dives, burger joints and food trucks.

Some places will be familiar. Others won’t. That’s great. Go try something new. We think every restaurant and bar and brewery and retailer in here deserves your time and your business.

Life is short. Indulge your gluttonous instincts (and blame your primate ancestors).

Besides, if the world’s going to burn, I’d rather watch it happen with a full belly and a drink in my hand. Eat, drink, and be merry, y’all. Donald Trump has the nuclear codes.

The INDY’s 2019 Food & Drink Almanac is your comprehensive guide to the very best of the Triangle’s thriving culinary and beverage scenes. From restaurants to breweries, steakhouses to farmers markets, splurges to cheap eats, breakfast to late-night bites, cocktail bars to coffee shops, wine shops to dives—whatever you’re looking to eat or drink, you’ll find the crème de la crème in the pages that follow.

How to Use This Magazine

The Almanac is divided into three sections.

In the first, you’ll find an essay by Kelly Alexander—a former editor at Saveur and Food & Winemagazines who now lectures at Duke University—on the evolution of Southern cuisine. Then, Almanacproject manager Layla Khoury-Hanold highlights the ten hottest chefs in the Triangle, as well as five up-and-comers you should be watching.

Skipping ahead to the third section, we’ll present the INDY’s Food Triangles, the annual honors we bestow on those in the food and drink industry making their community a better place. This year’s recipients: local legend and retiring Crook’s Corner chef Bill Smith; Tina Prevatte Levy and Jennifer Curtis of Firsthand Foods; and the nonprofit Raleigh cafe Carroll’s Kitchen.

The second section, The Bests, comprises the bulk of The Almanac. It’s an exhaustive compilation of lists, subdivided into two parts: The Best of Local Food, and The Best of Local Drink. Here we’ll tell you where to get the best of pretty much everything edible: booze, beer, brunch, biscuits, bars, burgers, breakfast, as well as things that don’t begin with the letter b.

How We Did It

These recommendations don’t have bylines. They’re the product of collective wisdom, both from the contributors included on the masthead and countless others who offered their advice, suggestions, and expertise. (For categories in which there was an analogue, we also included readers’ choices from the INDY’s 2018 Best of the Triangle poll.) Final decisions lay with editor Jeffrey C. Billman, project manager Layla Khoury-Hanold, and INDY arts and culture editor Brian Howe. Tweet us @indyweek or email us at [email protected] to tell us what you think we missed. —Jeffrey C. Billman