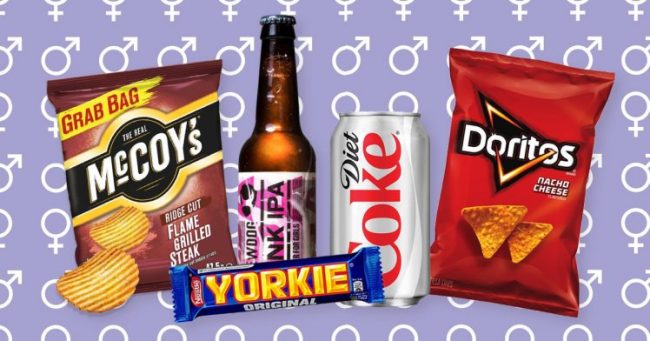 Do these really need to be advertised to a particular gender? (Picture: Getty)

Yet again, a company has run into trouble by attempting to create a product specifically for women.

Hot on the heels of Doritos’ quickly canned ‘lady crisps’ idea, Brewdog are now doing a Pink IPA for women.

They maintain that their beer stunt wasn’t in earnest, and that they were actually sending up the trend of marketing products to women.

In response to the backlash, they issued a statement saying that ‘the love of beer is not gendered’.

They’re right. Anyone can love beer.

So why did they write ‘beer for girls’ on the Pink IPA bottles?

There’s a lot in our world that is marketed in a gendered way, from the unnecessary (razors, shampoo) to the slightly more sensible (clothes and so on).

But food is fully, 100% not gendered. Men and women both eat. They are both physically capable of eating the EXACT SAME food.

It’s not like women have four stomachs that allow them to digest grass while men don’t – our digestive systems are the same.

Sure, men typically need to eat more food than women, as they require more calories to fuel their usually larger bodies.

But that’s the only difference.

All the other differences are down to personal taste – and ridiculous gendered marketing.

It goes both ways – Diet Coke was firmly marketed towards women, so Coca Cola produced the more ‘manly’ Coke Zero Sugar, both of which have no calories and no sugar.

The conclusion, therefore, is that the marketing was what stopped men from drinking Diet Coke, not the fact that it was sugar-free.

Other products over the years have marketed themselves as explicitly for men.

McCoys crisps ran the tagline ‘Man Crisps’, while Yorkie Bars went with ‘it’s not for girls’ – although both have since changed their taglines.

Women eat crisps and chocolate bars. We quite like them.

Why any company would want to alienate half its potential consumers by marketing exclusively – and explicitly – to men is just baffling. It makes no business sense.

Other brands go for a more subtle form of gendered marketing.

Let’s stick with chocolate bars and look at Mars. Their ‘you’re not you when you’re hungry’ ad campaign for Snickers was heavily aimed at men, even depicting a man becoming a diva-ish Joan Collins due to his lack of Snickers.

Meanwhile, Galaxy – also made by Mars – is firmly aimed at women, with its ads showing women curled up alone in a beautiful house and a chunky-knit jumper, getting all orgasmic over Galaxy chocolate.

It certainly has nothing to do with taste – I like Snickers and Galaxy equally. They’re both pretty great chocolate bars.

It is possible to market something in a gender neutral but totally effective way – Cadbury have nailed it, with their drumming gorilla and acrobatic eyebrows.

It’s very easy to fall into the boring habit of showing women luxuriating over a pot of yoghurt while men skateboard around with a Pepsi Max.

Maybe the stats show that more women eat yoghurt and more men drink Pepsi Max, but it’s a chicken-and-egg situation – is yoghurt not advertised to men because they don’t buy it, or do they not buy it because advertising has told them it’s not for them?

It’s time we started seeing food and drink for what it is – a tasty, non-gendered fuel (or treat).