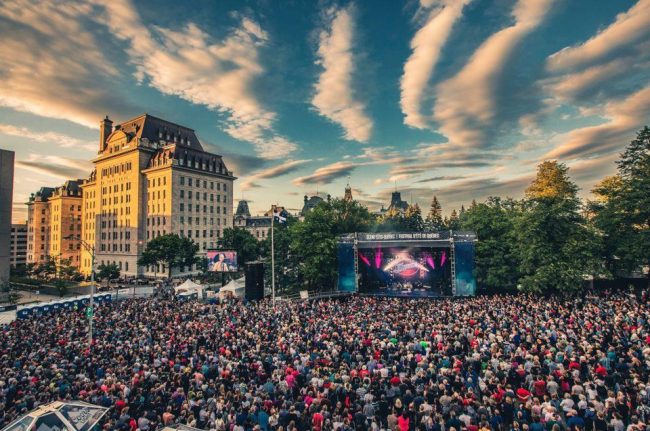 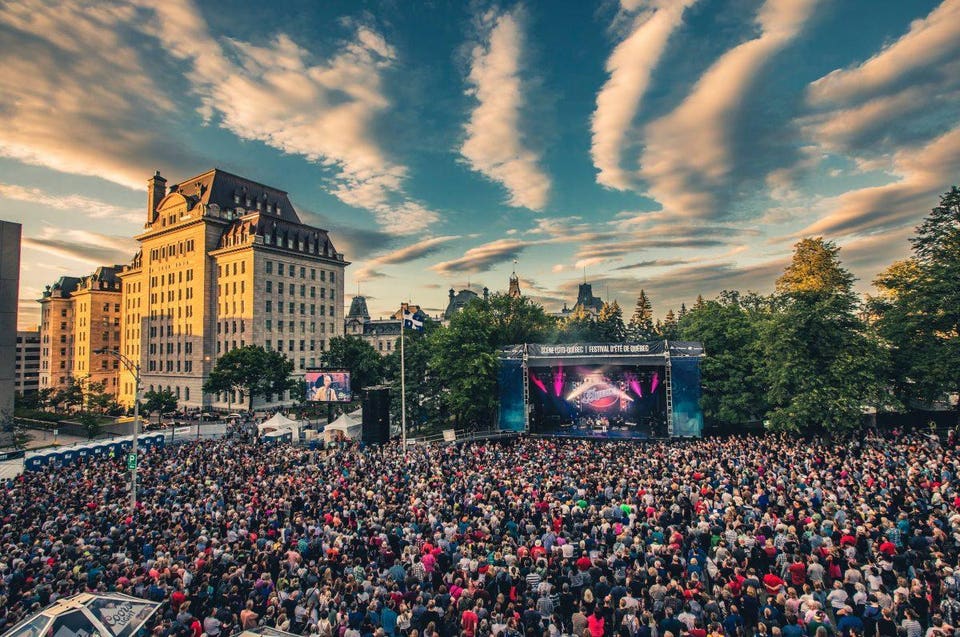 With over 325,00 attendees, it’s one of the biggest music festivals in North America and yet the Festival d’ete de Québec still flies under the radar for most Americans. In fact, only 10% of festival attendees are from the US. Here are a few reasons why that’s crazy. For starters, FEQ is older than Woodstock. It all began in 1968 by a pharmacist who pulled together a few businessmen and artists with the intent to highlight local artists.

And unlike the majority of major concerts in the U.S., FEQ isn’t exorbitantly priced. The cost of the entire 11 day festival is about $80 USD. Did I mention the pass is transferable?

In the past, FEQ has featured artists including The Rolling Stones, Lady Gaga, Bon Jovi, Sheryl Crow, Red Hot Chili Peppers, Foo Fighters, The Killers, Metallica The Who, KISS, among others.

This year’s headliners? Mariah Carey, Chvrches, alt-J, Twenty One Pilots, Imagine Dragons, Lynyrd Skynyrd, Blink-182 and more. Over 250 performances take place in ten venues, including the Bell Stage on the Plains of Abraham. This is the biggest outdoor stage in North America, holding up to 80,000 spectators. Moreover, it’s casually located on a historic battlefield, the site of a 1759 battle. NBD.

Obviously, the main draw of the festival is the music. That said the festival is one you don’t want to miss for plenty of reasons. It’s situated in a special area of the city where historic Québec meets urban, modernized Québec. Meaning, it’s a super safe, charming and walkable area of the city where you can explore attractions and historical sites within the walled city of Old Quebec, a UNESCO World Heritage site, in between rocking out at the stages. 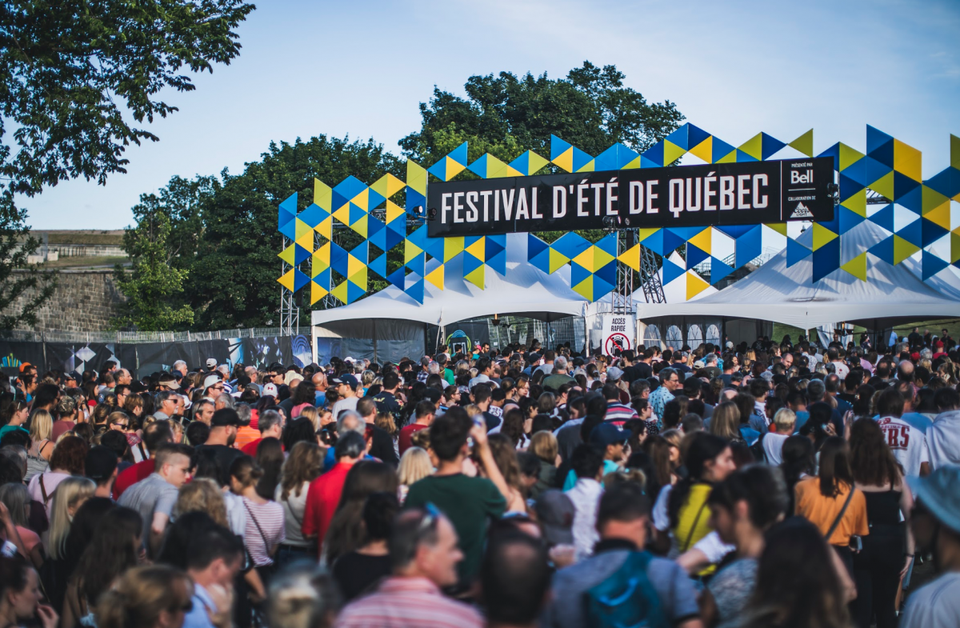 And kicker? The food.

Forbes chatted with Frédéric Cyr, Culinary Director, Fairmont Le Chateau Frontenac, the chef in charge of catering for FEQ on menu inspiration, must-eat items and things you shouldn’t miss in the city!

What is the inspiration for the menus that will be created?

First, I must say that it’s an honor to be taking part in the Festival d’ete de Québec, and to welcome people from all over the world. It’s such a unique opportunity to showcase our food and culture here in Quebec City as part of this iconic event.

As for the food, we’re going to be feeding many performers over the course of 11 days, so FEQ becomes the “land of special requests.” We need to have every option such as  vegan, gluten free, keto… and any other food trend that’s currently in fashion. At the same time, we find that there’s a desire for comfort food. Many of these artists are traveling far from home, often for extended trips, and so we try to give them food that’s familiar and makes them feel good. We’ll have barbecue, grilled meats and fish, Asian dishes, sushi and more.

What are some of the foods that guests should try while at the festival?

There’s so much great food everywhere, but if you want some of Québec favorites, I’d say poutine, pouding chomeur which is a moist vanilla cake cooked in maple sauce, duck confit and French tartare. 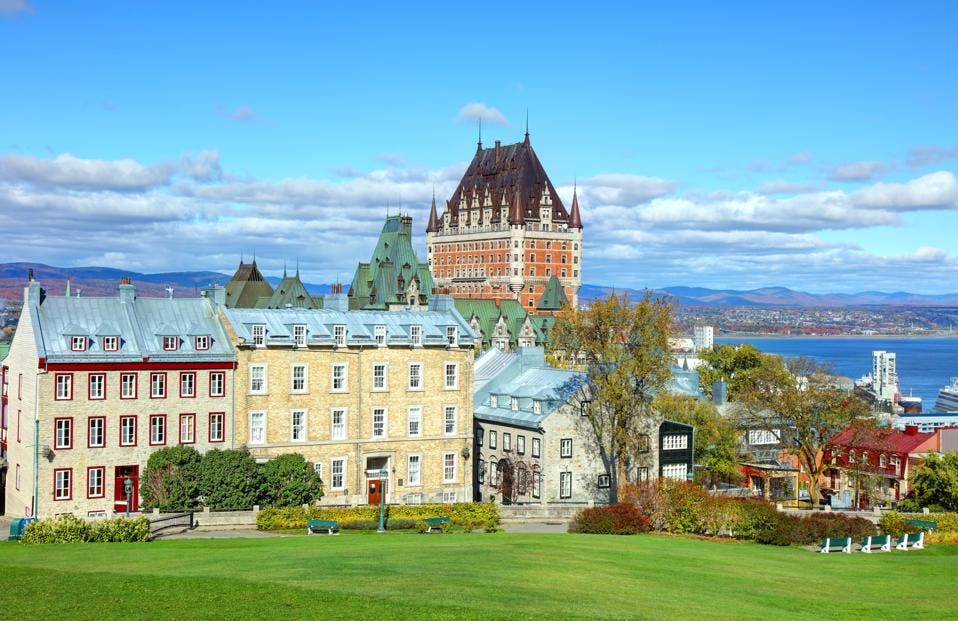 What are some of the things to enjoy in Québec City any time of year?

Québec City is a great year round destination. For music lovers, the Imperial Bell, one of the venues at the Festival d’été de Québec, puts on shows throughout the year and often showcases artists who performed at the FEQ, or will be part of next year’s lineup.

There’s an amazing restaurant scene. Sip an artisan craft beer, check out some of the great mixologists and cocktails, enjoy music in the park, stroll through the Old City, take a walk along the promenade Champlain, and check out the new Pavillon Lassonde at the Musee National des Beaux-Arts.

Now that you know what you’re getting yourself in to, below is the ultimate rundown of what you need to be eating while at FEQ!

At FEQ there will be a huge selection of cuisine to choose from ranging classic poutine to American style burgers to poke bowls.

Check out the below for what food trucks are where and what they will be serving!

Bistro SAQ – on plains of Abraham

For those who want more of a sit-down dining experience, the below restaurants are recommended.

Must-try restaurants in this area include Atelier and Ophelia, two trendy spots with great cocktails and upscale fare; Château Frontenac’s restaurants 1608 and Bistro le SAM, which have a cheese cellar; and Le Ciel, a revolving restaurant with an amazing view of Québec on top of Le Concorde hotel.

If you’re in this area, Albacore is known for their cheese and seafood; Batinse is a cute spot featuring local cuisine with a twist; Bello is popular for Italian; La Bûche offers funky Quebec cuisine and a real stereotypical Quebec experience; and Tournebroche is known for its sustainable upscale fare. This last spot is the only restaurant in Canada to use 100% renewable green natural gas. They also transform all of their vegetable waste into compost to nourish their rooftop gardens.

If you find yourself downtown, check out Battuto a famous Italian restaurant that requires reservations or Kranken Cru a trendy oyster and seafood bar, serving fresh local products.