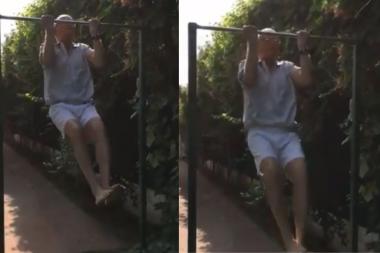 Age is indeed just a number. A 90-year-old Indian Air Force veteran is giving netizens some major fitness goals after a video of his effortless workout was shared online by his son.

As International Yoga Day was celebrated across India and several other countries on June 21, Secretary Ministry of Drinking Water and Sanitation, took to Twitter to share a video of his father, Air Marshal PV Iyer (retd) doing bar pull-ups.

“Useful to do pull-ups at the age of 90! My dad, Air Marshal PV Iyer (retd), ahead of the curve and all of us, as usual,” Param Iyer captioned the 10-second long video.

The clip has been viewed nearly 2.5 lakh times on Twitter besides being shared and liked by thousands of people.

Many expressed their admiration for the nonagenarian’s fitness.

“As a young sports correspondent in Indian Express, I wrote on Air Marshal when he ran in Rath Marathon in Delhi in 1982! Good going Sir!” wrote Norris Pritam.