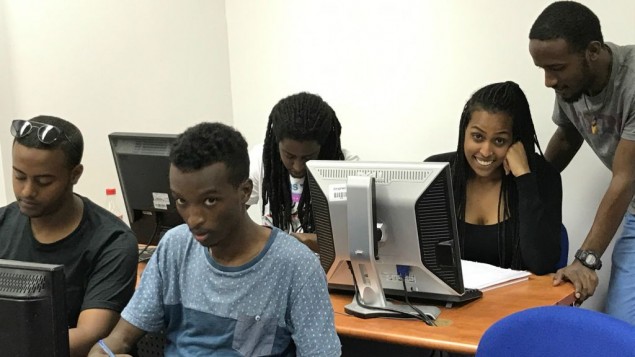 Twenty-five-year-old David sits quietly at the table, waiting for his turn to speak. When he does so, it’s with conviction, though his voice is soft and betrays a measure of shyness unusual for young Israeli men.

Get the Start-Up Israel’s daily newsletter
and never miss our top stories   FREE SIGN UP!

David, not his real name, came out of his classes in computer programming to speak about the course he is taking. As soon as he is done, he is scheduled to rejoin his class of men and women aged 21 to 30, who are studying network management, software development, quality assurance and data security.

They come from all over the country to immerse themselves in their studies so that they too can be part of the startup nation’s booming tech scene. And they all have certain things in common: high school degrees, army service or alternative national service, and Ethiopian descent.

Now, they are learning about technology at Tech-Career, a nonprofit organization set up by and for Ethiopian Israelis to give them the skills they need to play a part on the nation’s tech scene.

David is one of six children, and the first in his family to be born in Israel. His parents immigrated to Israel in 1991 as part of Operation Solomon, the second of the two waves of mass immigration in which Ethiopians undertook a perilous journey, many on foot via Sudan, to reach the promised land.

“I did my army service without really knowing anything about computers,” said David. “Only before my release did I realize there was something called computer sciences. I am here because I have an aim. There are not many people from the Ethiopian community in high-tech, but I see that graduates from the course manage to get jobs in the sector. And that is what I want too.”

Opening doors to the tech industry

Tech-Career was set up in 2002 by Asher Elias, an Ethiopian social and high-tech entrepreneur who aims to help young Ethiopians fully integrate into Israeli society by arming them with professional skills to qualify for well-paying jobs in the high-tech industries. When he founded his NGO, only four Ethiopian-Israelis were employed in the high-tech industry, and all of them had been trained in Ethiopia.

A study released in 2015 by the Taub Center for Social Policy Studies in Israel — based on numbers supplied by the Central Bureau of Statistics — showed that in both employment and education, Israelis of Ethiopian descent have made great progress over the past two decades. By 2011, 72 percent of Ethiopian Israelis at prime working ages (25-54) were employed, slightly lower than the 79% employment rate of the non-Ethiopian Jewish population, and more of them were working full-time.

Nevertheless, there were still significant gaps between Israelis of Ethiopian background and others. About 21% of Ethiopian Israelis educated in Israel are in the top levels of the labor market, as compared to about 40% among the rest of the Jewish population, and about 60% are employed in occupations for low-skilled or unskilled workers, compared to 41% among the rest of the Jewish population (among first-generation immigrants, both those metrics were far lower). Ethiopian-Israelis make up some 145,000 people, or 2% of the total population.

At school, Ethiopians often don’t get the tutoring and encouragement they need to access higher levels of math and science studies, and a “cultural bias” in the pre-army recruitment tests — which are geared toward the wider population and not necessarily to the Ethiopian culture — pushes them to enroll in combat units and not in elite intelligence units, from which many of Israel’s tech entrepreneurs originate.

Tech-Career runs five professional courses each year, each six to eight months long. The students are required to live in dormitories, disconnecting from their daily occupations, families and financial worries; they get a stipend from the National Insurance and Tech-Career helps students who need added financing. They immerse themselves in their studies and have access to computer laboratories around the clock. They receive individualized guidance and tutoring, and take international certification tests in programming — like the Cisco Certified Network Professional certification — at the conclusion of the program.

In addition to their technological studies, participants invest some 200 hours in mastering soft business skills as well, like how to write a CV, how to prepare for a job interview, how to manage time and how to work in a team.

“I am now at the stage of preparing for my interviews,” David said. “I am learning to present myself in the best possible way.”

In the classes the students, men and women, laugh and tease each other — they are back at school, but with a clear mission in mind: to succeed.

“We are very strict with our students,” said Doron Toren Shamia, who’s in charge of helping place the students at tech firms after they graduate. “Our aim is to give them professional certificates that will allow them to work in the hottest areas of technology.”

During the course, students also get one-on-one mentoring from volunteer high-tech executives and former graduates to familiarize them with the high-tech work culture, introduce them to their social network, prepare them for job interviews, and facilitate their integration into the high-tech workforce.

Toren Shamia has developed a network of companies and mentors she is in touch with, including cybersecurity firm Check Point Software Technologies Ltd., HP, Nice Systems, Wix.com and Raphael Advanced Defense Systems, to help them overcome the entry barrier to the exclusive army-buddy tech scene.

“We don’t want any special treatment,” she said. The mentors who work with Tech Career help students get the interview, but then the playing field is equal and if they get the job it is their own doing. “We don’t give them the fish, but we give them the fishing tools.”

When he is not studying, David volunteers in a school helping Ethiopian children with their homework, and he goes to an agricultural garden once a week, working with elderly Ethiopians who tend to spices and plants they used to grow in Ethiopia.

“Part of our program is to also make sure the students learn to give back to their community,” said 49-year old Naphtali Avraham, the CEO of Tech-Career, who has led the nonprofit for the past 2.5 years. At the age of 13 Avraham left his family and walked through Sudan to reach Israel with a group of nine children of similar ages.

“You cannot develop without being proud of your roots,” said Avraham, who was an officer in the Israeli Air Force for over 20 years. “You can only tap into your strength if you know your history and the efforts your parents made to come here and the difficulties they faced.”

Tech-Career helps its students realize they have the ability and talents to work in all fields, he said, “knowing they can overcome all barriers.”

Ninety percent of the certified graduates – or 132 out of the 147 graduates who participated in the nine technological courses from 2013-2016, are now working in their field of training. More than 20 Tech-Career graduates, for example, are employed at Bynet Data Communications Ltd. which has held Cisco Certified Network Professional courses with Tech-Career and the Economy Ministry.

“More and more students are joining our ranks,” said Avraham. “The flow shows that the dam has broken, and they see that it is possible to be part of this world. But still, there is so much more to do.”

There has been no “exit” — sale or initial public offering of shares — of a company of an Ethiopian entrepreneur in Israel yet, he said. “This we want to change,” he said. “To be an entrepreneur you need to have money, contacts and networks. You can’t be worried about your daily bread.”

In addition, companies should be encouraged to promote cultural diversity in their ranks, he said. “Promoting diversity is not only good for Ethiopian immigrants but for Israeli society as a whole.”