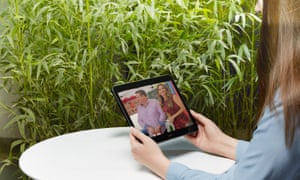 Since its first demonstration in the mid-1920s television has gone through five major shifts that affect the way viewers consume it. Now we’re on the verge of a sixth shift that will bring it kicking and screaming into a brave new world of TV everywhere.

The UK is the most advanced TV-watching country in the world, according to Ofcom, and has seen a record rise in the use of tablets for consuming media. The living room TV is no-longer the be-all and end-all of television consumption.

The change is being driven by the younger generations. Recent data from Childwise suggests children aged under five are watching more TV than ever at 2.6 hours a day, accessing on-demand content through tablets and other devices. Meanwhile, Childwise also found that, on average, five- to 15-year-olds are spending more time online than sat in front of the TV.

They are place-shifting their content, watching TV online through devices at a time that suits them. This year will see that behaviour cemented with the continued rise of on-demand and the launch of new services, such as Sky Q, which allow all television to be place-shifted – the sixth evolution of TV.

The first televisions were black and white. Pictures were initially grainy but steadily got better as the camera or scanning systems improved. Amplified mechanical televisions such as that invented and demonstrated by John Logie Baird in 1925 peaked at 240-lines in 1936. Each line scanned across the television to create an image.

Electric televisions, which are more akin to what is in use today, were first demonstrated to the public in 1932 by American inventor Philo Farnsworth. TheBBC broadcast the first regular “high-definition” television service from Alexandra Palace on 2 November 1936 with 405-lines of black and white pictures. By contrast most of today’s TVs have the equivalent of 1,080 lines.

Black and white television continued to improve, but it wasn’t until 1954 that the first colour broadcasts were introduced in the US. The system used a new National Television Systems Committee (NTSC) standard encoding brightness and colour separately so that black and white TVs could use the signal too.

A European colour standard wasn’t set until 1963 with Phase Alternating Line (PAL), which was technically superior and able to deal with weather better than NTSC. Colour broadcasts did not start in Europe until 1967 with BBC2 becoming the first channel in the UK to broadcast in colour, spearheaded by then-controller Sir David Attenborough.

The next big change in TV technology came in the form of time-shifting, although the word “time-shift” hadn’t been invented yet.

Video tape recorders were developed in the early 1950s using reel-to-reel magnetic tape and were employed by the television industry. An evolution of that technology made it into homes as the video cassette recorder in various formats by the 1970s, starting with the Philips Model 1500 in 1972.

It was the first time that users could record a programme and then play it back at a time convenient to them, the very basis of time-shifting, leading to one unsuccessful entrant even being called “the great time machine”.

VHS recorders won the battle for the time-shifting tape format, which were succeeded by DVD recorders and hard-drive based digital video recorders (DVR) starting in 1999. DVD recorders died out but DVRs continue to be popular, forming the basis of most time-shifting equipment and broadcast TV recorders that can “pause live TV”.

After the invention of time-shifting, digital television broadcasting was the biggest thing to happen to TV since colour – and, combined with DVRs, it paved the way for further evolution.

Digital television brought with it many advantages over analogue TV. The most obvious for the consumer was an increased picture quality and an expansion of the number of channels that could be broadcast at the same time over the same radio frequencies. Digital TV also enabled enhanced services, typically accessed through the “red button” and a replacement of the teletext services.

Several specifications battled it out for the digital TV crown in the 80s and 90s, with various countries and regions adopting different standards, but it wasn’t until 1998 that the first digital broadcast was made in the UK.

The digital switchover followed in most countries, where the analogue broadcasts were switched off leaving only the digital broadcasts, which paved the way for new 4G mobile data services in the UK by releasing the existing spectrum for new uses.

The airwaves that carried fuzzy analogue TV now carry your cat gifs, breaking news and place-shifted video, but more on that later.