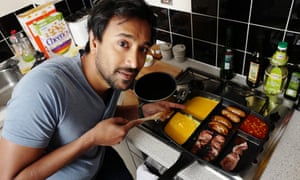 A breakfast fit for kings requires a pan fit for champions.

Give us this day our Daley bread, four sausages, bacon and eggs. Olympic diver Tom Daley made history this week by Instagramming a picture of himself cooking a full English breakfast in a single, compartmentalised pan. People went nuts. The picture of the buff baby-man pointing at bacon was liked more than 47,000 times. (Think about that. If the spirit of Gaia came to you in a dream and revealed how to reverse climate change, as well as seven amazing tips to get rid of belly fat, you would probably get less than 10 likes for it.) Personally, I’m not sure this maverick breakfast paddle is worth a hill o’ beans – so I am recreating the photographed breakfast to find out.

The Master Pan is certainly striking. Its grid looks like a food sudoku, which Daley has effed up by putting eggs in twice. And that’s not counting the ones in the pot. Scrambled and boiled eggs for breakfast? Way to make your arteries say “Oeuf!” (Is that gag borne out by dietary evidence? Omelette you decide!) Rather than straddling two hobs, the pan uses a central baseplate to conduct thermal energy. The griddle in the middle has the heat for the meat, while, er, the outside trays have less. Or none at all; debate raged online about the pan’s inefficiency.

The glory of Twitter is that if enough people grill a celebrity about cookware, eventually they have to respond. “It cooks everything at different heats, so it all finishes,” was Daley’s optimistic reply to the suggestion that cooking at different heats would give him a parasite infection. In my test, residual heat from cooking the sausages properly scrambled the eggs too quickly. Other problems included bean splash on my bacon. Frankly, the end product looks like a prison meal, waiting to be slid through a hatch. But damn it, I can’t look at Daley, his face like an angelic marmoset, and judge the pan poorly. Maybe the makers are relying on that? Perhaps this pic – as adorable as it is viral – is all part of their Master Plan?

A problem, shared with skinny jeans, is lack of space to stir my beans.

Cupboard. It may be a Daley treat but don’t go overboard. 2/5