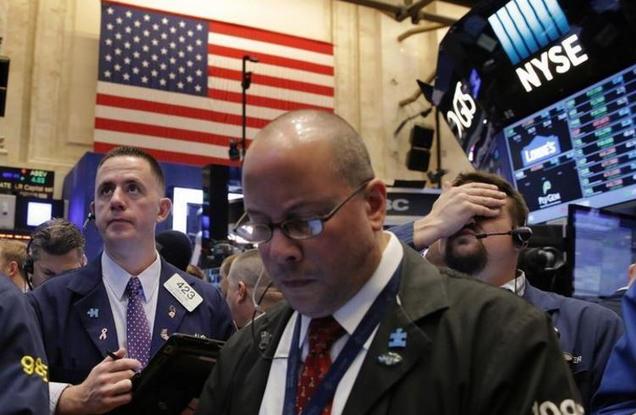 A swoon in technology and transportation shares led the S&P 500 slightly lower on Thursday on a day full of corporate earnings reports, but the Dow industrials set a record closing high, helped by a jump in Verizon.

The Dow Jones Transport Average, often looked at as a gauge of the economy’s health, closed down 3.1 per cent, dragged lower after a worrisome outlook from package delivery company United Parcel Service.

The S&P 500 technology sector was the worst performing major group, falling 0.8 per cent even as Facebook shares gained 2.9 per cent after the social media company’s results.

After the bell, Amazon.com shares fell 2.7 per cent after the e-commerce company’s results. Amazon is the last of the high-flying companies known as “FANG” stocks to report this quarter.

“The general sentiment of the market coming into the day was that transportation stocks are telling us something that we’re not paying attention to,” said Art Hogan, chief market strategist at Wunderlich Securities in New York.

“You’ve got a general feeling a lot of good news is priced in to this market,” Hogan said. “That holds with technology. The problem with momentum stocks, once they start heading in a direction they get there violently, and that’s what we’re seeing today.”

“The overall weakness in technology to me is a little bit of a surprise. We have seen some decent reports,” said Peter Jankovskis, co-chief investment officer at OakBrook Investments in Lisle, Illinois. “There could be just a little bit of profit-taking going on here as we move near the end of the month.”

The PowerShares QQQ Trust, an exchange-traded fund (ETF) tracking the Nasdaq 100, hit a record intraday high shortly after midday in New York but fell as much as 2.5 per cent from there with a spike in volume. As the market fell, Nasdaq 100 futures posted their busiest hour in terms of volume since at least mid March.

My guess is this is selling by a large ETF holder, likely in the QQQ, said Kim Forrest, senior equity research analyst at Fort Pitt Capital Group in Pittsburgh, referring to the market’s afternoon decline.

Healthcare, which has been the second-best performing group this year, fell 0.7 per cent.

With nearly half the S&P 500 having reported, second-quarter earnings are expected to have climbed 10.7 per cent, compared to an 8-percent rise expected at the start of the month, according to Thomson Reuters I/B/E/S.

Verizon shares surged 7.7 per cent. The No. 1 US wireless carrier’s quarterly revenue topped expectations. The stock was the biggest support for the S&P 500, followed by Facebook and telecom rival AT&T.

Declining issues outnumbered advancing ones on the NYSE by a 1.28-to-1 ratio; on Nasdaq, a 2.03-to-1 ratio favoured decliners. About 7.7 billion shares changed hands in US exchanges, well above the 6.1 billion daily average over the last 20 sessions.