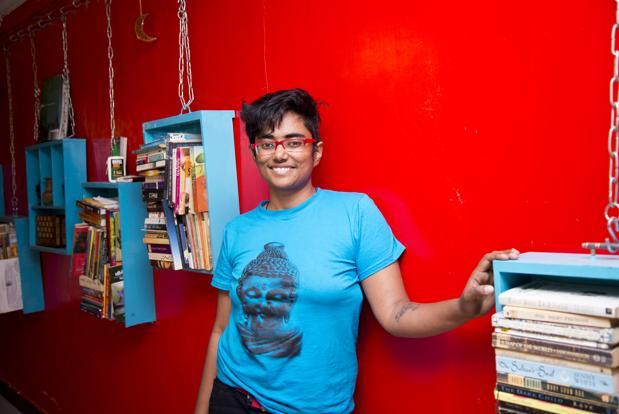 Robin Chaurasiya, one of the 10 finalists for the Global Teacher Prize 2016. Photo: Aniruddha Chowdhury/Mint

Mumbai: Robin Chaurasiya, one of the 10 finalists for the Global Teacher Prize 2016, knows what she is going to do with her million dollars if she wins—she will share it with the nine others.

“They all need the money as much as I do to support the work that they are doing,” says the 30-year-old former US Air Force lieutenant.

Chaurasiya is the co-founder of Kranti, an NGO that seeks to educate the girl children of sex workers in Mumbai’s Kamathipura.

She and the nine other finalists for one of education’s biggest prizes—it is considered among the top recognitions for teachers and was instituted by the UK-based Varkey Foundation—were chosen from a field of more than 8,000.

“The human mind is an incredible thing. For each mind to achieve its full potential needs a spark. The spark of enquiry, excitement and passion. Often the spark comes from a teacher,” said Stephen Hawking in London while announcing the names of the finalists. He acknowledged that he wasn’t the easiest person to teach, was slow to learn to read and had an untidy handwriting.

“My teacher, Dikran Tahta, showed me how,” he said.

Chaurasiya, who is teaching the girls to think and speak for themselves, competes with teac-hers from the UK, US, Palestine, Japan, Pakistan, Kenya, Australia and Finland for the cash prize.

For Chaurasiya, starting Kranti about five years ago was an outcome of a short stint of working with the Rescue Foundation, which was involved in rescuing, rehabilitating and reintegrating victims of human trafficking.

It was good work but she worried that the women weren’t being encouraged to aim higher. They were taught how to make pickles and papad, and some were married off.

“Nobody ever spoke or believed in these girls wanting to do anything else like being an astronaut, painter or journalist. There was no programme there to help them,” says Chaurasiya who, along with a colleague at the foundation, started Kranti.

“We felt that most NGOs didn’t really help the women to get ahead in life. I wanted to give these women a level playing field,” says Chaurasiya, who was born and raised in the US.

Kranti started out as an NGO, trying to help get the kids of sex workers into school. That proved to be a challenge as nobody wanted to take them. And even if they did get in, they were unable to integrate, says Chaurasiya, who then tried working with other NGOs to educate them.

That didn’t work as well. Most NGOs were just focused on getting the children through school and that kind of education isn’t “really useful”, says Chaurasiya.

She eventually decided to become their teacher.

Kranti hosts 18 kids (aged 12-21) from different backgrounds, along with two resident cats and another 11 cats from the neighbourhood that have made the shelter their home.

The school, which doubles up as a hostel, focuses on five Cs—communication skills, compassion, creative thinking, critical analysis and community organizing for teaching the students.

All these concepts are integrated into projects and the traditional style of teaching subjects like English, maths, history and science is given a miss.

For instance, a project on neighbourhood cleanliness saw the kids write letters to the local corporator for creating a park in the area, visit local residents and convince them about the merits of keeping the vicinity clean and understanding the need for public toilets in the area.

The project includes communication skills, creative thinking and critical analysis, says Chaurasiya, who also focuses on travel and exposure as a way of learning for the kids. “It’s always group learning here and every child is encouraged to share their perspective to the best of their ability,” says Chaurasiya, who believes that even conventional education is moving in the same direction now.

To keep it interesting for everyone, the school follows a schedule where the 5Cs are focused upon through different days like Music Mondays, TED-talk Tuesdays and thinking Thursdays. “When people leave here, they will take with them some of these concepts that they have learned, like listening to the TED-talks,” says Chaurasiya.

Chaurasiya also focuses on therapy and meditation to rehabilitate the kids. She has taken to meditation and Buddhism as a way of life and takes an annual two-week retreat in the mountains with the girls.

Some girls have been admitted to colleges in the US. However, it has not been easy; one of Chaurasiya’s first students who was admitted to New York’s BARD College came back and is now taking a gap year. “Kranti is so tailored to their needs that finding schools that meet their requirements is difficult,” says Chaurasiya, who is in talks with colleges that are more flexible.

For Chaurasiya, it has not been easy to keep the ship afloat. In the past three years, she has been asked thrice to vacate the 700 sq. ft house she occupies in Santacruz, a suburb in Mumbai because neighbours are unhappy about the girls wearing shorts and sometimes coming back late in the evenings from, say, a play at Prithvi theatre.

“My big dream is to have my own place where we have a shelter for the kids, a school and a community centre with a cafe and bookstore,” says Chaurasiya.

That will cost money, Chaurasiya knows, and the $1 million prize will help, but despite all that, she still wants to share.