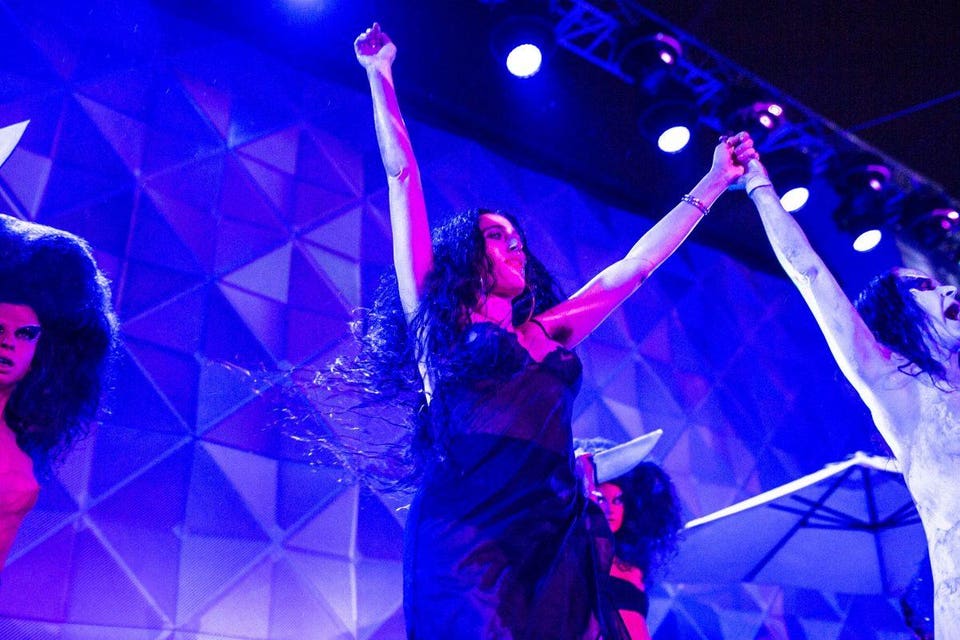 Coming back for its second annual edition during World Pride weekend in New York City, the nightlife entrepreneur, Ladyfag, is gearing up to celebrate with her queer music festival, LadyLand. As one of the premiere nightlife producers for over a decade, the impresario behind famed parties like Holy Mountain, Battle Hymn, and 11:11, to name a few, is also bringing together another incredible lineup of queer talent for the live spectacle coming to Brooklyn Mirage.

She’s been dubbed “nightlife sorceress”  by The New York Times for producing some of the most renowned parties in the world with leading talent in the realms of fashion and nightlife. After her inaugural festival brought the crowds out to Brooklyn for a series of musicians, drag performers, and incredible DJ’s in 2018, Ladyfag is back to celebrate the return of her music festival during a monumental time in queer history.

Coinciding with the first-ever World Pride celebration hosted in the United States as well as the 50th anniversary of the Stonewall Uprising, Ladyfag’ deft curation honors the occasions with the utmost care. Representing every letter of the LGBTQ+ acronym with a lineup of performers that run the cultural gamut, the festival will also witness the live reunion of Gossip, whose LadyLand performance kicks off their first tour in 7 years and marks a decade since the release of the trio’s iconic album Music for Men.

With headliners Gossip and Honey Dijon, LadyLand is rounding up the best and brightest in queer talent from household names to newer acts like Yves Tumor and Its Band as well as the newly added Poppy. 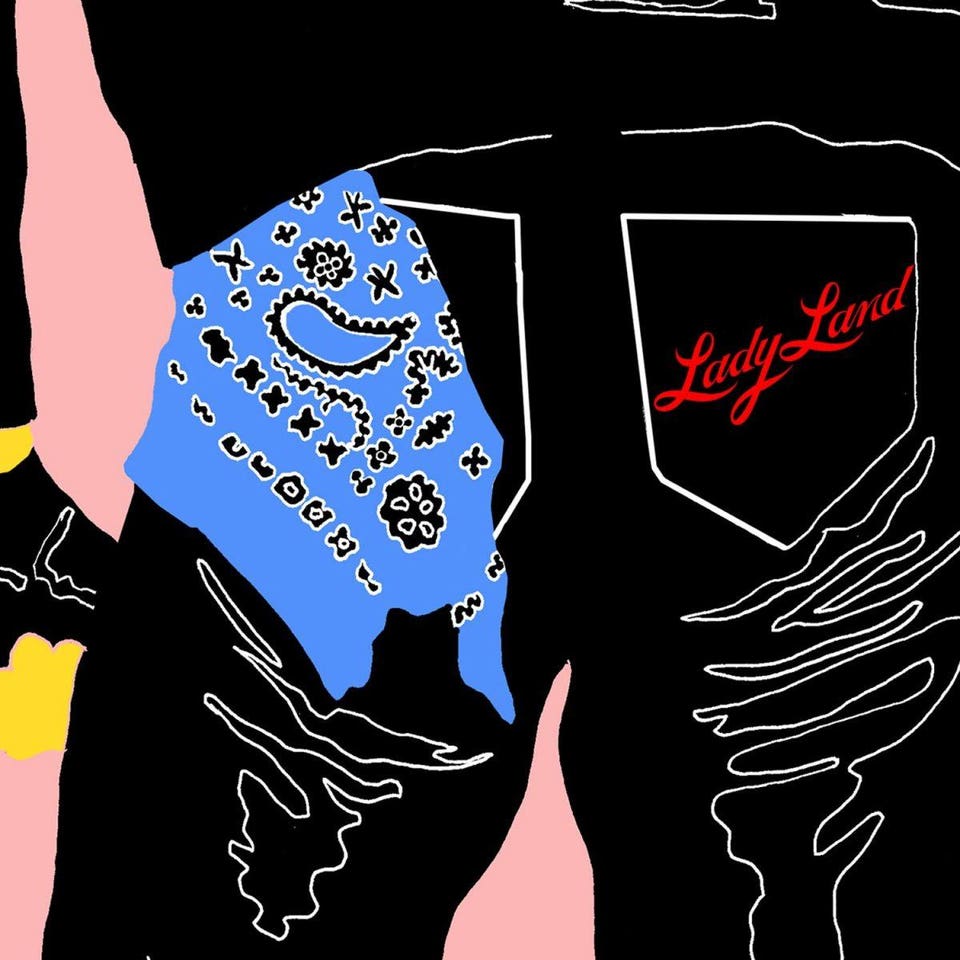 Just a little over a week before the festival, I caught up with the nightlife entrepreneur for more on the momentous occasion, powerful lineup and second year of the queer music festival dreams are made of:

Roytel Montero: What’s the process been like putting this year’s festival together?

Ladyfag: It’s only our second year, so it’s still all very new and we’re trying things out. I always wanted LadyLand to expand to two days, and wasn’t planning to make that happen in the second year. But it’s World Pride–and it’s the first time the US has even had one so it’s a big deal–so we figured we’d just take the leap & expand.
Montero: What’s it like throwing a queer music festival during an extra special Pride season?
Ladyfag: Pride is an amazing celebration for our community and a time for reflection. Pride started with a riot, and this year is extra special because we’re celebrating the 50th anniversary year of StoneWall. So in that respect, one of my favorite bookings this year is probably Pussy Riot. Nadya from Pussy Riot posted an Instagram message talking about being sent to jail for 2 years in Russia when she was singing about LGBT rights, and how she felt victorious coming to perform at LadyLand for the 50th anniversary of StoneWall. We’ve come so far for LGBTQ rights since Stonewall, but in today’s political climate it feels like one step forward two steps back. Having Pussy Riot there feels like such an honour, and the right vibe for the way LadyLand celebrates Pride.
Montero: Tell me about your thought process of selecting this incredible lineup of queer talent.

Ladyfag : Because we have two days this year and added the second stage all day I had a lot more freedom to play with the lineup…You can never make everyone happy, I think the lineup is well rounded in having something for everybody. If you look at the festivals across the country they tend to have similar lineups with the same artists just rotated. We really tried to find a better balance of people you don’t see at every festival. There are still some of the artists you know and love, but we peppered it with up & coming and more underground DJs and live acts. 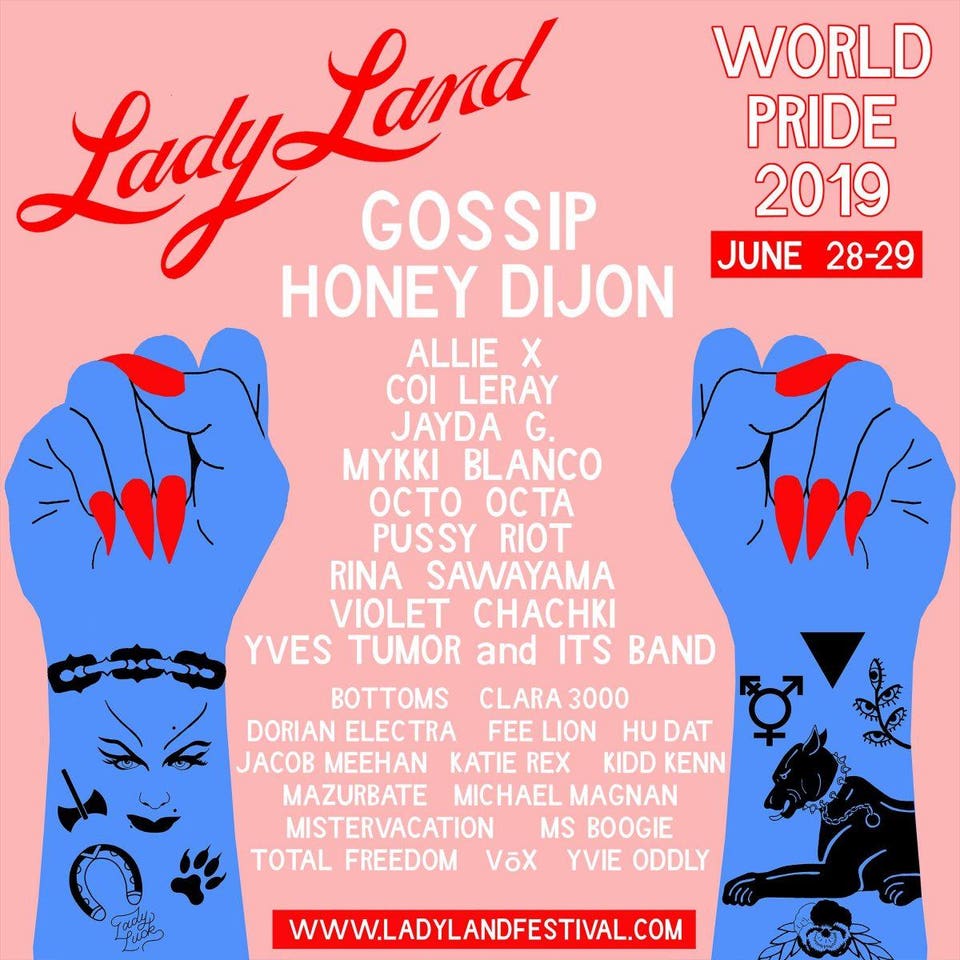 Montero: Are there any acts that you’re particularly excited about seeing?
Ladyfag: I’m pretty excited for Gossip. I was a huge fan, and Beth Ditto is a powerhouse live! They had their reunion tour already set in Europe, but Beth & her team were all into the idea, and moved their rehearsal schedules all around to fly in for this. So their first show back together is going to be on the LadyLand stage–it’s going to be a special moment! Allie X is incredible, I listen to her music at home a lot, I think she’s a talent to watch! Mykki Blanco is an old friend and I’ve watched the trajectory of their career from the beginning, and I must say it’s so refreshing to see an artist so honest with themselves and their audience, they’re the real deal. I’ve been around a long time, and I’ve watched people come and seen what it can take to get somewhere. I’ve worked with Honey Dijon for over a decade, I watched her bust her ass every night of the week for over a decade in small clubs with bad sound systems to become an ‘overnight success’ …now she’s headlining LadyLand on Friday as on the biggest most respected DJs on earth…respect!!!
Montero: What other things have changed since last year?
Ladyfag: Last year we only had one performer in the King’s Hall warehouse and that was a late night performance by SOPHIE. That room has a dark sexy moody vibe and she turned it into one of the highlights of the festival, so I knew I wanted to continue with something more underground with heavy intensity When I watched the new Yves Tumor video (done by one of my favorite artists Floria Sigismondi) I knew it had to be Yves headlining that room. They’re in South America the day before, so it took a while to make the logistics work….but we made it happen and it’s going to be a dark late night fantasy!
Montero: Congratulations on putting together the premier queer music event- how does that feel?
Ladyfag: Thanks! I had wanted to do a festival like this forever! I was always jealous festivals would roll out their lineups cause even though there were artists I wanted to see, I didn’t want to go spend the day with thousands of bro-like dudes! I wanted to create a festival that me and my friends wanted to go to.  LadyLand is put on by queer people, for queer people & people who stand with us. The thought of celebrating the anniversary of Stonewall in a sea of thousands of happy queerdos while Beth Ditto belts out “MEN IN LOVE” makes me feel pretty damn proud this Pride!
[“source=forbes”]