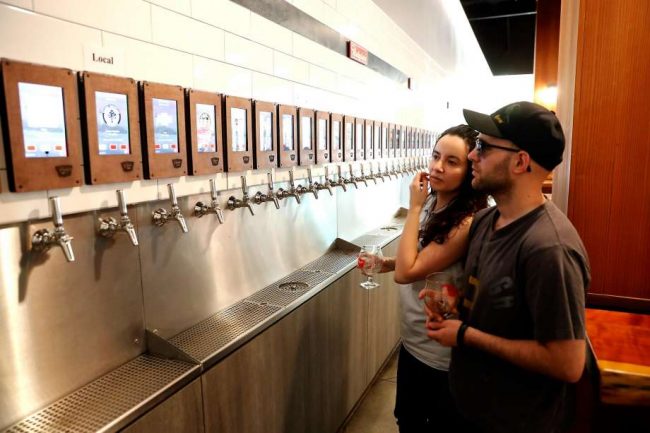 At Pour Taproom in Santa Cruz, customers are free to pour their own beer from more than 70 selections lining the walls, with only the swipe of an ID bracelet. Food can be ordered similarly, with customers tapping choices into iPads, all without ever having to approach a human employee.

A small, four-person staff manages front-of-house operations, while the kitchen is staffed with food prep and line cooks. Pour’s semiautomated model represents perhaps the region’s most intriguing futuristic approach to restaurants and bars.

Considering how new the taproom technology is, software malfunctions can eat into profits. Owner Chris Reno described a night the restaurant’s computer system, which is tied to the automated taps, was rendered inoperable due to a faulty software update. That meant no beer for anyone.“The people have to work in conjunction with the technology,” said Reno.

The restaurant world is a relatively analog industry, built on manual labor. Yet in recent years, it has struggled to reconcile rising wages and staff shortages, prompting more companies to explore automation and robotics as possible long-term solutions to a growing labor problem. And despite headline-grabbing companies like Zume Pizza with its pie-making robots and Cafe X, the San Francisco robot barista outpost, the move toward automation will probably include less dramatic mechanization and more do-it-yourself ordering like Pour.

There were 62,000 people working at eating and drinking establishments in the Bay Area in 2015, according to a report last year by the San Francisco Planning Commission. For now, it’s a growth industry: The number of workers increased about 5 percent annually in 2014 and 2015. And the lowest-paid are getting steady raises, thanks to new regulations. On July 1, San Francisco’s minimum wage rose from $13 to $14 on its way to a $15 floor. Within the next five years, the entire state will have raised its minimum wage to $15.

And there’s money to pay those workers. Between 2004 and 2014, food service businesses in the Bay Area generated $10 billion in revenue for the state, according to the Bureau of Labor Statistics.

According to Gwyneth Borden, executive director of the Golden Gate Restaurant Association, there’s a misconception about the impact automation may have on jobs for the Bay Area’s workforce. Any workers theoretically displaced as restaurants go to lighter staffing models are rapidly absorbed by new hiring — at least for now.

Photo: Michael Macor, The Chronicle
IMAGE 1 OF 4
John Watson works the front desk and is also a server at pour-your-own Pour Taproom in Santa Cruz.

“When restaurants close in the Bay Area, we’ve been able to connect those former employees with employment right away,” she said. “If anything, restaurant owners are looking to automate the service component of their business, but not the kitchen work. I definitely see more tablet ordering in the future, but that’s about it. But full automation, where there’s no human around, is never going to be a total thing.”

It took Frank Klein’s burgeoning Vietnamese chain, Asian Box, based in Palo Alto, five years to move its daily inventory and quality checks to a cloud-based system. The next step, according to Klein, will be to incorporate kiosks that take orders from walk-in customers.

“It’s a response to what customers are asking for,” he said. Asian Box opened a 1,300-square-foot outpost in San Francisco’s Marina district last month. It is staffed with 10 employees, like other Asian Box locations. When the kiosks come into the picture, Klein said, the staffing levels will stay the same so the restaurant can have more hands in the kitchen.

“We get about 30 to 50 DoorDash orders each day. And kiosks make the ordering process faster. We’re not going to ever save money on labor,” he said.

In speeding up ordering, the Bay Area’s smaller outlets are following the lead of global brands, said Borden.

Wendy’s, for example, plans to have ordering kiosks in 1,000 of its restaurants by the end of the year. (There were 258 Wendy’s locations in California as of 2016.) McDonald’s, which has well over 1,400 locations in the state, is installing 2,500 similar kiosks at its locations. The total number of kiosks will increase over the next few years.

Both companies deny the technology will cost jobs. But it may well allow them to fill more orders with fewer workers.

Other types of restaurant automation are gaining steam on a global scale. In Shanghai, a ramen-making robot is lauded just as much as its counterparts at a robot-run KFC. Suzumo, Japan’s largest manufacturer of sushi machines, produced a robot capable of rolling thousands of pieces within an hour. Momentum Machines — the company behind the prolific burger-flipping robot said to one day replace burger joint line cooks — easily secured investments from firms like GV, the venture arm of Google parent Alphabet; it raised a reported $18 million in June.

Deepak Sekar, founder of Chowbotics, the company behind a salad-making robot, says robotics will eventually move on to creating more sophisticated types of food over the next few years, allowing more restaurants to move toward automation.

“If you go to Chipotle, there’s three people in line just putting toppings on a burrito. That could be done by a robot. Mexican food may be the next frontier,” Sekar said. “Even with pizzas, you normally see three to four people standing in line, and a robot could do that as well.”