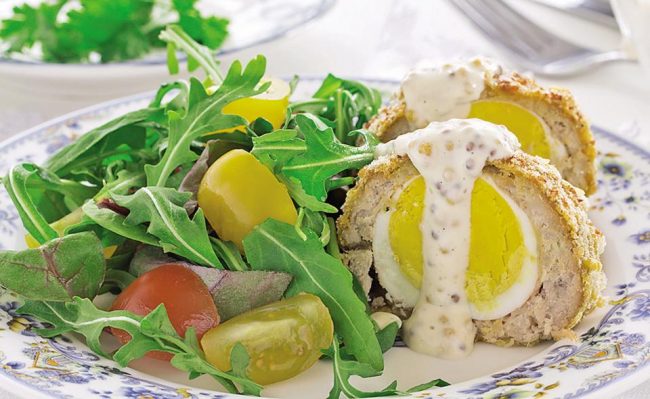 Over the last two decades, chefs in the West have taken relatively humble dishes and tried to turn them into something special. The hamburger is one instance. In the late 1980s and early 1990s, most American chefs did their own riffs on the burger, including, perhaps most influentially, Daniel Boulud’s version at DB Bistro Moderne in New York. This used high-quality beef, foie gras and every other luxury ingredient Boulud had lying around in his kitchen.

Then, it was the turn of the boring old Mac and Cheese to get the haute cuisine treatment. These days, fancy chefs will add slices of black truffles to the cheese (the flavours go well) while lesser chefs will mistakenly believe that they are elevating the dish with liberal use of synthetic truffle oil.

British chefs took longer to catch on and when they did, the luxury updates focussed on better cooking skills and ingredients: good fish and superb frying for fish and chips; triple-cooking of chips for the perfect texture, pigs-in-a-blanket or bangers and mash made with artisanal sausages etc.

I like the idea of upgrading dishes though, frankly, one often gets tired of the newer versions fairly quickly. I would never order a so-called gourmet burger, for instance. And very few of the upgrades actually last; most fade as new trends develop.

These are a few exceptions though. Joel Robuchon’s pommes puree have become the benchmark for upmarket mashed potatoes. Anton Mosimann’s Bread and Butter Pudding has transformed the way that old nursery favourite is cooked. And though Heston Blumenthal’s triple-cooked chips are difficult to pull off (even the ones I had at Heston’s own The Hind’s Head were rubbish), that hasn’t stopped chefs from using “triple-cooked chips” as a menu cliché.

One such dish that has become a favourite of chefs who want to upgrade old comfort staples is the Scotch egg. If you have tried one of the industrially manufactured versions in the UK then you will know how disgusting mass-produced Scotch eggs can be. The pork component consists of cheap sausage meat, which is basically mince made from the parts of the pig that nobody wants to buy. And the inside is a tough, hard-boiled egg, laid by a battery chicken in an industrial operation somewhere.

Why should the fortunes of the Scotch egg concern us? Well, because it is an Indian dish

So, it was relatively easy for chefs to upgrade the dish. All they had to do was to use good quality free-range eggs and proper sausage meat.

As the remake grew in popularity, newer versions emerged. One obvious route – to indicate that the dish had been freshly made – was to soft boil the egg (the original dish calls for hard- boiled eggs) so that a liquid yolk oozed out when you cut into it. A second was to change the batter. At one of Bruce Poole’s restaurants in London (it may have been La Trompette) I had an interesting Scotch egg over a decade ago: the egg was soft-boiled, the batter was panko (which is of Japanese origin) and they had used good quality truffle oil to add another layer of flavour.

These days, the upmarket Scotch egg turns up again and again as a canapé. Chefs use quail’s eggs, which are much smaller than hen’s eggs and you are encouraged to pop the whole thing into your mouth at one go.

Why should the fortunes of the Scotch egg concern us?

Well, because it is an Indian dish.

This is not something Brits are ready to accept. The London store Fortnum & Mason even claims to have invented the Scotch egg. And there have been many theories about the name because it is clearly not a traditional Scottish dish. One theory even has it that the recipe was first written down by the author of Ivanhoe, who was called Sir Walter Scott. And so, rather than call it the Ivanhoe Egg, they named it after the author – Scott became Scotch.

But I will go with the views of the late Alan Davidson, the greatest food historian of the 20th century. Davidson says that British soldiers ate our Nargisi kofta curry and loved it so much that they tried to recreate it at home. The original curry had a tomato gravy and when this proved too difficult to reproduce in Britain, they started using a hot sauce instead. It was a small step from eating the koftas with a bottled sauce to serving them on their own and leaving it to individuals to decide which condiment they wanted to use.

That’s how the dry Scotch egg was created and today, its Indian origins are either forgotten or denied outright. I have read many outlandish theories about its origin. One states that it was invented as a fish-mince dish in Yorkshire by an establishment called William J. Scott and sons – hence the name Scotch egg. Another ascribes Algerian origins to the dish, which might have been slightly plausible had Britain (rather than France) colonised Algeria or if there had been mass Algerian immigration to the UK.

We know that the first British recipe for a Scotch egg turns up in 1826 and calls for the dish to be eaten with gravy. This fits in nicely with the Raj origin theory: all the we-Brits-invented-it nonsense works on the assumption that a dry Scotch egg was the original. But as that early recipe proves, it started out as a gravy dish.

But where in India did the British find the original Scotch egg/Nargisi kofta?

One view is that it is a Hyderabadi dish but I have met chefs from Lucknow who say that it is part of their tradition. And let’s not forget that kofta is a Middle Eastern word. So my guess is that some enterprising Indian chef in the middle ages was experimenting with a new kind of kofta curry when he came up with this dish.

It could have been invented in North India and then travelled to Hyderabad or the journey could have taken the reverse direction. Either way, it is hard to find a good Nargisi kofta in either Lucknow or Hyderabad these days.

When the food writer Anissa Helou was researching her masterly Feast: The Food of the Islamic World, I had dinner with her at the Maurya in Delhi. Though she enjoyed the Dum Pukht biryani, she told Gulam Qureshi, the chef, that she had searched in vain for a good Nargisi kofta in India.

Gulam wandered off and then, towards the end of our meal, he returned with a plate of Nargisi koftas. They were outstanding. Anissa loved them and a recipe for Nargisi koftas (and this story) ended up in Feast.

Last week, I phoned Dum Pukht and asked Gulam if he could make some Nargisi kofta for dinner. And he was kind enough to do so. But this time he made the original dish: a curry.

This was the classic version, he explained. The last time around, he didn’t have the keema required to make the koftas so he had used the mixture that goes into Kakori kebabs instead.

I am nobody to argue with one of the country’s best Avadhi chefs but while his gravy version was terrific, I much preferred the improvised Kakori-mince version.

Gulam’s Nargisi kofta is not on the Dum Pukht menu yet but he is working on putting the dish on his tasting menu. Let’s see which version he goes with.

Sadly, even Manish Mehrotra has taken his modern Nargisi kofta off the Indian Accent menu.

Influenced perhaps by the Scotch egg revival in the UK, Manish tried to create a kofta in which the yolk stayed runny. He poached the egg, threw away the white and put the yolk in the centre of the kofta.

Then, he found he had a problem. In the time it took to cook the mutton mince, the yolk solidified. So Manish decided to use chicken mince which cooks much faster and lets the yolk stay runny. The dish was a great hit in its time but Manish has now moved on.

Much of Manish’s food has its roots in humble dishes that he modernises and upgrades (the famous Daulat ki chaat, for example). Gulam’s food, on the other hand, is largely faithful to the Avadhi court cuisine tradition. But that’s the beauty of the Nargisi kofta. It works brilliantly as both a modern and a traditional dish. It is a true Indian classic.

As for the British Scotch egg; they can keep it. We much prefer the original.