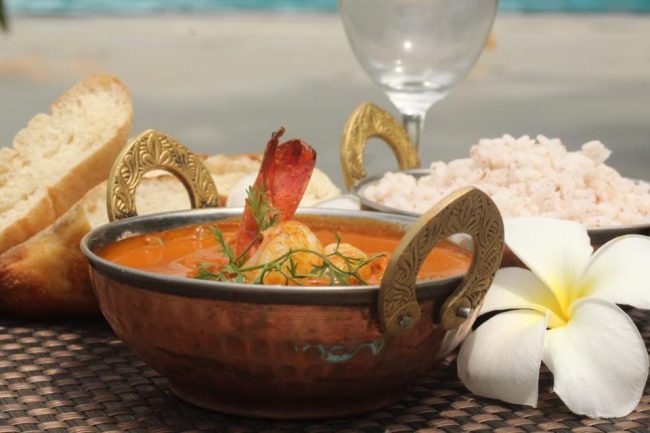 Goa has a coastline of 101 km and seafood is second nature to Goans, as is rice, their staple crop. The soil is rich in minerals and humus, thus conducive to plantations, especially of spices, fruit and nuts. Making efficient use of the water sources, the terraced orchards support coconut palms and fruit such as jackfruit, pineapple and mango. The heat and high humidity though, restrict the crops to tropical fruits and vegetables like giant okra, aubergine, plump pumpkins and bottle and ridge gourds. Intrinsic ingredients in Goan food are red, unpolished rice to mop up curries; palm jaggery for sweetmeats and desserts; and local breads known as pao, baked fresh twice a day – in particular the healthy, whole wheatpoiee.

The fruit of the sea

Seafood is a staple for most Goans. Fish and prawns are even sun-dried earlier in the year to make sure that the Goan lust for seafood is satisfied during the monsoon, when the glamorous big catches are not available. Goans eat any kind of fish, from the fancy lobster, jumbo prawn and pomfret, to the modest clam, mackerel, small mud crab, and mussel. Fish is frequently coated in a red masala and fried in a dusting of fine semolina; stuffed with a red spice paste known as reichado, or dunked into velvety smooth coconut curries. The monsoon brings in a whole new selection of fish caught in river estuaries as they swim up-stream or raised in salt pans, which the locals swear are more flavourful than sea fish.

Goan food is divided into dishes cooked by Catholics and those cooked by Hindus. The Goan Catholic repertoire has a fiery red local soul and a Portuguese spirit. The Goan Hindu kitchen uses the same indigenous ingredients, but they throw in tamarind as a souring agent instead of the pungent toddy vinegar and kokum. And the Goan Hindu kitchen, which has a vast repertoire of dishes, is confined to small eateries and homes within Goa, whereas Catholic dishes are notoriously famous both in Goa and abroad.

What unites everyone in Goa is the prawn curry or as they say in Konkani, ‘sungta chi kodi’. My grandmother was Goan and a marvellous instinctive cook. She used to say that the prawns fished from rivers and the backwaters of Goa were sweeter than those from the sea and so she used only that variety in her famous prawn curry and balchao. She also insisted on cooking in a terracotta pot and using well water to grind the coconut for the silky smooth velvety coconut milk which went into the curry.

A taste of home

I recently had a divine prawn curry at the Novotel Dona Sylvia in south Goa. It rivalled my grandmother’s and felt like “home”. The only difference was that the masala paste was ground with coconut so it was slightly coarse whereas my grandmother would stir slightly thick coconut milk into the cooked masala paste, which made hers completely smooth. Some people use kokum to add a sour note. Others use tamarind. The thick, bright red curry paste is always made with mild red Kashmiri chillis (which don’t come from Kashmir at all but Guntur in Andhra Pradesh). I suppose the word Kashmiri was coined to denote the spice level. Goans used a large dried red chilli in the paste, which is not commonly found nowadays. Plenty of garlic, a bit of ginger, turmeric, some good local black pepper, cumin and sometimes dried coriander are all that you need for a perfect Goan prawn curry masala. And of course you must remember to add the prawns at the very end so that they don’t overcook and turn to leather.

Novotel is lucky enough to have chef Carmelino Luis and he cooks homestyle Goan food like a pro. His rissois, bite sized little moon-shaped appetisers, have a soft, flaky pastry and unctuous creamy prawn filling. His kismur, a staple of the Hindu Goan menu is made with a dry prawn commonly found in Goa known as sookhem, or a smaller one with a more delicate flavour known as galmo. An exquisite version is made where the dish is smoked after tossing.

Every family in Goa has its own recipe for this famous dish of Goa. Little differences in the recipe distinguish whether the cook is from the north or south of Goa, whether he/she is Hindu or Goan, Brahmin or not. All this can be revealed through one simple curry! Here goes.

In a blender, make a fine paste of garlic, whole red chillies, grated coconut, coriander seeds, cumin seeds, tamarind pulp and turmeric powder and keep aside. In a pan, heat oil, sauté chopped onion till translucent. Add tomatoes and green chillies and sauté for another few minutes. Add the masala paste and radish, salt and cook till the paste releases some oil. Now add two to three tablespoon water and cook the masala for a further two to three minutes. Add the prawns and cook till just done. Thicken with the freshly-squeezed coconut milk. Check seasoning. Garnish with fresh coriander leaves. Serve hot with Goan rice