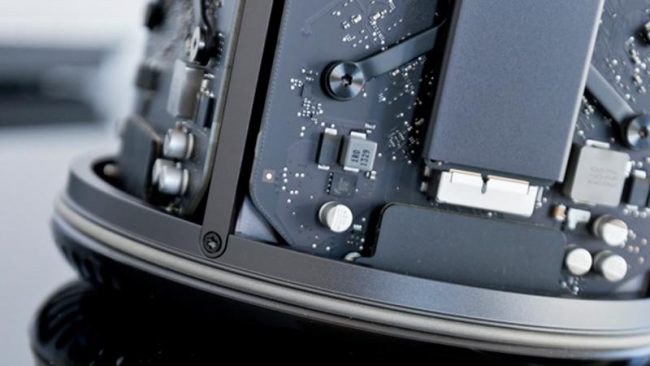 We’ve had a long wait for a new Mac Pro. The current Mac Pro model was announced at WWDC in June 2013, shipping that December (actually in many cases it didn’t ship until 2014) and, for a top-of-the range system, it’s looking pretty long in the tooth. But here’s the good news: all that is about to change.

In the short term, Apple lowered the price on the higher-end Mac Pro options. The 6-core Intel Xeon processor, dual AMD FirePro D500 GPUs and 16GB of memory option dropped from £3,899 to £2,999; while £3,899 now gets you an 8-core processor and dual D700 GPUs. Click here to browse the options.

But in the longer term, and much more excitingly, Apple has announced a completely redesigned Mac Pro – although we don’t yet know if this will appear by the end of 2018. In this article we weigh up all the news and clues concerning the next Mac Pro update.

What has Apple revealed about the new Mac Pro?

In April 2017 Apple invited journalists to its Product Realization Lab and made a series of announcements relating to the Mac line, revealing among other things that Apple is working on a major revamp to the Mac Pro. Apple revealed that they are “completely rethinking the Mac Pro”.

At the time, Apple’s Senior Vice President of Worldwide Marketing Phil Schiller said: “We have a team working hard on it right now. We want to architect it so that we can keep it fresh with regular improvements, and we’re committed to making it our highest-end, high-throughput desktop system, designed for our demanding pro customers.”

It turns out that Apple’s 2013 cylindrical redesign of the Mac Pro, which it took on when it was relaunched in 2013, made it too difficult for them to issue an upgraded system. More on that below.

The Mac Pro is very much a work in progress, though, with a launch date not pinpointed; Apple hasn’t even confirmed it will happen in 2018.

Schiller said: “Now, you won’t see any of those products [also including a Pro display] this year [2017]; we’re in the process of that. We think it’s really important to create something great for our pro customers who want a Mac Pro modular system, and that’ll take longer than this year to do.”

The next we heard of the Mac Pro was in a press release following WWDC. Apple didn’t talk in any detail about the Mac Pro on stage during the WWDC keynote in June 2017, but the press release regarding the new iMac Pro included confirmed that it is also “working on a completely redesigned, next-generation Mac Pro architected for pro customers who need the highest-end, high-throughput system in a modular design, as well as a new high-end pro display”. Here’s all the news from Apple’s WWDC keynote.

When the iMac Pro launched in December 2017 Apple added a closing paragraph to the press release about the iMac Pro, stating that: “In addition to the new iMac Pro, Apple is working on a completely redesigned, next-generation Mac Pro architected for pro customers who need the highest performance, high-throughput system in a modular, upgradeable design, as well as a new high-end pro display.”

Apple hasn’t specifically said that the introduction of the new Mac Pro would happen in 2018 (perhaps to avoid accusations of delays), but that seems like the most likely year for launch.

What we do know is that it will take longer than a year from April 2017, so the earliest date we can conceivably expect is April 2018.

A summer 2018 launch, probably coinciding with WWDC 2018, seems likeliest. We expect to at least see a preview of the new Mac Pro at WWDC in June 2018 – and that would be exactly five years after Apple launched the current Mac Pro.

Speaking of which, the current Mac Pro was first shown off at WWDC in June 2013 but didn’t launch until that December, so conceivably we could be looking at a similar timescale for the new Mac Pro, with availability coming at the end of 2018.

However, it could take even longer. We may be waiting until 2019 before the Mac Pro is relaunched, according to OSNews sources. Apparently, “the Mac Pro was in limbo inside Apple. The decision to go ahead and develop a modular Mac Pro replacement seems to have been made only in recent months, with development starting only a few weeks ago,” according to the report which was published in April 2017.

The report author thinks that it will take a long time to develop a new Mac Pro, and concludes: “I think we can expect the new Mac Pro late 2018 at the earliest, but most likely it won’t be until early 2019 before it ships.”