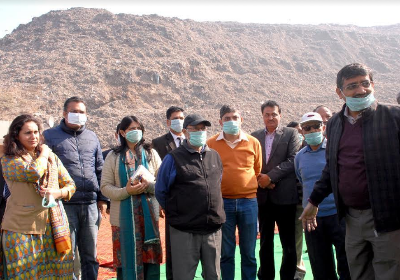 The instructions followed after LG inspected fix compactor transfer station (FCTS), a garbage processing infrastructure, installed recently at New Friends Colony. FCTS aims to make the areas where they are located dhalos free. The project involves collection of waste from streets by auto tippers to FCTS from where the waste, after compressing, is taken to the waste to energy plant.

SDMC commissioner P K Goel, who accompanied the LG, said FCTS has replaced the work of dhalaos in the areas. “The garbage earlier collected at open dhalaos is now collected in FCTS. It has led to a visible change in cleanliness,” Goel told LG.

FCTS caters to large areas resulting into less number of dhalaos. After processing, the volume of garbage is significantly reduced and the remaining garbage is transported to waste to energy plant everyday resulting in non-accumulation of garbage at the dhalaos. Unclean dhalaos lead to deteriorating sanitation conditions in areas where they are located and threatens outbreak of diseases.

An impressed LG directed officials to install FCTS one in each SDMC ward – there are 104 wards in south. “The FCTS will be installed in South and West zones of SDMC in next 3 months. The infrastructure would be developed in Nazafgarh zone as well,” said an official. So far 15 FCTS have been installed in Central Zone.

LG’s interest in improving the environment of the city led him to inspect waste to energy plant at Okhla and Okhla landfill site. The dump yard of 150 feet height often catches fire and is considered to be one of the major factors behind national capital’s toxic air quality. Authorities claimed in last one year no fire has been reported at landfill site except on Diwali and Guru Nanak Jayanti.

Since he took over LG is concerned with the poor sanitation conditions in Delhi and has chaired meetings for improving the condition of landfill sites. On Saturday LG dedicated to the people newly procured heavy duty bulldozers and excavators for managing the landfill site.