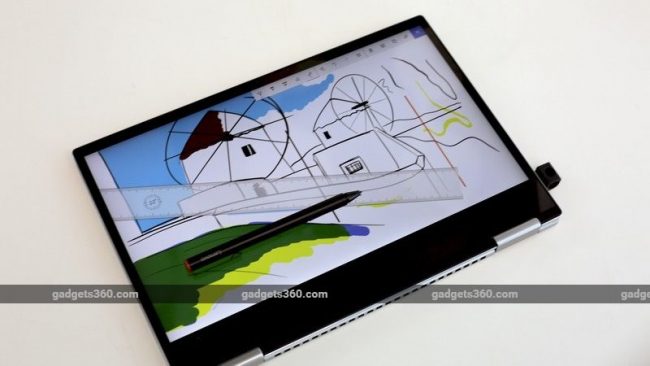 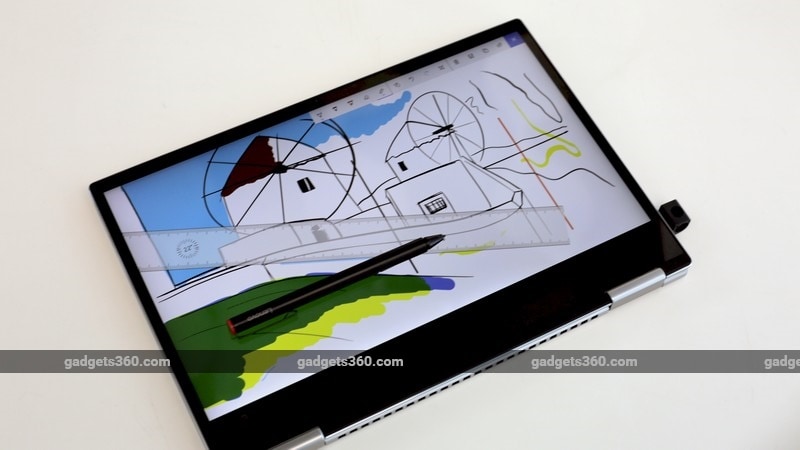 PC manufacturers are struggling to keep their quarterly results looking good, and it isn’t easy to sell high-end laptops. While some companies like Asus are experimenting with outlandishly expensive models for very niche audiences, others are focused on style and slimness. Premium hybrids or 2-in-1 laptops continue to be a big focus, and pricey as they may sometimes be, they do make excellent portable workhorses.

Lenovo has sent us its new Yoga 720-13IKB hybrid 2-in-1 which is part flagship Ultrabook, part tablet. This particular variant retails for Rs. 1,10,470 online and is the highest-end one available in India. It ships with Lenovo’s Active Pen which can be used with the Windows Ink Workspace in Windows 10, which lets you sketch and scribble notes naturally. Competing directly with the Dell XPS 13 2-in-1 and the HP Spectre x360, let’s see how the Yoga 720 stacks up against other heavyweights.

The 13.3-inch form factor is popular around the world as it’s versatile enough for productivity without compromising on portability. Lenovo has done a splendid job with the design of the Yoga 720. Its weight is well distributed all around so the 1.3kg device is barely any trouble to balance. It’s also satisfyingly slim at roughly 14.2mm.

The body and lid are built from aluminium, making them very resilient to flex. The metal backing for the display provides ample rigidity, so much so that we had nearly no pixel distortion even after forcefully applying pressure to the lid. The matte finish of the body is easy to keep clean as it doesn’t attract smudges or fingerprints easily. Since this is a hybrid, the screen folds back a full 360 degrees when you need to use it as a tablet. The hinges have good torsion and keep the lid open securely at nearly any angle for when you wish to use this device in Stand or Tent mode. 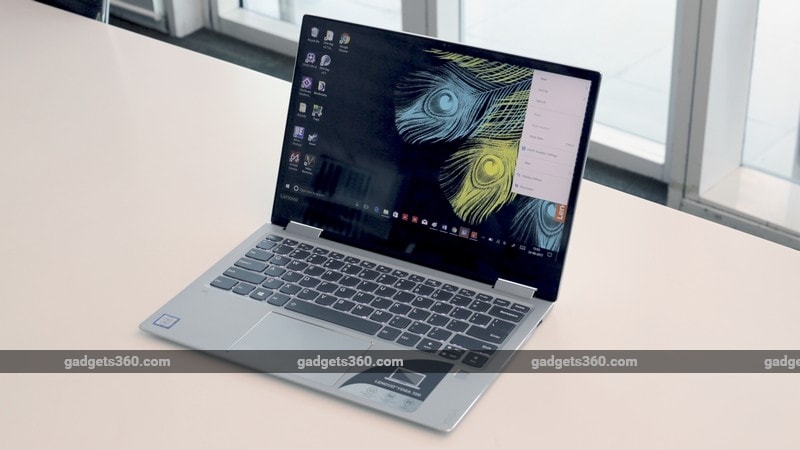 We quite like the quality of the display panel used on the Yoga 720. It’s a 13.3-inch, full-HD IPS touch screen which has good colour saturation and wide viewing angles. Lenovo calls it an ‘AntiGlare’ panel but the glossy finish tends to be quite reflective, especially in areas with lots of focused lighting, like an office. Brightness is good but it could have been better, and we often found ourselves bumping it up nearly all way under indoor lights.

The base of the laptop has a backlit power button and a full-sized USB 3.0 port on the right, and two USB Type-C ports, a headphone/ microphone combo socket and a recessed button for Lenovo’s OneKey Recovery system on the left. The first USB Type-C port is a standard USB 3.0 port that can be used for charging the laptop or data transfers, while the second one is a Thunderbolt 3 port, so it can be used for charging, for much faster data transfers, and video output using a DisplayPort-compatible monitor. The Yoga 720 can be charged with a power bank too, which is very handy feature to have but won’t be as fast as using the bundled charger. What’s missing here, is an SD card reader.

We have a chiclet style keyboard with two intensity levels for the backlight. The keys are evenly bathed in a white glow which isn’t distracting in the dark. We also like the spacing of the keys, and their travel is good for typing. The direction key cluster could have been better as the Up/Down keys are much smaller than the Left/Right keys and are squished together. The palm rest area has good spacing despite the compact body, with an equally large trackpad. We also have a fingerprint sensor at the right.

The speakers are placed on the bottom of the laptop, along with vents for air intake. The exhaust vents are concealed between the two hinges. In laptop mode, the exhaust vents aren’t an issue but in tablet mode, there’s no escaping the warm air being expelled.

In the box, you get a 45W charger, some documentation, and the Active Pen. This is a digitiser-based pen and requires a single AAAA battery. We would have preferred a built-in rechargeable battery. The pen comes with extra tips and a plastic holder which fits into a USB port so that you can keep it attached to the Yoga 720. 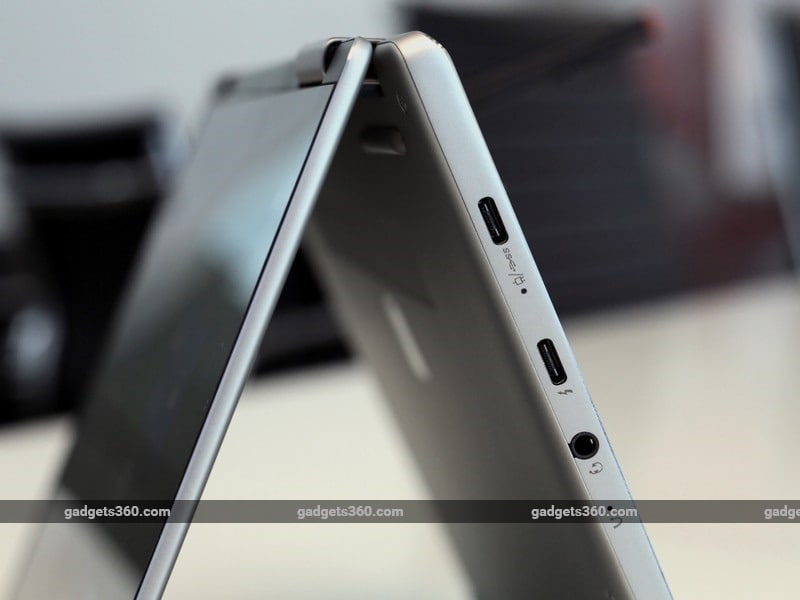 The Yoga 720 ships with Windows 10 Home 64-bit, along with Lenovo’s usual software. This includes Lenovo Companion, which lets you check for driver and system updates and Lenovo Settings, which helps you manage battery profiles, audio settings, and display preferences. You can also enable a feature called Paper Display which automatically adjusts the level of blue light filter based on ambient lighting. Lenovo App Explorer gives you a curated list of Windows Store apps. You also get a full version of Microsoft Office 2016 Home and Student edition, and a year’s subscription to McAfee LiveSafe.

As a laptop, the Yoga 720 works like a charm. Booting is really quick thanks to the PCIe SSD, and programs are quick to load. During our testing, we used the laptop as our primary work machine for a few days and weren’t disappointed with its performance. The maximum brightness level of the display did pose a slight issue at times, but other than that, we didn’t have much to complain about. The laptop doesn’t heat up unless you’re doing something graphically intensive, in which case the base gets a bit warm. The exhaust fan is also audible when gaming but it’s not excessively loud.

Windows automatically disables the keyboard when you switch to Stand or Tent mode. The screen’s capacitive touch response is very good but the main highlight here is the Active Pen. It’s built well and light enough for comfortable use. There are two buttons near the bottom that mimic the left and right click of a mouse. You can hover the pen over icons and menus, which mimics a mouse cursor motion. The pen is also pressure sensitive, which can be put to good use in drawing apps like SketchBook. Latency is pretty low but performance also depends on how well the app is optimised. For instance, there was visible lag when drawing in Paint 3D, but in apps like SketchBook, the results were more akin to drawing with an actual pen on paper. You can even buy more advanced apps such as Photoshop Elements or Expresil from the Windows Store for serious sketching. 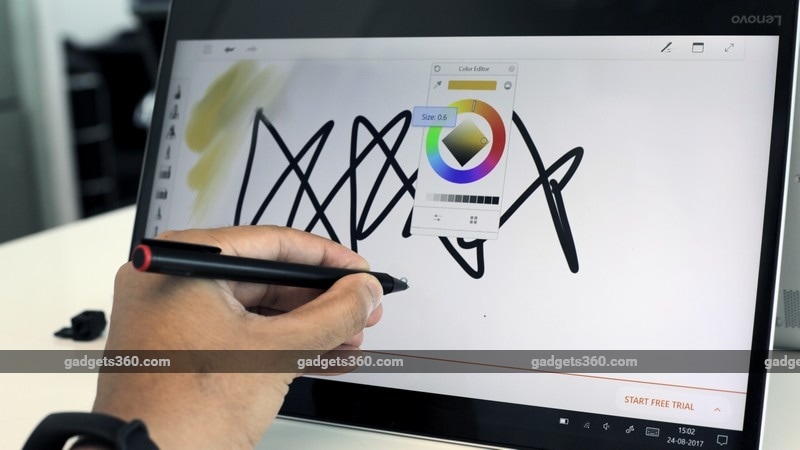 The Windows Ink Workspace is enabled by default, and can be accessed from the taskbar. From here, you can open Sticky Notes to jot down quick memos, Sketchpad for scribbling, and Screen Sketch, which takes a screenshot of whatever you’re doing and lets you add notes or illustrations before sharing or saving it. This workspace also shows you recently opened apps and suggests other pen-friendly apps.

There’s no way to customise this workspace by adding more apps or even replacing the default ones. The Settings menu for Windows Ink lets you choose if you are left- or right-handed, but other shortcuts seem to need a Bluetooth-enabled stylus like the Surface Pen. You’ll also find a shortcuts for handwriting input in the Edge browser and Windows photo viewer, for making quick notes.

Coming to the laptop’s performance, the scores we got in benchmarks were more or less on par with those of other laptops we’ve tested with this CPU. In PCMark 8, we got 3282, 3139, and 2960 for the Home, Creative, and Work test suites. Graphics performance isn’t good enough for proper gaming but casual games like Asphalt 8: Airborne from the Windows Store run just fine. The laptop works fairly well as a tablet too, as long as you have a surface to place it on. Single-handed use gets fatiguing very fast, as, let’s face it, this is no iPad. 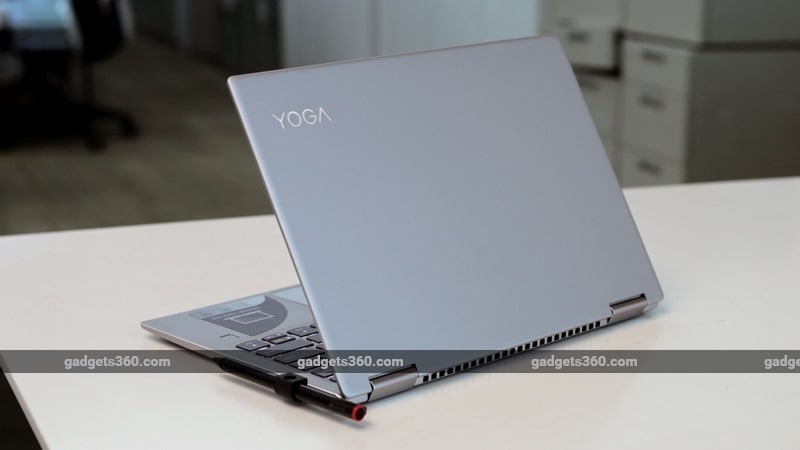 The Yoga 720 does well with multimedia content. The sharp and vivid display is great for watching movies on, and audio is not too shabby either. The speakers are designed by JBL and we have Dolby Audio Premium software enhancement working alongside. Due to their placement, it’s easy to muffle them with the device placed on your lap, but they do get decently loud otherwise. Bass response is pretty much non-existent but the highs aren’t shrill and vocals are decent. The software does manage to simulate a wide soundstage, which makes the sound seem fuller. The HD webcam also delivers good quality and images weren’t too noisy even under dim light.

Lenovo claims up to 10 hours of battery life but this was most likely achieved in a highly controlled environment. With our regular use, which mostly involved browser-based work (with lots of opened tabs) and music streaming over Wi-Fi, we managed to average around 6-7 hours of usage. With continuous heavy work, which PCMark 8 simulates nicely with its battery test, we managed 4 hours and 17 minutes. For a 4-cell battery in this form factor, we would say that’s not too bad.

The Yoga 720-13IKB turns out to be a very good Windows 10 hybrid laptop, and justifies its premium price. If you buy it through Lenovo’s official online store then you can save Rs. 10,000 off the sticker price. The bundled Active Pen is also a nice bonus. As far as competition is concerned, this model offers better value than others with similar specs and features. The only variant of the Dell XPS 13 2-in-1 that we can find as of now is the 9365 model, which is priced at Rs. 1,35,990 and ships with an active pen. It has a higher resolution (1800×3200) display and has a lower voltage Core i7-7Y75 CPU, which means it wouldn’t need active cooling.

HP has a similar solution too with the Spectre x360 13-ac059tu, which is nearly identical in terms of specifications (expect for the 16GB of RAM) to the Yoga 720 but costs a lot more at Rs. 1,57,419. Plus, there doesn’t seem to be any mention of a bundled stylus.

Overall, there’s not much to fault the Yoga 720 on as it delivers very good build quality, a sharp display and good Windows and app performance. Battery life is decent, as long as your usage is frugal. It also works well as a tablet and the bundled active pen puts the touchscreen to better use. A few things could have been better, like having a brighter display, an SD card reader, sensible spacing between the Up/ Down direction keys, and perhaps upward-firing speakers.

If you’re in the market for a competent hybrid laptop and have a flexible budget, then we recommend giving the Yoga 720 some serious thought.