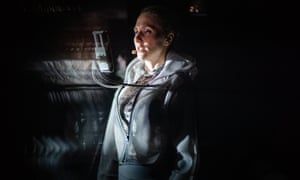 In the Arctic Circle during the dim days of February, reality becomes a little attenuated. At 10am, it’s still dark, the streetlights colouring the pavements pale orange and making sallow shadows of the trees. When the forecast announces that today it’ll only be -11C, there’s a palpable sense of relief: someone gruffly makes a joke about global warming. By early afternoon, you’re into dusk, a meditative dwindling and diminishing that makes you wonder if it ever really got light. For what seems an eternity, the sky is rimmed with whitish-pink; the snow goes through every shade of blue, from azure and ultramarine through to deep indigo. The sense is that winter has frozen not only the ground, but time itself.

Given the sensory intensity, it’s little wonder that the wintry far north has proved so seductive to musicians and artists – or festival organisers. The Dark Music Days gathering in Iceland has been a mainstay of the experimental scene for 40 years, encouraging Europe’s most innovative composers and performers to flock to Reykjavik during late January. More recently, it’s been joined by Svalbard’s Polarjazz festival, Tromso’s Insomnia and at least two separate events, in Canada and Norway, named after the northern lights.

The newest of the bunch is Inversia, in the remote Russian settlement of Murmansk, the largest city in the Arctic Circle, which is close to the Norwegian and Finnish borders. Only four years old and just two-and-a-half days long, this boutique event is making a name for itself with a quixotic blend of electronica, jazz and contemporary classical music, lectures, workshops, film, art, and plenty that’s uncategorisable. In cultural terms, winter in Murmansk has traditionally been as dark as the city itself, barring the end-of-January celebration to mark the end of the 40-day polar night – a riot of accordion music, pancakes and ice-dancing. Inversia wants to push things a little further.

The name announces this intention to invert expectations, its founders Oleg Khadartsev and Zhanna Guzenko tell me when we catch up in Murmansk’s dour, Soviet-era College of Arts. Both are longterm Murmanskers; Khadartsev is a native, while Guzenko’s family moved here when she was a child. In their early 30s and late 20s respectively – a former journalist and a student of international relations – they considered doing as many of their friends did, and getting the hell out as soon as they could (from a peak of half a million before the collapse of communism, Murmank’s population is now something like 300,000).

Instead they decided to dig in. Khadartsev set up a small producing hub, Fridaymilk; Guzenko started curating her own projects. In 2017, they launched Inversia, describing it as an “audiovisual” festival to keep their options open. The idea was to connect and showcase artists from across the high north.

“But really we had no idea what it would be,” says Khardartsev with a slow grin. Guzenko cuts in: “It sometimes feels as if we still don’t. Everything comes together only at the last minute.”

That DIY sensibility animates Inversia’s programming, which leans into the improvisational and the anarchic. In addition to that Soviet concert hall, lined in wood and dominated by dour portraits of Tchaikovsky and Rachmaninov (“incredible, isn’t it,” Khardartsev sighs), this year’s venues include several hotel bars, a local cinema, Murmansk Regional Scientific Library and the city’s number 11 bus route (the latter is part of an acoustic installation called Just Take Time to Listen, by the Russian artist Gleb Glonti).

A lecture by a local philosopher on the darkness of the city sits cheek by jowl with a “sonification” project generating audio from migration statistics. DJs from Switzerland and Denmark rub shoulders with film-makers from Norway and Finland. Audiences come from similarly far-flung locations: in addition to people who had flown in from abroad and a sizable squad of locals, some had driven from Finland and Norway, eight-plus hours on wintry roads. Boutique though it is, Inversia is on a roll. Last year, Guzenko and Khadartsev estimate that around 5,000 people came; this year, it’ll likely be near 8,000.

Everything I experienced over the weekend emphasised the porousness of boundaries – between light and dark, classical and ambient electronics, art forms, nation states. For me, the stars of the jazz programme were the young Minsk-based trio Soyuz, who referenced severe krautrock and 80s-style synths but coloured them with sunny doses of Europop, courtesy of their male lead singer’s sugary-sweet vocals (soyuz meaning “union”, perhaps ironically given Belarus’s struggles to escape Russian influence).

The night before, one of the late-night sets featured a duo called Glava II, whose collaborators hail, respectively, from the Murmansk region and St Petersburg, a thousand miles south. Billed as offering “darkwave, techno and folklore”, the pair conjured ominous low roars and screeching howls from bass and live electronics. The folkloric elements passed me by, but dark it undeniably was.

Courtesy of the British Council, two British acts even made it on to the bill: the post-classical composer Roly Porter, and the hotly tipped Belfast-based jazz group Robocobra Quartet, led by drummer-vocalist Chris Ryan. After playing a taut, incantatory set that got the crowd into full pogo mode, Ryan seemed bemused to make it this far north, having just played dates in Moscow and St Petersburg. “It’s amazing to make it up here, and for people to be so welcoming,” he said. “Northern people make their own warmth.”

For their own part, Khadartsev and Gulzenko encourage the artists to reflect on the idea of what it means to make work at the ends of the earth. “It’s about the environment, the way we express ourselves,” reflects Gulzenko. “The space is heard on different frequencies.” Khadartsev is nodding: “The darkness is a reason to look inside. It’s a kind of meditation; if you find your way, you can go deep.”

The British Council’s presence here is in itself a minor miracle. Officially, the organisation was told to “cease operations” by the Russian state during the diplomatic fallout from the Salisbury poisonings in 2018. But a core team set up shop inside the British Embassy in Moscow, and has carried on with, if anything, more energy than before. Their involvement with Inversia is part of an ongoing UK–Russia Year of Music, which has seen some 200 events, over 400 British artists and cultural leaders visiting locations across Russia, and exchanges involving in excess of 1,500 Russian musicians and ensembles. Though the British Council officially doesn’t exist in the country, it continues collaborating as best it can – including with some of the ministries that asked it to leave. “A very Russian compromise,” its director, Michael Bird, tells me.

Up in Murmansk, Guzenko and Khadartsev’s collaborations with the community that surrounds them is perhaps the most distinctive aspect of what they’re doing. Unlike too many festivals, which cater to peripatetic, multinational artists and audiences – this week Helskinki, next month Rome – Inversia seems determined to look after its roots. One of the premieres at this year’s festival featured the Russian composer and sound artist Ilia Pucheglazov, who performs under the name Symphocat, and the Barents Kamerata, a scratch chamber group drawn from the local symphony orchestra and students.

In a piece called Dedication to the North, Pucheglazov offered sampled field recordings of wave noise, footsteps scrunching through snow, tectonic grumblings, and wind whipping across what sounded like a frozen tundra. Alongside these atmospherics, and sometimes over them, the string players contributed slow-moving ice floes of sound, in the manner of Philip Glass or Nils Frahm. Musically, it wasn’t the most demanding experience, but witnessing the delight of the players at having participated in a work like this more than made up for it.

And music, perhaps, wasn’t the only point. On my last afternoon in Murmansk, during a break in the blizzard, I headed out to experience Glonti’s urban acoustic intervention, Just Take Time to Listen, carrying a map bearing the locations it was taking place in. Initially, I was stumped: despite standing, as requested, inside the door of the railway station and by the sea terminal, there was no sign of speakers or any hint of an installation, acoustic or otherwise.

Then, as the light came down, the penny dropped: Glonti was asking me to listen to the particular sonic textures of the city itself. I tried again, closing my eyes and trying to ignore the cold seeping into my fingers. Heard from a railway bridge, there was the rasp of a worker’s shovel scraping snow, mingling with the grumbling of container lifts at the seaport and the occasional distinctive toy-like whistle of a Russian train. By the arts college, there was the rustle of fir trees and the churning swoosh of cars negotiating ice, in counterpoint to the foghorn-like vocals of a busker yelling his way through 1970s Russian rock. I’d never quite heard anything like it.

• The Inversia festival is held in Murmansk every year. The UK–Russia Year of Music continues until the end of March.

… we’re asking readers, like you, to make a new year contribution in support of the Guardian’s open, independent journalism. This has been a turbulent decade across the world – protest, populism, mass migration and the escalating climate crisis. The Guardian has been in every corner of the globe, reporting with tenacity, rigour and authority on the most critical events of our lifetimes. At a time when factual information is both scarcer and more essential than ever, we believe that each of us deserves access to accurate reporting with integrity at its heart.

You’ve read 203 articles in the last four months. More people than ever before are reading and supporting our journalism, in more than 180 countries around the world. And this is only possible because we made a different choice: to keep our reporting open for all, regardless of where they live or what they can afford to pay.

We have upheld our editorial independence in the face of the disintegration of traditional media – with social platforms giving rise to misinformation, the seemingly unstoppable rise of big tech and independent voices being squashed by commercial ownership. The Guardian’s independence means we can set our own agenda and voice our own opinions. Our journalism is free from commercial and political bias – never influenced by billionaire owners or shareholders. This makes us different. It means we can challenge the powerful without fear and give a voice to those less heard.

None of this would have been attainable without our readers’ generosity – your financial support has meant we can keep investigating, disentangling and interrogating. It has protected our independence, which has never been so critical. We are so grateful.

As we enter a new decade, we need your support so we can keep delivering quality journalism that’s open and independent. And that is here for the long term. Every reader contribution, however big or small, is so valuable.