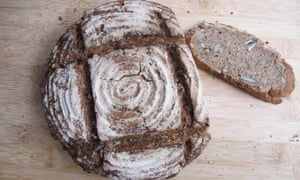 If December is a month of sweetly spiced, buttery breads, January seems to be the time for rye, with its bright, sharp flavour and darkly wholesome good looks. This hardy grass, which grows well at cool, damp latitudes, was once a more common material for bread-making on these islands than the more temperamental wheat. Despite its high protein and fibre content, however, it was always reckoned distinctly inferior in quality both due to its low gluten content – which makes for a heavier, denser loaf – and thanks to ergot, a potentially fatal fungal disease associated with the crop (the last outbreak in Britain struck Manchester’s Jewish population as late as 1927).

Elsewhere in Europe, it never fell from favour. One of the great pleasures of travelling in Scandinavia, Germany and points further east is the array of breads in various dark shades, often generously seeded or speckled with grains, laid out at breakfast. They taste like they’re doing you good, and I mean that in the best way.

While it’s perfectly possible to buy decent rye bread in most supermarkets – shrink-wrapped, sour and crumbly (and infinitely nicer toasted, in my opinion) – it’s a bit more difficult to find the really good kind. Rye has a bit of a reputation as a baking bad boy but, once you know how to treat it, it’s easy to make a full-flavoured, long-lasting loaf that’s as delicious with butter and marmalade as it is with pickled herring and dill.

Many so-called rye breads are actually a mixture of rye and wheat, or some other grain that’s easier to get a rise out of. Signe Johansen uses equal parts rye and white bread flour in the Danish pumpernickel recipe in her book, Scandilicious Baking, while Dane Trine Hahnemann goes for a 2:1 ratio of rye to wheat inScandinavian Baking. Nigel Slater, meanwhile, balances his rye with wholemeal spelt, then adds a quarter as much white bread flour on top. I also try two 100% rye recipes, from Paul Hollywood and the Leiths Baking Bible.

The wheat makes a very visible difference. Put it this way: if I were hoping to break a window, or prop open a heavy door, I wouldn’t choose Slater or Johansen’s loaves, which could almost pass for ordinary – if unusually tasty – wholemeal. The all-rye variants have a noticeably tighter crumb and denser profile, but – importantly in my reckoning – taste more distinctly of rye. You’re never going to get a fluffy, airy result using just rye, but that’s not the point here; you eat it for its flavour.

Rye flour’s lack of gluten means that it needs a lot of help in the raising department to be anything other than a surprisingly nutritious brickbat. It also takes an absolute age to rise: Hollywood and Johansen advocate leaving the dough overnight, while Hahnemann and Leiths both recommend the use of a starter, made with buttermilk and yoghurt respectively, which Hahnemann leaves to sit for three days before adding to the remaining ingredients for yet another overnight rise. Although I’m aware that professionals prefer a colder, slower proof (apparently, it gives a better flavour), the chilly climatic conditions give me cause for concern. Indeed, I have a few disasters along the way (notably one starter I manage to kill off before it even gets going).

Sourdough rye is undoubtedly delicious, especially when paired with smoked or pickled fish, or a creamy butter or cheese, but it is also pretty tangy and, to my mind, a little too strong for everyday use. Rye is not a flour that needs much help in the flavour department and, as I’d like this to be a loaf everyone feels confident enough to try, I’m going to go for a quicker version instead. (Rye aficionados: feel free to recommend rye sourdough recipes below the line.) Quicker, but not quick, mind you – you’re never going to have an all-rye loaf on the table in time for breakfast unless you start it the night before, but patience will be well rewarded in this case.

Johansen mixes her dough with boiling water, explaining that, although this may seem “a peculiar way of making bread … it converts the starch into sugar, giving a sweeter taste and a more complex flavour”. She’s right – it does, helped along by the treacle also deployed by Hollywood and Leiths to balance the natural tanginess of the grain (Slater uses honey).

Slater adds grated parmesan to his bread, Johansen butter. Fat gives the crumb an attractive softness, but Hollywood’s version also has a great texture and, the way I see it, the less fat that goes in, the more can go on top. Caraway is traditional in many Scandinavian and eastern European varieties, but it makes the bread less versatile – brilliant with soft cheese or salmon, less good with marmalade. Feel free to add a couple of teaspoons, though.

Although you could leave the loaf at that, I’d recommend going the whole wholesome hog and adding some grains, nuts or seeds in the interest of textural contrast. Hahnemann goes for cracked rye, Johansen rye flakes and Slater walnuts, all of which work brilliantly. The slight chewiness of the cracked rye is my favourite, and it’s available online, but rye flakes and nuts are considerably easier to source if you’re keen to get going. A sprinkling of seeds would also be delicious.

There’s not much point in extensive kneading, because there’s so little gluten to develop in a rye bread dough. Nevertheless, it’s worth making sure everything is well mixed. Leiths’ small, dense, flavourful loaf is baked in a bain marie, presumably to protect it from the high temperature of the oven, but I don’t find the others suffer from the lack of this. Adding a good splash of boiling water to the oven, as Johansen and Hollywood suggest, to “create steam and help form a good crust”, is wise, though – both have deliciously chewy examples.

As ever with bread, make sure you leave it to cool completely before slicing into it. After that, well, if anyone can beat my record of eight slices standing up at 2am, I’d like to hear about it.

Put the flour and salt in a large bowl and pour over 400ml boiling water. Mix together into a paste, and leave to cool a little.

If using fresh yeast, cream it together with a little of the treacle until liquid, then add to the paste along with the cracked rye and seeds if using. If you’re using fast action yeast, add it as is. Add just enough water to bring it all together into a dough that’s soft, but not too sticky – about 50-75ml should do it.

Lightly grease a work surface and work the dough for about five minutes until it feels smooth and everything is well mixed together.

Lightly flour a bowl or proofing basket. Form the dough into a ball shape by turning it on the work surface while tucking the bottom edge underneath, then put it into the bowl and cover with a damp cloth. Leave somewhere relatively warm, but draught-free, preferably overnight, until roughly 1.5 times the size (it probably won’t double).

Heat the oven to 220C/425F/gas mark 7 and put a roasting tray in the bottom. Boil a kettle. Line a baking tray with parchment paper and turn the dough out on to it so the floured base is on top. Slash with a knife.

Put in the oven, then – working very quickly – half-fill the roasting tin with boiling water. Bake for about 35 minutes until the loaf is well browned on top and the base sounds fairly hollow. Allow to cool on a rack before slicing.

Rye bread: how do you feel about its distinctive flavour and unapologetically heavy texture, and why isn’t it more popular in this country? For fans who have already mastered a basic loaf such as this, which of the many other varieties would you recommend we try?