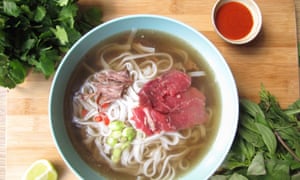 The first thing you need to know about pho is that it doesn’t tend to rhyme with “know”. Most Vietnamese will pronounce it “fuh”, rather like the French word for “fire”, which is unsurprising, since the name is generally thought to come from the pot au feu casserole brought over by the French – prior to their arrival in Vietnam, in 1858, beef was rarely eaten.

The most popular version, made with beef (pho bo) is thus a relatively recent addition to the rich culinary landscape, but a wildly popular one. Though the dish originated in the northern city of Hanoi, these days the whole of Vietnam runs on pho, usually eating it for breakfast, or as a late-night snack.

Consisting of a deeply savoury, warmly spiced beef broth laced with slippery rice noodles and a modest amount of meat – and generally served with handfuls of fresh herbs and a generous squeeze of lime – it’s the perfect warming dish for this time of year (which is the one time I want to spend four hours making broth).

Although it’s much easier to get pho here than it used to be – in the absence of hole-in-the-wall pho vendors on every Vietnamese corner, selling the stuff more cheaply than you could ever hope to make it – the satisfaction of cooking your own is almost as great as the delight of that first steamy slurp. Go on, give it a go next time you’ve got a morning free. You won’t regret it.

Like Japanese ramen, or indeed a Scotch broth, a pho stands or falls on the quality of its base – which, according to J Kenji Lopez-Alt of the US website Serious Eats, is traditionally made by “simmering beef bones and meat along with a few aromatics for around six hours”. Six hours is nothing: Van Tran and Anh Vu write in their Vietnamese Market Cookbook that they cook theirs for more than 72 hours, although, to my relief, the recipe they give is for a quick, after-work version.

No such shortcuts for chef Bobby Chinn, who writes in his book, Vietnamese Food, that “it was not until I came to Hanoi that I learned how to make Vietnamese beef stock”, a lengthy process that apparently involves soaking the bones in cold water overnight before bringing to the boil three times in fresh water, “until most of the impurities are removed”, and then cooking “gently for a long time” to extract the gelatine. The process takes the best part of two days, though I don’t, in all honesty, notice much of a difference in flavour between his version and Vietnamese chef and food writer Uyen Luu’s, which forgoes the initial soaking, and only brings the pan to the boil once. Slow, steady cooking, for at least five hours, seems to be more important – Luu adds yet more savoury flavour by simmering her bones in diluted chicken stock, but, good as this is, it shouldn’t need the help.

Lopez-Alt’s quick version, Tran and Vu, and Olive magazine all rely on ready-made stock instead – beef in the latter two cases; chicken, somewhat surprisingly, in the first, on the basis that “canned beef broths are universally pretty awful”, while “canned chicken broth tastes much more like homemade, and provides a relatively neutral background to build a broth upon”. Though this may be the case in the US, it’s relatively easy to get good-quality, gelatinous beef stock here, so, if you’re in a hurry, go for that instead, and simmer it with aromatics for as long as you’ve got in order to extract the maximum flavour.

If, however, you can only find stock cubes, then you could do worse than follow Lopez-Alt’s advice and chuck in a few ground-up chicken wings and braising cuts of beef to boost its flavour, though I’d advise against the gelatine he also adds. He says it takes the broth “from pretty tasty to sticky, rich, lip-smackingly delicious”; I think it makes it taste of ground-up hooves. And sticky is not a quality I particularly value in my soup.

Better, if you can, to do it yourself. Any good butcher will be able to supply you with bones, many for free, and it’s a satisfying, pretty undemanding task for a chilly day.

Luu, Chinn and Tran and Vu all char their onion and ginger before adding it to their broths, lending it a deep, faintly smoky flavour, enhanced by the black cardamom Luu also uses. Indeed, smoky and sweet seems to be the flavour profile here, with all the recipes using both cinnamon and star anise. I also love the zestiness of Luu’s dried orange peel and coriander, and the faintly mentholated note added by her and Lopez-Alt’s cloves.

The mooli, or white radish, in Luu’s recipe is a puzzle, though – it doesn’t appear to be present in the finished dish, but I’m not sure what part it might play in flavouring the stock, given that it doesn’t have much flavour of its own. Suggestions welcome.

Tran and Vu and Olive resist adding any extra meat to their stock, presumably on the basis that the cooking time is so brief that there’s little chance of extracting any flavour. Instead, they pour the boiling liquid on to sliced steak, marinated, in the former case, in ginger, fish sauce and seasoning.

Cold, rare meat makes a delicious contrast with the hot broth, but I’m more taken with the tougher, more gelatinous cuts Luu and Chinn gently simmer along with the bones, until they almost fall apart, which feel more reminiscent of the tendon soups served in Vietnam. However, if you’d like to push the boat out, use both. Oxtail seems to give the best return in terms of flavour and body, though shin makes a good substitute; Chinn’s brisket, though it does the job, tastes dry and boring in comparison. (Tendon is available from oriental specialists, but I’ve yet to find any to match the quality of the meat from my butcher. If you can, feel free to add it. The same goes for tripe, which I’ve never learned to love.)

Fish sauce is a popular way of giving the stock some extra savoury oomph – and it’s easier to get hold of than Luu’s pork-flavouring stock granules and pho stock cubes. A little sugar balances it out; preferably the rock variety if you have it, although ordinary white is fine, too.

Apart from the obligatory rice noodles (which should be pre-cooked until just chewy, lest the hot broth tip them over the edge into mush), the pho aficionado has a world of choice when it comes to garnishes. Given the rich, savoury flavour of the base, rather than the mimsy little sprigs favoured on western soups, I’m a fan of anything sharp and fresh – spring onions, lime juice, bird’s eye chillies, plus great generous handfuls of coriander and Thai basil (the rarer sawtooth herb has never done much for me, so I can’t in all conscience send you to hunt it down unless you’re already a fan).

Beansprouts are also popular, though I can’t abide the things. I can see how the crunch might be pleasant, though, so I’ve included them; personally I prefer to chuck whatever other fresh vegetable is lurking in the fridge instead but, as I never caught so much as a whiff of a brussels sprout in Vietnam, this is between you and your authenticity god.

As accompaniments, you’ll find hoi sin and chilli sauce on just about every cafe table in Vietnam, and Luu’s chilli oil and extra fish sauce wouldn’t go amiss either. But, before you add any of them, please take a moment to appreciate the complex flavours of your lovingly constructed broth – you may well find it doesn’t need anything else to warm your cockles.

Put the bones and oxtail in a very large pan and cover with cold water. Bring to the boil and then boil for about 10-15 minutes, until scum rises to the surface. Drain, discarding the water, rinse the bones and meat well, and clean the pan.

Meanwhile, char the onion and ginger on a rack set over the hob, or using a blow torch, or (and only if neither of these things are available) the grill or a hot griddle pan, until well blackened, which should take about 15 minutes. Peel off the skin as far as possible.

Put the bones and meat back in the pan and cover with three litres of cold water, or as much as you can fit in. Add the onion and ginger, the spices and orange peel (preferably in a muslin pouch or similar to make life easier later) and bring to the boil. Then turn down the heat and simmer gently for at least five hours, skimming as necessary, until the oxtail is falling off the bone. Strain, retaining the oxtail and, if you have time, cool the broth and skim the fat from the top if desired. You should have about two litres.

Add the fish sauce, sugar, salt and black pepper to the broth to taste, and pick the meat from the oxtail.

Cook the noodles according to the packet instructions and divide between four bowls. Pour the hot broth over the noodles and scatter with spring onion, a little chilli and the bean sprouts, if using, then lay the picked oxtail and sliced raw meat, if using, on top. Serve with the limes and remaining chilli on the side along with the herbs and condiments.

Pho – friend or foe? And is it worth the trouble of making at home? Which other meals in a bowl are in your winter repertoire?