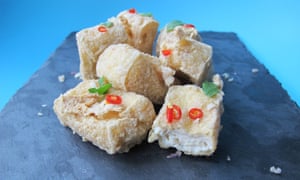 Before you all start spluttering that tofu is a “beige blubber” with the “texture and disposition of a particularly upbeat sponge” (tip of the hat to Nigel Slater and the New York Times respectively), please bear with me. I, too, once believed tofu to be an utterly pointless waste of protein – after all, one of its biggest selling points is its almost complete absence of flavour, while the consistency, which can vary from chewy loofah to slimy mush, could be politely described as challenging to many western palates.

But then, several years ago, I adopted a vegan diet for Lent, forcing me out of my comfort zone and into the welcoming arms of a pock-marked old woman and her fearsomely spicy bean curd. And, finally, I got it – the bland creaminess of the gently wobbling cubes of tofu was the perfect contrast to the salty, fiery sauce. In fact, it works in much the same way as paneer: a neutral protein source for the non-meat eater.

That said, though the soft, almost custardy texture of that tofu continued to draw me even after I’d gone back to bacon, I found it harder to warm to the tough, soggy fried stuff often found in stir fries – which is why, when a waitress recommended some crispy tofu with lemongrass and chilli in a suburban Saigon restaurant, I was sceptical. When she later asked if we wanted dessert, we ordered a second round of tofu instead. That’s how good it was.

Yet my attempts to recreate this glorious dish at home, with its crisp crust and silky interior always ended in disaster and, more often than not, a tofu scramblerather than the stir fry base I was hoping for. Turns out tofu’s not just a difficult thing to love; it’s a difficult thing to cook – but I beg even sceptics give this recipe a try just once. You might well be surprised.

To add to its accessibility problems, tofu comes in a number of varieties, which, confusingly are sold under an even larger variety of names. As I understand it, the two principal kinds are silken and firm. Silken, which has been neither drained nor pressed, has the highest water content and the softest texture, reminiscent to this omnivore of a baked egg custard. Firm tofu, meanwhile, has been pressed to extract the moisture – how hard is indicated on the packet. Those labelled as “firm” or “extra-firm” are generally the best when it comes to developing a golden crust.

Though I love the smoothness of silken tofu, after trying Luke Nguyen’s recipe for crisp silken tofu crusted in lemongrass in The Food of Vietnam, I have to concede that the delicate texture is a nightmare for the amateur cook – however careful you are when turning it, it persists in falling apart in the pan. Extra-firm tofu seems a far safer option, and the consistency is probably a better bet for stir fries in any case.

Nguyen simply drains the tofu before use, but most recipes recommend at least one further step in order to keep it together, and help it to crisp in the pan: as J Kenji López-Alt of the website Serious Eats explains, “The key to both crispness and browning is the removal of moisture, so the drier you get your tofu to begin with, the more efficiently these reactions will take place, and the better the contrast between crisp exterior and moist, tender interior will be.”

He and Alice Hart, writing in her forthcoming book, The New Vegetarian (out in March), recommend wrapping in kitchen roll and pressing it down with something heavy for a few minutes. Andrea Nugyen, author of Asian Tofu, douses it with boiling salted water, while Van Tran and Ahn Vu, in Vietnamese Market Cookbook,boil it with salt and vinegar (to “revive the tofu and clean it of any sourness”) before patting it dry. Vegan food writer Rhea Parsons recommends freezing the tofu before pressing “to make it even more firm and with a chewier texture” and Dana Shultz, of the blog Minimalist Baker, suggests baking it for 25 minutes before sautéing (“a little trick I picked up at a vegetarian cafe in San Antonio”).

Pressing seems to work just fine – especially if you follow López-Alt’s sensible suggestion of slicing it first, to increase the surface area. Freezing does make it firmer and easier to cut (though I don’t find this a problem with the extra-firm stuff), but the real surprise is the boiling. This may seem counterintuitive when trying to remove as much moisture as possible, but it does indeed give a crisper crust after frying – possibly by the process of osmosis, although the more scientifically minded among you may be able to say for sure.

What boiling also does is lightly season the tofu, which may or may not be desirable depending on what you’re planning to do with it. I happen to think it’s a bonus, and certainly more effective than marinating the stuff, as Dana suggests – I take my eye off the pan for a minute to answer the door, and return to a kitchen full of smoke to find her (delicious) peanut butter and soy sauce dressing has formed an acrid crust on the outside. Adding dry spices is equally problematic – I struggle to crisp Hart’s tofu without burning the five spice and chilli rub, and the same goes for Luke Nguyen’s chilli and garlic. Best, I think, to leave any flavouring until after cooking, though if you really really want to do so, Tran and Vu’s trick of cutting slits in the cubes and pushing slivers of lemongrass and chilli into them proves the most satisfactory method.

Again, the benefits of coating depend on your plans for the tofu; López-Alt’s cornflour-and-vodka batter delivers a thin, crisp crust, while Parsons’ battered and cornflake-coated nuggets are completely, ridiculously crunchy and delicious, and pretty unbeatable if you’re planning to eat the tofu on its own. But it’s also possible, as Tran and Vu prove, to achieve crispness without any additional ingredients – just hot oil, which seems to me to be the best option for stir-fries.

Baking produces a dry, but not overly crisp result, and both pan- and shallow-frying require a lot of faffing about with a thin spatula, whereas deep-frying produces consistently crisp, gorgeous results. I take comfort from the fact that, according to Harold McGee, deep-frying often adds less fat to food than pan frying it, because the high temperatures force the moisture to the surface to form a barrier the oil cannot penetrate.

It is, however, vital to blot the tofu as soon as it comes out of the pan, because as the temperature of the food cools, the rate of oil absorption increases. Then all there is to do is season (or add to a stir fry at the last minute, so it doesn’t go soggy) and scoff as fast as you can – after all, you wouldn’t want anyone to see you eating tofu.

Bring a medium pan of water to the boil, and salt generously until it tastes like the sea. Meanwhile, cut the tofu into chunks about 3cm square. Add to the water, take off the heat and leave to sit for 15 minutes. Meanwhile, line a baking tray with kitchen paper or a clean tea towel.

Scoop the tofu out on to the baking tray and top with more paper or another towel. Add another baking tray or chopping board, and weight down with a couple of tins. Leave to sit for 15 minutes.

Fill a deep pan a third full of oil, and heat to about 180C, or until bubbles form around a wooden chopstick.

While the oil is heating, blot the tofu as dry as possible with fresh towels. Drop into the oil, stir once and cook until crisp and golden, then scoop out and drain on kitchen towel. Season and sprinkle with the lemongrass and chilli if using, or add to a stir-fry at the last minute.

Tofu: love it or hate it? And if the latter, would you consider giving it another go? What other dishes would you recommend to this recent convert, and is it worth making your own?