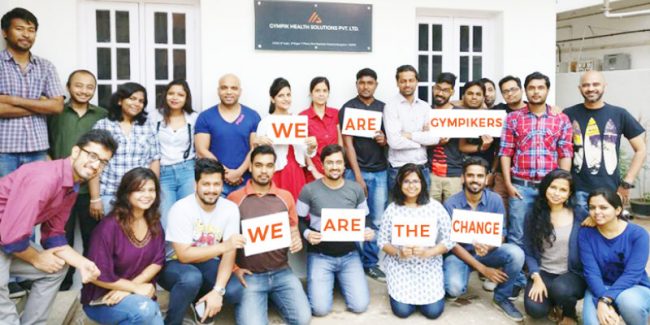 With the fitness industry in India riding high on growth, Bengaluru-based Gympik, a health and fitness aggregator, is taking fitness to Tier II and III cities

India has woken up to fitness in a big way. The open-air gyms at public parks, multiple yoga sessions at schools and colleges, rise in the sale of fitness bands and growing popularity of Zumba and Tabata stand testimony to this. The young, the old and those in between have realised that fitness isn’t a fad; it’s a way of life.

If you thought this is true only in Tier 1 cities, think again. Smaller cities are catching up.

Gympik, a fitness discovery platform, says that 33 per cent of their visitors are from Tier II cities – a figure that was single digit in 2015.

Gympik is a health and fitness aggregator that rounds up the best gyms, yoga classes, aerobics centres, Zumba classes, personal trainers, yoga instructors and dietitians in the city.

Amaresh Ojha, the founder of GymPik, says, “Earlier, these services were exclusive to Tier 1 cities because of the technology-friendly crowd and easy scalability of our businesses. But the demand has compelled us to expand into Tier 2 and 3 cities. If we look at cities like Chandigarh, Ahmedabad or Indore, the density has increased manifold. We are now focusing on other cities like Patna, Visakhapatnam and the like.”

Amaresh, an engineer, holds a MBA degree from IIM-B. He has worked with tech companies like Cisco and Bluestone, but took to fitness when he realised that he always found the hunt for the right fitness centre tough since the time he was in college.

This Rs 100 crore venture has clocked in Rs 4 crore revenue in the current year.

We increased profits by 200 per cent from the past year and expect to break even by the middle of next year, says the founder.

Amaresh and his team believe that they have surpassed the age of just listing fitness centres. They now have over 6,000 trainers along with 12,000 fitness centres working with them.

Not so long ago, Gympik was called the “Zomato” of the fitness industry.

Amaresh says, “We used to call ourselves the Zomato but that’s not the case today. We have come a long way from just listing to wellness. That’s why we would like to be called the ‘Practo’ for fitness. Practo has a better resemblance to our model now.”

Gympik works as a curated market space where they benchmark their suppliers using a team of experts and work with tough standards. They track progress regularly and continue to face challenges at every stage.

“The biggest challenge I face is the mindset of the people. We, as a nation, are culturally trained to take care of other’s health and not our own. But, the vision of a healthy country is growing stronger by every passing day,” Amaresh says. He adds that his focus is not on growth only in terms of numbers; he wants to build a strong eco-system.

The team at Gympik recently conducted a survey and found that 60 per cent Indians spend less than Rs 500 a month on fitness.

Amaresh realises that people are price sensitive even when it comes to fitness.

“We have developed app-based training where the users can work on their fitness in the comfort of their home. For this, we offer videos and suggestion blogs,” he says.

An eye on corporates

Not long ago, Gympik acquired Fitness Papa and Oyo Fit to increase their footprint in the corporate wellness category. They also raised an undisclosed amount in the pre-series A funding in 2016 from round glass partners.

“Our acquisitions of Fitness Papa and Oyo Fit are going strong. Because both players were of ‘per-class model’ meaning if one is subscribing to us, he can use any of the services like Zumba, gym or even yoga class. Small teams of both firms are still with us,” Amaresh says.

Gympik’s prime focus has always been a corporate clientele. Apart from the bulk subscription, a burgeoning was felt due to the deteriorating health among employees working in closed offices.

Amaresh says, “We have a Minimum Price Guarantee Scheme where we provide them with the best of services at the lowest price possible. We also offer personal training, where we exclusively focus on clients. The third one is the class membership, similar to a daily fitness pass, for which we have created a unique, hassle-free dashboard.”

The company claims to have tied up with over 25 corporates, including Sapiens, True Wealth and Apollo Jiyo.

Gympik works as two verticals for the suppliers and end users, similar to Uber, (a cab aggregator). It generates leads for their B2B suppliers and manages their micro website and the entire digital space. The company has recently developed a SaaS Product for suppliers, which retails at Rs 5,000 a month.

Amaresh says, “We have already sold it to 35 centres with two months of the launch and plan to reach the 500 mark by this year-end. It is very industry focused. It tracks the trainer’s database along with that of the user and also assesses the trainer’s performance. Our country is struggling with trainer attrition, we are trying to mechanise the process and keep tracks of good trainers for further development.”

For all those who consider fitness a serious concept, Gympik runs a unique awareness programme called Soul-o-Fit. It is usually organised at any happening spot in the city, be it a pub and club. The last Soul-o-Fit event registered a footfall of over 900 people, of which 35 per cent later opted for fitness activities.

Amaresh says, “This is to help break the stigma around fitness and build a network. We just replace the alcohol and junk with health drinks and yummy food.” The next Soul-o-Fit will be held in Delhi, followed by Mumbai.

There’s a lot happening in the fitness market across the world. Globally, Classpass and KFit have been leading for quite some time. New York-based Classpass claims to have processed over three million workout requests so far and has garnered $84 million in investments across several rounds. Most Indian aggregators like Gympik and Fitpass follow the Classpass model.