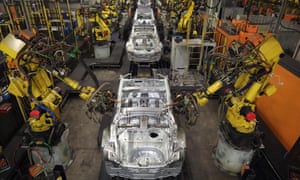 A robotic production line at Nissan’s Sunderland car plant. ‘With labour cheap and plentiful, too many employers see no reason to invest.’ Photograph: Christopher Furlong/Getty Images

No developed country has been immune to the slowdown in productivity growth since the financial crisis, but Britain has been particularly hard hit. Instead of productivity rising by around 2% a year, as was customary before 2007, more workers have been employed to produce virtually the same output.

International comparisons show that the US, Germany and France are at least 20% more productive than the UK, and the gaps show no sign of closing after a lost decade that has left productivity 15% below where it would have been had the pre-2007 trend continued. Put another way, the economy would be in the region of £250bn bigger – and living standards markedly higher – had productivity growth not collapsed.

In 2008 or 2009, when the economy was suffering its worst recession of the postwar era, poor productivity could be seen as a price worth paying. At the time, there were justifiable fears that unemployment was on course to match the 3 million-plus levels of the early 1980s and early 1990s, but the willingness of employees to accept pay freezes and pay cuts meant there were far fewer redundancies than might have been expected. Employers kept workers on rather than laying them off.

This explanation no longer stands up to serious scrutiny. The economy has been growing, if at times falteringly, for more than seven years, and there should have been a sustained productivity improvement by now. That there hasn’t been one shows a dark side to record employment levels: too many of the jobs being created are low-wage and low-skill.

Solving the “productivity puzzle” has become a priority for policymakers, and rightly so. Ministers know that there will be no hiding place in the post-Brexit economy, and from Theresa May downwards there is a search for solutions.

Britain certainly has companies that are highly productive. What’s more, as Andy Haldane, the Bank of England’s chief economist, noted recently, they can be found in every sector and in every region. The problem is that for every “frontier” firm there are two or three laggards dragging down the average. Around 1% of companies have seen productivity growth of approximately 6% a year – but one-third have seen no increase since 2000. Many of these firms would have gone out of business, so the theory goes, had interest rates not been kept so low for so long.

The problem with a good blast of “creative destruction” is that there is a lot of pain for not much gain: Mr Haldane estimated that interest rates at 4.25% rather than 0.25% would have meant 10% more companies going bust, a 1-2% improvement in productivity and the loss of 1.5m jobs. That’s a high price to pay, especially since not all the bankruptcies would be zombie companies.

A better approach would be to tackle productivity from both ends: raising the level of demand to ensure that workers are kept busy while at the same time addressing the economy’s long-standing structural deficiencies, of which the most glaring is a lack of investment. Productivity goes up when employees have access to the latest kit and the skills to use it effectively. But, with labour cheap and plentiful, too many employers see no reason to invest. It is this ingrained tendency that best makes the case for a national investment bank: if the private sector won’t rise to the challenge, the state should step into the breach.