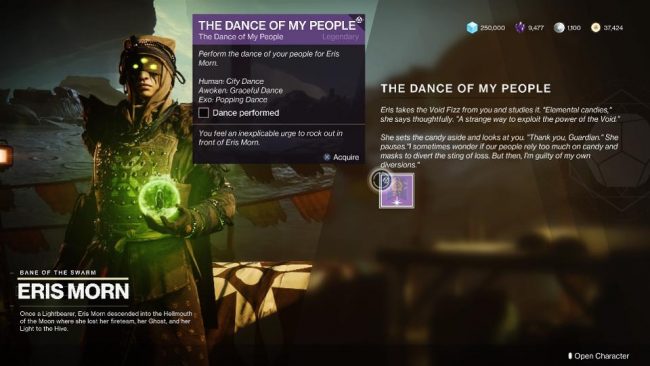 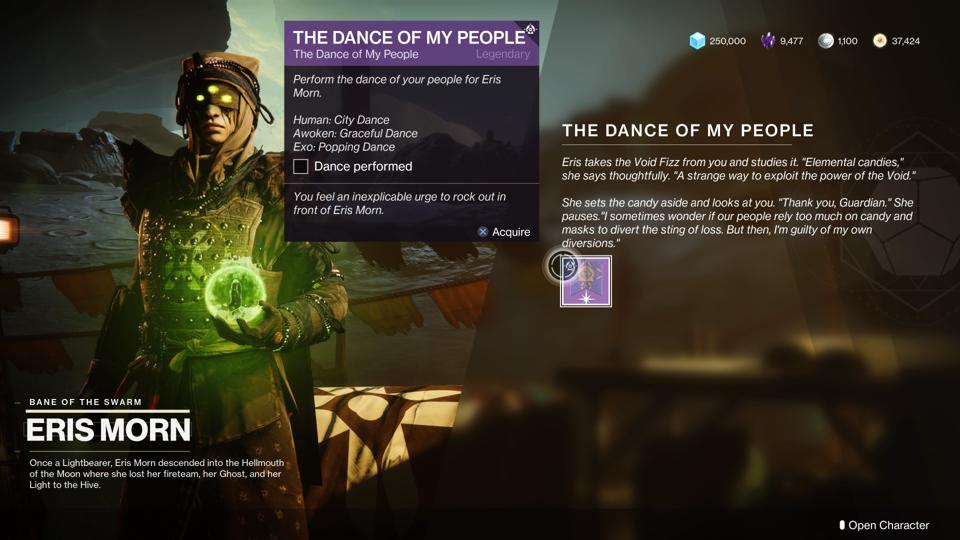 I am not doing a whole lot in Destiny 2 at the moment, just finishing up a few loose ends here and there as I wait for the final Vex assault in two weeks or so. But I was buying some cores from Spider and stumbled upon a quest in Festival of the Lost I didn’t know existed.

I know that many people do know about this quest, and finishing it is actually an achievement for the event, but if you’re like me you may have missed it, and you really shouldn’t, as it’s…actually rather cute and touching.

This is not a “quest” quest, with a secret campaign mission or gear rewards. Rather, it’s just a fun little aside that ends up with a few neat character moments.

You start the quest by going to Eris and getting her traditional box of raisins for the event. I did this when the Festival started, but I didn’t think much of it. But it turns out this turns into a sort of swap meet where you need to take that candy to someone (Spider) which sets off a chain reaction that will give you a candy and mini-quest in each patrol zone.

The mini-quests are not hard. They’re things like kill 12 Fallen/Hive/Cabal/Scorn in the Tangled Shore or get 5/5/10 grenade/melee/super kills in the Dreaming City. The “longest” step was probably killing enemies for Sloane in the Archology on Titan, but even that wasn’t more than ten minutes.

A Quiet And Emissions-Free Transport Of The Future

More Than What’s On Paper: Dedication Has Its Rewards

You will get some coins here and there for your trouble, and in the end you will get a unique Festival shader that I don’t believe comes from anywhere else. But the real treat is the journey and the little character moments contained therein.

None of the planetary characters actually speak to you with voicework, but they do have written lines that are pretty good. Devrim talks about his husband writing him letters. Petra talks about how the Awoken don’t celebrate the Festival but it’s nice to be included.

But the payoff comes when you return to Eris with the final candy as she does have actual lines for this quest. (micro-spoilers follow).

Eris talks about how she feels bad about how she acted in the past regarding the Festival because she felt like everyone was mocking her and her dead fireteam, “celebrating” death with candy and stupid masks. But over time, she’s now realized that the best way to honor the dead is to live life as best you can, and now she understands why people celebrate.

When you pair this with the ongoing quest to help Eris mourn her dead fireteam by retrieving their mementos, it’s actually quite moving, and really shows some actual character growth on this part, something that Destiny isn’t exactly known for. I don’t know if the coins and shader and triumph were worth it, but this moment definitely was.

Don’t miss this quest before the event ends. It only takes a little while and I think it’s one of the better character moments of Destiny 2 so far, oddly enough. Enjoy.