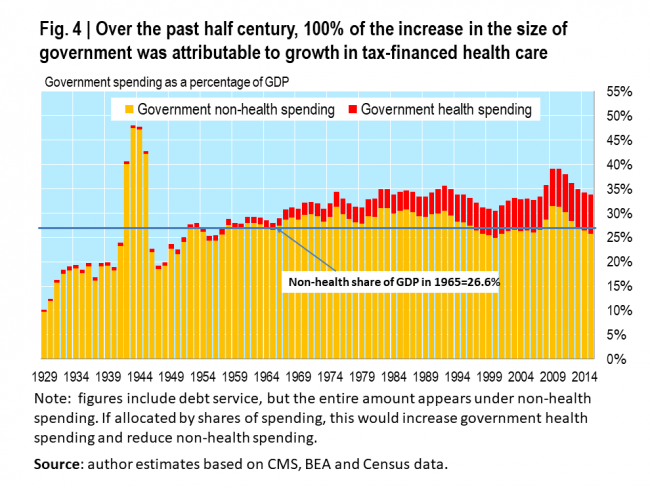 In Part 1, we learned that real per capita health spending saw a 25-fold increase the 8 decades starting in 1929 even as real per capita GDP grew only 5-fold during the same period.

In Part 2, we learned that annual excess growth in inflation-adjusted health spending above and beyond general economic growth has been a persistent phenomenon: from 1929 to 2015, the average rate of growth in real per capita health spending (4.1%) was slightly more than double the rate experienced in the rest of the economy (2%).

In Part 3, we learned that by 2025, health spending will make up more than 30 percent of all federal spending.

Today we will examine the astonishing growth in the health share of government spending in more detail. Specifically, we will look at how much of the seemingly inexorable rise in government’s share of GDP can be attributed to growth in tax-financed health care.

Over the past half century, 100% of the increase in the size of government was attributable to growth in tax-financed health care. 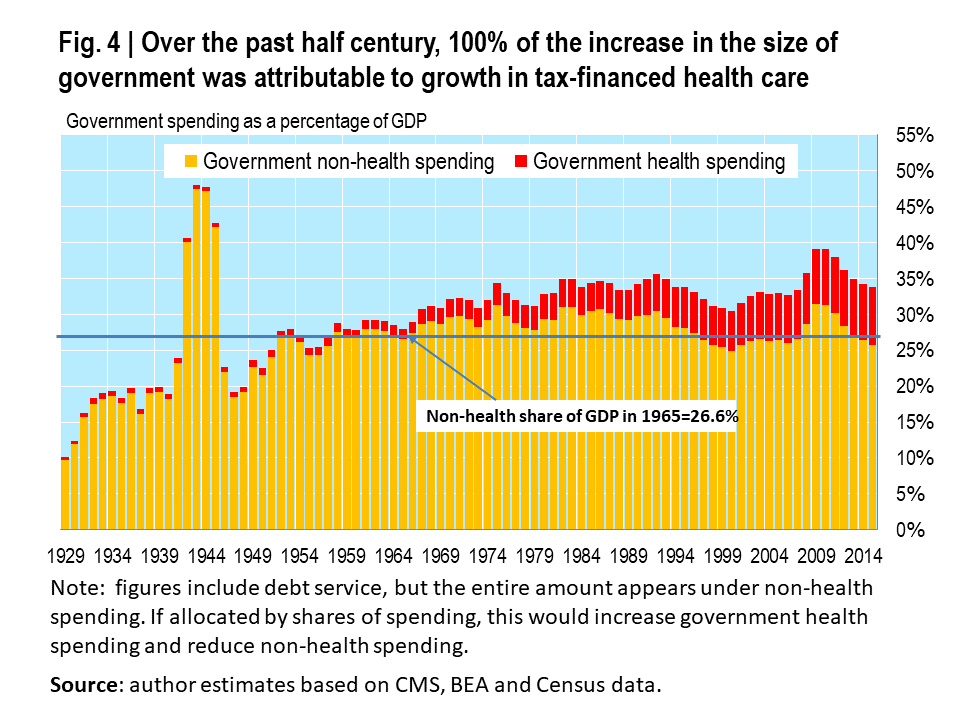 Consider the federal government. In 1965, all federal government spending accounted for 18.4% of GDP, with federally-financed health spending accounting for a puny 0.6% of GDP. In short, prior to the adoption of Medicare and Medicaid, health spending only accounted for $1 of every $30 spent by Uncle Sam.  By 2015, federal spending had climbed to  22.4% of GDP, but federal health spending had grown nearly 10-fold as a share of GDP to 5.9%. This meant that for every $1 Uncle Sam spent on health care, less than $3 was being spent on everything else–a rather stark change from one half century earlier.

In short, 133% of the increase in the size of the federal government (measured as a percentage of GDP) was the result of an explosion in federal health spending driven by 3 large entitlements: Medicare, Medicaid and the ACA.  This illustrates why however politically unpalatable, Congress cannot duck for long the triple dilemma of how to reform these entitlements.

A similar, albeit less dramatic story, underlies health spending by state and local governments. An important reason for the difference is that especially as a result of the enhanced Medicaid matching available under the ACA (which I lamented in an earlier 3-part series), Uncle Sam is bearing a growing share of the tax-financed burden of health spending.

Government Spending is Higher Than it Appears

Some readers may recall from Part 3 that my figures leave out 2 important components of tax-financed health spending: the amounts that governments at all levels spend on health benefits for government employees and their dependents and the hundreds of billions of dollars in annual tax expenditures related to the tax exclusion and similar health-related tax benefits such as the medical expense deduction.

I demonstrated that due to these 2 important omissions, my federal health spending figures for the current year are understated by 30% while those for state and local governments likely are understated by 56%. This means that Fig. 4 represents extremely conservative estimate of the true impact of health care on government spending.

In the next installment we’ll look at the gains in life expectancy that have resulted from the massive amounts of Americans have spent on health over the past 8+ decades. This will allow us to begin assessing whether we are getting good value for the money in the American health economy.

READ CHRIS’ BOOK, The American Health Economy Illustrated (AEI Press, 2012), available at Amazon and other major retailers or as a pdf at AEI. With generous support from the National Research Initiative at the American Enterprise Institute, an online version complete with downloadable Powerpoint slides and companion spreadsheets has been made available through the Medical Industry Institute’s Open Education Hub at the University of Minnesota.