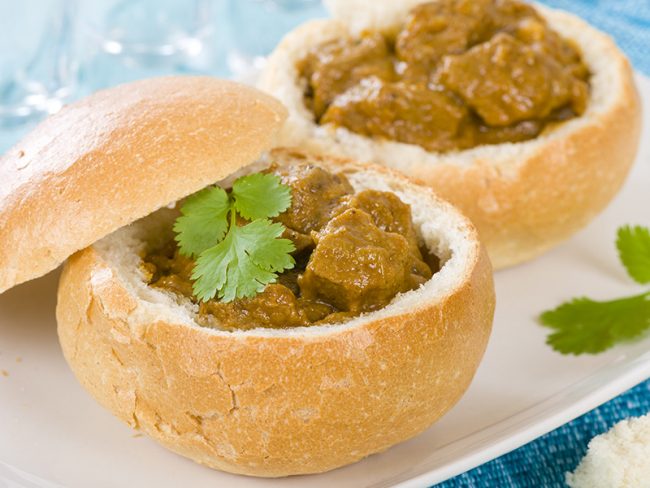 If you really want to see a live example of the saying ‘’Sharing is Caring’’, then you should try Bunny Chow. Often referred to as a bunny, it is the most iconic Durban (South Africa), street food that is at heart a communal, working-class dish and is meant to be shared with another person. It is basically a hollowed out loaf of bread, which is filled with curry. It is believed that the root of this dish is strongly entrenched in India. The story goes that many Indian labourers shifted to Durban in 1940’s to work on sugarcane farming and it was the time they invented Bunny Chow, as they were missing the authentic Indian curry. It was easy-to-carry, filling and affordable too. However, according to food critics and experts, sharing a bunny is also an esoteric art and has some unsaid rules and manners that you really need to know before you share the trend that has recently made waves in UK, US, and India to an extent. Interestingly, while sharing a Bunny Chow, you are meant to eat it with hands and not cutlery. This not only makes it easy to eat the bun but also helps in relishing the taste of gravy made with slow-cooking method. Not only this, you need to be extra careful while sharing the plate, because there are chances that your fingers and the fingers of your co-diner accidentally touch and that could be totally awkward, because according to an ancient Sanskrit Law ‘Finger Touching’’ during the meal is a sign of obligation to marry the concerned person. It is funny, we know.

2. What so special about the curry? This curry will surely remind you of homemade chicken or mutton curry that use raw Indian spices along with exotic sauces. Initially, the dish was available in non-vegetarian platter only, but now, it can be relished by vegetarians too and has the goodness of red kidney beans and thick tomato puree. Interestingly, with Bunny Chow, everything is edible (even the spoon made of potato starch). In this dish, the loaf of bread is hollowed out and then the curry is ladled over. Then, the hollowed part is placed over the curry. After a tiring day, all you need is a simple yet filling plate of food with least complexities. Bunny Chow as the new introduction to the one-pot-meal culture is warm and comforting; majorly for the working class.

5. What makes it popular? It is more like going back to your roots. Originally, considered as a dish of the working class, it has suddenly seen a lot of limelight, all thanks to the fancy plating at all these bar and kitchen spaces. Also, the authentic curry reminds of the homemade gravy that every Indian can easily relate to.

6. Revival of the culture of eating with hands It also goes without saying that a Bunny Chow – whether shared or solo – must always be eaten with your hands and not with cutlery. We agree it’s little messy, but immeasurably more effective in breaking down the bunny and relishing the flavours.
[“source=timesofindia”]