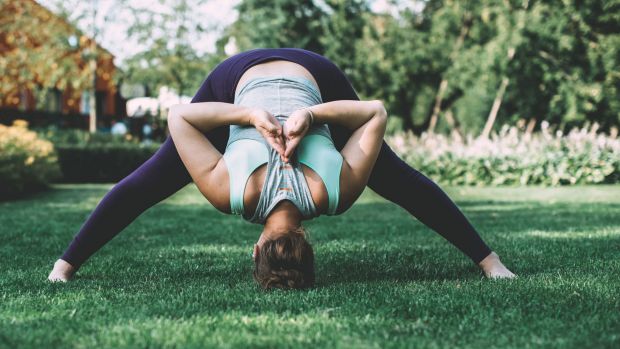 People in Rhode Island staged a protest against a letter to a local paper where a man criticised women who wear yoga pants outside the gym.

At first I thought this must be a suburban thing. In New York, I didn’t know anyone who left the house in gym clothes, unless he or she was actually going to the gym. In fact, I once had a roommate who was the director of a fancy children’s gymnasium down the street from our apartment in Brooklyn. She would get fully dressed each morning, including hair, makeup, and heels, just to walk the 10 blocks to work and then get undressed again. I loved her for this. I loved all of New York for this – for always putting in a little extra effort, for never taking the easy way out. In New York, after all, 10 million people are always looking.

But yoga pants aren’t just a suburban trend. Athleisure is the name given to a class of street clothes that adopt the look and comfort of gym wear but are not designed for any actual sweating. It’s been a trend on the runways and in retail over the past few years, with forecasters predicting it to be one of the biggest sellers this holiday season. And I’m against it.

Lululemon, the activewear company, is the fairy godmother of athleisure. Though the company might be best known for its ubiquitous black yoga pants, founders Chip and Shannon Wilson acknowledge that they always intended to make garments so flattering and stylish that women would want to wear them all day. The Wilsons take full credit for the current yoga pant craze: “I walk down the street, and I see women in their tights and their running shoes and a jacket, and I think, ‘We started that!’ ” Shannon Wilson said in an interview.

Why have black leggings become the uniform of my generation? At least part of the appeal is our increasing interest in everything high-tech. As our lives become more fast-paced, we seem to want everything sleeker, smaller, smarter and more efficient – in a word, easier. This includes our clothing. Jeans used to be the American woman’s most versatile wardrobe staple, but, as Nike chief executive Mark Parker recently announced, “leggings are the new denim,” giving credence to the otherwise ridiculous sci-fi hypothesis, embraced by Hollywood costume designers since the 1950s, that the humans will someday uniformly dress in slick, Lycra unitards. Welcome to the future.

As someone who cares about fashion, I vote for jeans over yoga pants (or Lycra unitards) any day, but my stance isn’t just about aesthetics. It’s about manners.

There is a photograph I love of my grandmother and her family at the 1948 Macy’s Day Parade in New York City. She’s dressed smartly for November weather in a black wool coat and a hazel circle skirt. With her red lipstick and hair set in waves, she looks comfortable but elegant. Her sons, holding balloons, are dressed casually but appropriately in navy pea coats and argyle sweaters. There’s a simplicity and a dignity to the image that speaks to the core values of my grandparents’ generation. Getting dressed wasn’t about vanity (or, rather, it wasn’t just about vanity); it was good manners.

What we wear sends a message to the world. An Hermes handbag makes a statement about wealth and luxury. A pair of four-inch Louboutin heels makes a statement about sex and power. Yoga pants make a statement about comfort and modernity. When we board a flight or run to the grocery store swaddled in cotton-lycra, we are saying to the people around us that our own comfort is our first priority. We are expressing a new kind of modern vanity where dressing down, rather than dressing up, is the power move.

And I confess, I’m just as guilty of wearing yoga pants as anyone else. There have been plenty of occasions since I moved back to the suburbs that I’ve thrown on a pair of black leggings and gone about my day. Recently, I wore yoga pants and sneakers to tutor a student I regularly work with. He is from China, a single father raising a son while studying for a master’s degree in a second language. He comes to see me for tutoring twice a week because, though he is bright and he understands the concepts he studies, articulating his ideas in written English is a struggle for him. He has to work even harder than his classmates to complete his assignments. He took notice of my outfit.

“You look comfortable today!” he said to me.

He was right: I was comfortable. I also wished immediately that I was wearing real clothes. It felt disrespectful – elitist, even – to approach our tutoring session with my own comfort so obviously on display.

The moment shook me up. When did I stop bothering to get dressed every day, I wondered? I lived in New York, where everything is hard, for almost a decade; at what point did I start buying into the idea that easier and more comfortable necessarily means better?

And that’s when I realised that my gripe with yoga pants goes beyond bad manners. Like many pet peeves, this one is rooted in a private fear: I’m afraid of getting too comfortable.

Part of the reason I love the way New Yorkers dress is that I see it as a metaphor for everything else I loved about the city – the work ethic, the energy, the specific kind of community that comes from collective ambition. Maybe it’s precisely because I love those elements of city life that I am wary of the seductive promise of suburban comfort: Why walk when I can drive? Why go shopping when I can order online? Why go out at all when I can lie on my giant couch and watch my giant TV? Why even get dressed today?

Without the external energy of the city urging me on every day, will I find my own internal reasons to keep working harder than I strictly have to? Or will I soften, get lazy? Will I spend the rest of my life going about my day in comfort, coming home in the evening to nurse a bottle of wine until it’s time to go to bed on the quiet second story of my house, only to wake up and do it all again, wearing the same black yoga pants as the day before?

It’s possible that I will. But one way I know to fight that fate: Get dressed each morning.