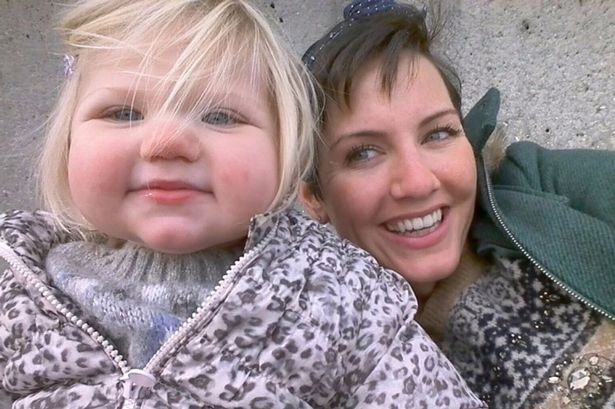 by Taboola
Sponsored Links
Kid-Friendly, Convenient And Fun – Is This Asia’s Most Family Friendly City? (DiscoverHongKong.com)
15 Most Beautiful Women In The World (Crazy Freelancer)

A young mum who tried to raise £60,000 for potentially lifesaving cancer treatment abroad has tragically died just £5,000 short of her target.

Mum-of-one Kim Jenkins , 33, with her friends had family, had been raising cash to pay for therapy currently not available in the UK – but available in Germany.

She had exhausted all other treatments in the UK after being diagnosed with a rare and aggressive form of breast cancer when her daughter Miya was just three-months-old.

Sadly Kim cruelly lost her battle at home late last night – and her death was announced by her family this morning.

Her heartbroken partner Tom – father to two-year-old Miya – said this morning: “I am a broken man and have lost half of my existence.

“I feel her close to me all of the time, but it’s hard being in love with someone that is behind the reflective fabric of life.”

The couple had postponed their wedding last summer as the cancer took its grip.

Paying tribute to everyone who had supported them, Tom said they had “fought like a battalion of thousands” – and he added that the money raised so far will mean that he and Miya won’t lose their house “anytime soon”.

Kim, from Christow in Devon, had last travelled to Germany on November 26 to receive her third course of the treatment – and she was said to have been responding well to the therapy.

She is understood to have returned to the UK where her condition then deteriorated.

The Exeter Express and Echo reports that Tom said this morning: “I am sad to break the news to you that we lost our wonderful Kim last night.

“It was peaceful and she was in no pain.

“She had the full support of me and her parents through her difficult transition and journey to the other side.

“It is a shock to hear this news after things appeared to be going so well.

“Where local hyperthermia treatments were applied which reached the required temperature it appeared to stop the progression in its tracks very quickly.

“However in retrospect, during the whole body treatments they failed to get her to the therapeutic temperature range, and it was lower on each visit.

“Although I was a little concerned about this, only five weeks ago her liver and brain scans were completely clear when we left Germany.

“So within that amount of weeks it came out of the shadows and consumed her.

“I rapidly arranged another two treatments in London to combat the spread, but it all happened so fast and over the holiday week that we could not do anything as she was not fit to travel and most medical consultants were away.

“The truth is she had hope and a powerful treatment plan all the way to the end, everyone behind her fought like a battalion of thousands.

“There was no white flag offered from our side, she passed with great honour.

“The remaining funds mean Miya and I won’t lose the house anytime soon, this should allow me time to work on being able to support the both of us and keep our home.

Kim was diagnosed with triple negative breast cancer when her daughter was just three months old.

It has no targeted or continual therapies and a high rate of reoccurrence.

She was treated with 12 weeks of chemotherapy followed by a double mastectomy and reconstructive surgery.

The family were able to get their life back on track and Kim returned to her job as a care worker.

She and Tom were planning to get married in August last year, but they were forced to put the wedding on hold after she found a lump under her armpit and underwent further treatment.

She was in the hands of Dr Herzog, who runs a clinic at Bad Salzhausen, Germany, and is regarded as the pioneer at treating Kim’s type of disease.

Kim had been recommended six rounds of treatment, just like regular cancer treatment, with a gap of a month between each cycle.

To reduce the costs of staying in Germany, the family received top-up doses of chemotherapy back home.