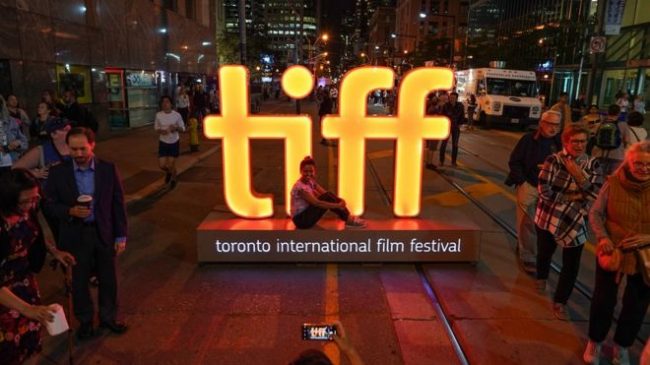 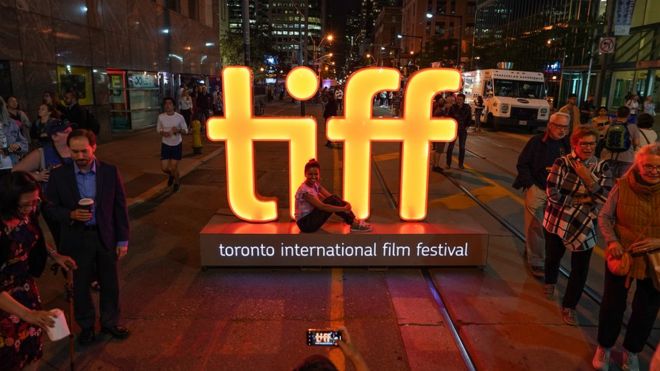 The Toronto International Film Festival is well under way, firing the starting gun of awards season.

If a film generates buzz here at the festival, then that gives it some early momentum which can ultimately carry it through to Oscars in February.

But it’s not just the Academy Awards on people’s lips – the festival is also a chance for political activists to grab headlines, for studios to grab movies they think will sell, and for journalists to grab as much coffee between screenings as possible.

Here are some of the conversations taking place on the ground at TIFF.

In an age of social media shaming, arts festivals and institutions are choosing to be more selective about who they accept sponsorship from.

So far this year, Stagecoach has stopped supporting The Turner Prize while the Tate said it would no longer take donations from Sackler, as a result of certain actions of the companies or their chief execs.

TIFF has also now found itself in the firing line. Pamela Anderson has written to festival chief Cameron Bailey, urging him to cut ties with outerwear brand Canada Goose over their alleged cruelty to coyotes and geese.

The company said “activists have misrepresented the facts”, adding that they were “committed to the responsible use and ethical sourcing of all materials in our products”.

But that didn’t stop animal rights protesters staging a loud protest outside the Tiff Bell Lightbox, one of the major cinemas at the festival, on launch night.

According to Tricia Lebkuecher, senior campaigner at Peta, the Berlin Film Festival has told them it wont accept sponsorship from Canada Goose next year. Campaigners will be hoping TIFF adopts the same policy soon.

Film festivals such as TIFF are a chance for distributors to snap up the movies they think are likely to bring in the most money at the box office in the coming months.

Here’s how it often works. A film will premiere, the immediate reaction from journalists and on social media is positive, and a bidding war breaks out practically overnight over who will release the film.

This year, streaming services in particular, like HBO Max and Disney Plus will likely be in the market for films which could help lure potential subscribers when their services launch later this year.

Some are wondering whether the approach of such companies will be different at TIFF, however, after Amazon Studios got their fingers burned slightly following the Sundance Film Festival in January.

There, the company paid a record $13m to secure Late Night, a film about a chat show host starring Emma Thompson. But the film was a relative flop, and it’s estimated the studio lost around $40m on its release when all costs (like marketing) are taken into account.

Therefore, studios of all kinds – whether streaming services or more traditional – will be wary of overpaying for a film based purely on initial festival crowd reaction.

“In the past, some of these streaming services may have had to overpay in part because directors wanted their films to have a more traditional theatrical run,” notes Variety. “There was a stigma associated with selling to a digital platform, [but] that’s dissipated.”

One film which has caused controversy without audiences having seen a single frame is Harriet – the real-life story of the American political activist Harriet Tubman, who escaped from slavery and went on to rescue around 70 enslaved people in 13 missions.

She is set to be played by British actress Cynthia Erivo, whose casting upset some fans, who said the part should have gone to an African-American, as opposed to a black British actress.

“I do think there are conversations to be had,” Erivo told Deadline ahead of the film’s TIFF premiere. “I think it is coming from a place of people not feeling like they are seen, or feeling like they’ve had enough. And I understand this is a person that means a lot to a lot of people.”

David Oyelowo, who faced a similar backlash from his role as Martin Luther King Jr in Selma, also defended Erivo’s casting. “For me, the conversation begins and ends with… she’s a great actress,” he said.

He noted that Meryl Streep didn’t face the same criticism when she portrayed Margaret Thatcher, nor Christian Bale for playing Dick Cheney. “It’s because of limited opportunities we’ve been afforded historically,” he suggested, “so there’s this scrabbling for the scraps.”

Another film that is sparking conversation about the ethnicity of its stars is The Personal History of David Copperfield, but in that instance the casting of Dev Patel in the lead role has been largely welcomed by fans and critics.