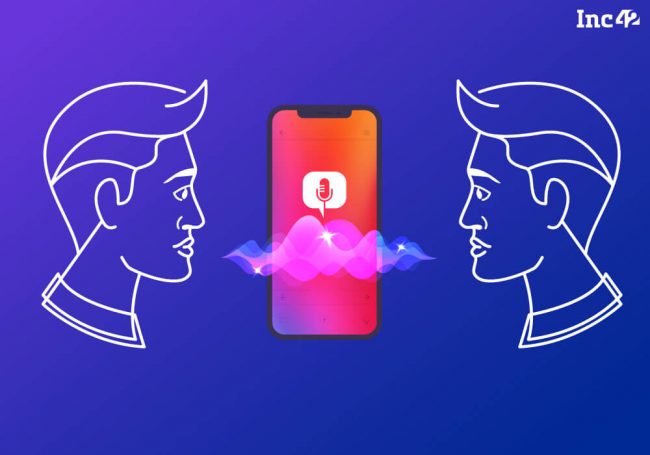 “The great thing about social media was how it gave a voice to voiceless people,” said US-based author and journalist Jon Ronson. Few will disagree with this. However, Gen C has been so busy, scrolling through hundreds of profiles on Facebook, texting on Messenger, and liking pictures on Instagram, that it has forgotten the power of the voice.

Yes. We are talking about the sound that is produced in a person’s larynx and uttered through the mouth, as speech or a song. Our voices have now become limited to sending audio messages and making voice calls on Whatsapp or calling out to Siri and Google Assistant on our smart devices.

“The current suite of social media or networking apps does a lot of things. However, we feel that the true emotions behind messaging, expression of ideas and thoughts are still not captured enough by them,” says one of the co-founders of theVOIZapp, Babatunde Olaniran (Babs),who along with Sidharth Vijayan struck upon the idea for their company during their MBA days in 2016. 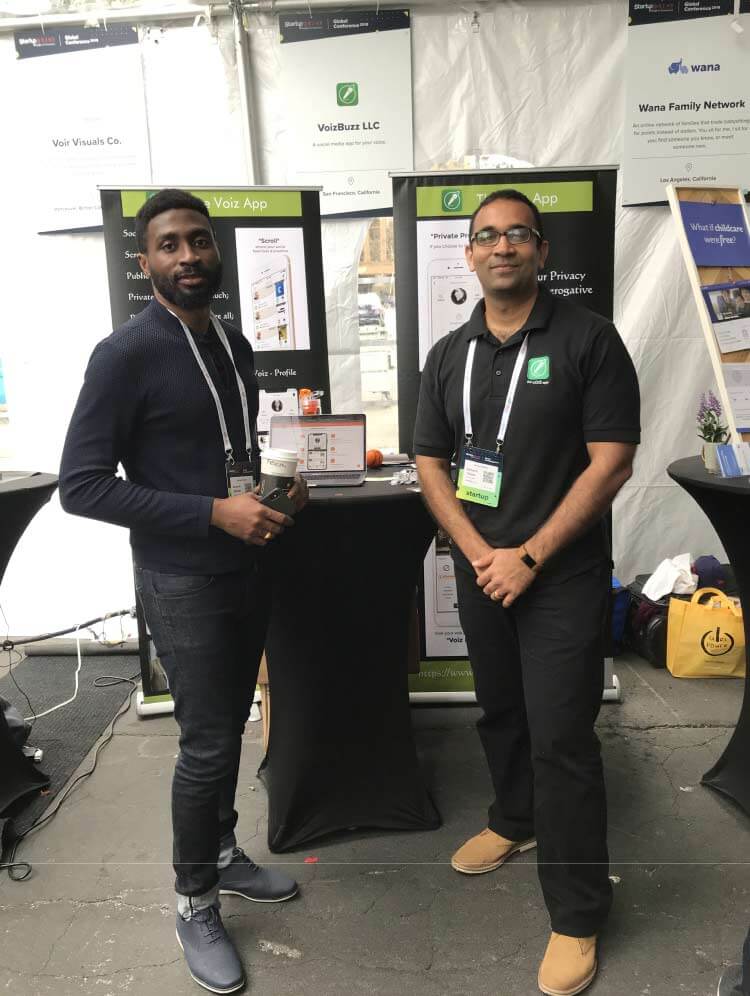 Sidharth adds, “Current platforms traditionally support text, photos, and videos. Text lacks the depth of emotion and photos and videos have an inherent need for composition and perfection, which can be both time-consuming and frustrating to get done well.” So, they decided to build an audio-based social networking platform where content creation becomes extremely easy and users still have access to photos (and video coming soon). One where photos (and videos soon) combined in a unique way with audio to enrich user interactions. The aim is to make it extremely easy to share ideas with the world.

The founders’ vision of embedding the missing emotional layer in social media has certainly paid off. Since the official launch of theVOIZapp in February 2018, the app has gained a following of approximately 7000 users.

As we dive deeper into theVOIZapp’s concept, the founders’ journey and their plans for the future, let’s take a closer look at the metrics of this social media app, which is growing by leaps and bounds by leveraging the most innate part of the human expression — the voice.

Sidharth reminisces, “Our journey started back in September 2016 when we met while pursuing our MBA in San Francisco, California.” Like most management graduates, the duo kept discussing business ideas. During one such discussion, Sidharth pitched to Babs a version of the app where people could start a story with a simple 10-15 second audio track and let others just jump in and continue building the story in their own flavour.

“It somehow sparked a light in Babs and he said, ‘Sid, let’s do it!’ and the rest as we say, is history,” chuckled Sidharth.

From then on, the duo worked on the MVP (minimum viable product) for the app and launched it on November 17, 2017. The MVP gained some traction, after which they then went on to relaunch the app in its current version on February 14 this year. They were also chosen by StartupGrind 2018 as part of a group of 30 startups to demonstrate their app and concept at the event.

theVOIZapp allows users to share photos with an audio story attached to it. They can share content either publicly or privately with family members, friends, and others, thereby facilitating effective communication and socialising.

“I think it had something to do with the fact that we were in an environment where online discussions were open and active, but not very interactive. It seemed like a good problem to solve and a solution that would enable people to create interesting conversation threads and creative stories,” Babs added.

Stage 2: Leveraging Voice To Get A Lead Over Social Media Giants

It is a scientifically proven fact that effective communication is brought about by engaging as many of the sensory organs as possible. TheVOIZapp isn’t the first app to realize this and try cashing in on it. World over, organizations like Amazon, Google, Facebook, and Whatsapp are already working on capitalising a wide user base with innovative voice features embedded in their respective apps and devices. TheVOIZapp also has direct competitors such as HearMeOut and Limor app.

But what is the need for a social media platform like theVOIZapp in India, where the market is already dominated by Facebook, which has a user base of more than 270 Mn, and WhatsApp, with more than 200 Mn users,? “Yes, it’s true that other apps have voice options, but a more relevant question to ask would be ‘How is the voice option applied to the platform to enhance user experiences when it comes to social media interactions’?” asks Sidharth.

The founders explained that at present, there are apps that enable a user to only make calls or send and receive audio messages. They believe that theVOIZapp offers a unique experience and facilitates far better communication as it combines the elements of photo and voice (video coming soon).

TheVOIZapp is available on both iOS and Android. Upon signing in, the app offers the user an interface with three icons at the bottom of the screen, which take them to the three sections into which the platform is divided. Notifications are handled in an innovative manner – tap and hold any one of the three bottom icons to launch contextual notifications for your scroll, rooms and profile. 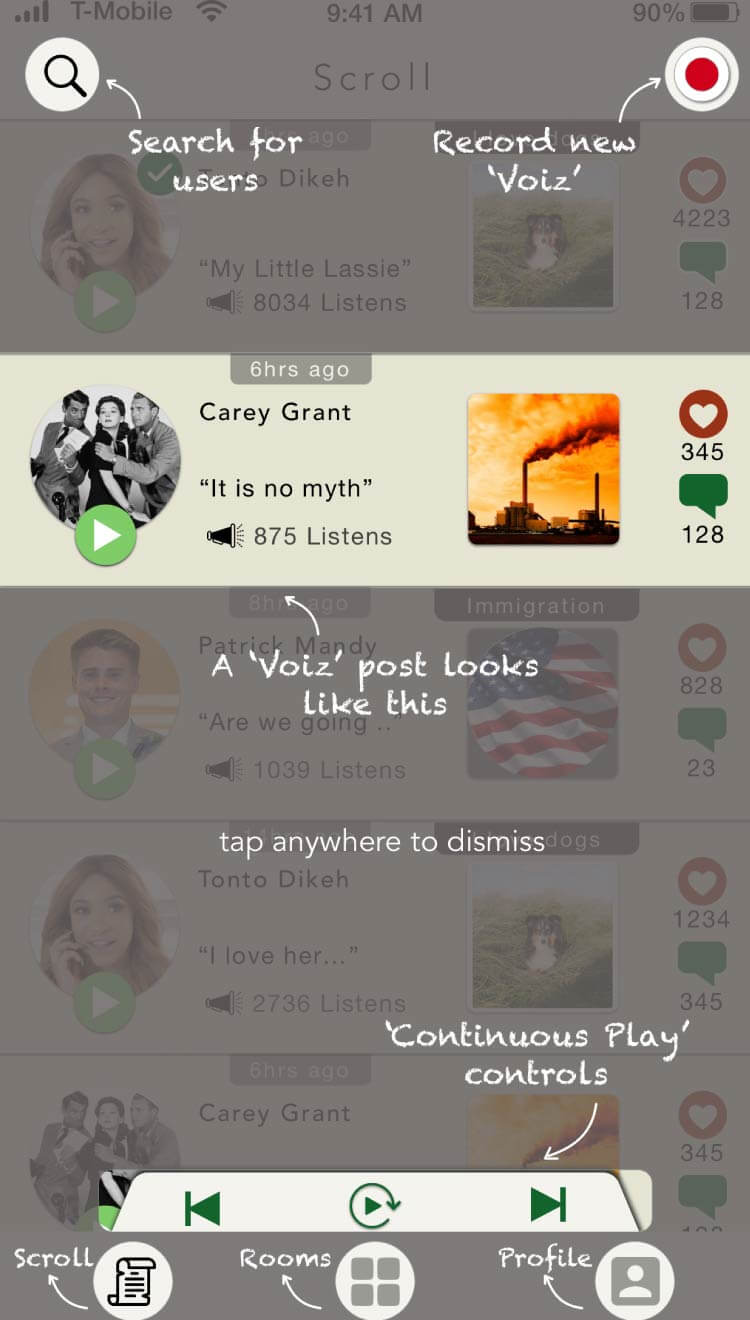 1) The icon on the left navigates the user to his or her feed (referred to as the ‘Scroll’).

2) The middle icon navigates users to the room’s screen (where users can access public and private rooms). Public rooms can be created by any user, shared with the world and can be joined by anyone who wants to join interesting audio and photo conversations or discussions. Private rooms are where users can connect with friends, family, and other users of theVOIZapp.

3)  The icon to the right takes the user to their profile page and settings.

Further, effective communication is not the only problem the duo is trying to cater to. Another key problem they are trying to solve is the issue of impersonation.

As Babs explained, “With theVOIZapp, we’ve created a huge barrier for impersonators, as it’s not as easy to mimic someone else’s voice and to pull a prank on someone, unlike with photos and text, especially in a one-to-one conversation. So, privacy and safety that theVOIZapp provides, along with the emotional element, will help users feel safe while connecting with people and improve the overall experience.”

He added that they’ve delved into research to find that people around the world who can’t read or write face a communication barrier. Such people can benefit from a social platform that uses voice. “Our platform breaks down such barriers and lets people express themselves and listen to others in the language they love to converse with their peers and close ones,” added Babs.

With even social media giants like Facebook and Twitter facing the data privacy heat, it is imperative for young startups to be on their guard in this area. “We understand that user privacy is a huge responsibility and believe that privacy begins from the time a user registers on the platform.” As of now, theVOIZapp uses only phone number verification for registration and password retrieval. “This is required to avoid fraudsters from hacking user accounts or registering multiple profiles and interfering with other users’ privacy,” said Sidharth.

The platform has also been designed in a way to continually remind users to keep private information private. “It’s an ongoing process. Our users have control over choosing a private or a public profile. We don’t collect any sensitive information except for the location of the user. The location data is collected so we can find new friends around the user and also serve up relevant content that is being talked about by others in and around their location,” he added.

TheVOIZapp is currently looking to establish a base and, like any other social media platform, building an audience is the first priority. If they can do this well, the money will follow, is their mantra.

For now, with the hope of acquiring at least two million active users in the first fiscal year of its operation, the startup has taken financial support from friends and family. It has raised a total of $215,000 (~₹1.4Cr) before launch and is looking to raise a bigger round now.“We are focused on the product and on generating traction, as we think they are the key elements for any startup in the online space. We are learning quickly and that is evident from our growth trajectory,” said Babs.

So, How Does theVOIZapp Plan To Gain Traction? Babs replied, “We are connecting with influencers from our target demographic from different walks of life and industries, especially those who have a sizeable number of followers and have deep engagement with their audience. We believe that when we create value for these influencers, they will get on board and easily attract their audience to the platform to share this value.”

In the near future, the startup is looking to expand in three markets — India, Africa, and the US. It also intends to charge businesses for the value it will be providing them with an interesting take on analytics that makes it very relevant to online businesses. “We look forward to that possibility becoming a reality soon, say in the next two quarters,” said Sidharth.

Not only this, theVOIZapp also has plans to venture into apps for wearables like smart-watches in the near future. The two founders are aiming big and are working to bring a “killer feature” that is targeted at the youth, sometime soon. “We’d like to keep that for a future conversation when it is ready to be launched. I wish we could reveal more about it now, but it would really be a buzzkill,” added Sidharth with a smirk, when probed about this special feature.

If there is one thing that gets revolutionised with each passing year, it is the smartphone. The smartphone revolution has taken Drogon -like wings in the last few years. Even though the market grew only about 14% last year, 124 Mn smartphones were shipped across the country. Not only that, the feature phone market registered double-digit growth as well, leading up to 56 Mn phones being shipped in the last quarter of 2017 alone.

This data suggests that the smartphone market isn’t growing in a vacuum and that it’s a collective shift in the way that India connects across its demography and geography. At the intersection of this shift is theVOIZapp .

Recent research by Omidyar Network India suggests that 70% of the minutes a user spends online are spent on social and entertainment apps, 38% of that being spent on Whatsapp, Facebook, and Instagram. With Whatsapp at 200 Mn users and Facebook aiming for 350 Mn, India is becoming one of the fastest adopters of social media for online communication.

Indian startups are looking to cash in on the potential of connecting people on social. That they are looking in the right direction is evident from the success of local players like ShareChat, which has surpassed expectations with over 8 Mn downloads in India.

Further, telecom players are offering cheap data packs, encouraging the use of social media platforms and sidelining phone calls. Although the effect is hard to quantify, it can be felt in our everyday lives. People are increasingly moving away from phone calls towards texting, losing out on creating personal bonds to a large extent. Apps like theVOIZapp have the power to help millennials find their social media ‘voice’ (the real one) and engage better with friends both in India and across the world.

At the same time, the challenges are piled up in a high stack. The success of the venture depends on how many users join the platform and how many of them stick around and bring their friends and family into the ecosystem. This could be a tricky task as across age groups, conversations are becoming increasingly impersonal and social media profiles are getting more aspirational.