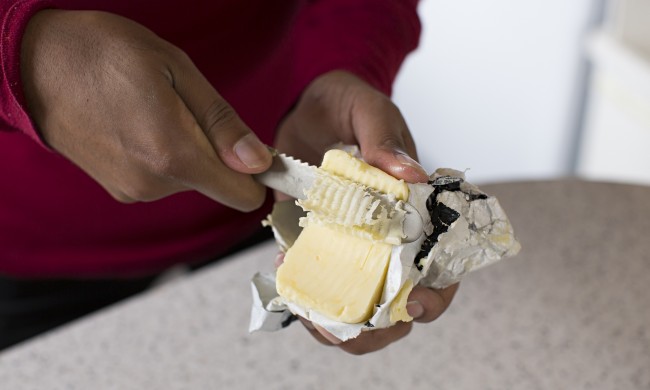 The best way to make butter better is to get it more quickly.

A self-heating butter knife – what a time to be alive! No more waiting for that morning butter, cold from the fridge. No more impatiently steaming your knife over the kettle, or slipping it into a hot pitta, or, er, owning a butter dish. This truly is Jetsons-level living.

The packet declares this “the Most Advanced Butter Knife in the World”, which is pretty much winning a race no one else was running. But they say that’s the definition of genius, don’t they? Maybe. The packaging boasts other terrific slogans. My favourites are “Spread That!” (like a policeman pushing you up against a wall) and “Spaghetti Effect!” – the battle cry of the most rubbish superhero imaginable.

But cool your jets. This gadget isn’t self-heating in the way you’re thinking, like a towel rail or a pocket warmer. There’s no exothermic reaction, or nano-mechanism hidden in the shaft. Its secret is thermal conduction, transmitting heat from your hand to the blade. Put bluntly, it’s made of metal and doesn’t have a handle. As such, it’s slightly oversold; having a satnav in your car doesn’t make you Knight Rider.

But does it do the job? I try it with various types of butter, none of which provide the “spaghetti effect”, an optimistic description of thin noodles of cold butter rasped off a serrated edge. Instead, I get a “scroll effect”, a pleated roll of cream turning over itself, which is better – and strangely addictive, like whittling. I smear-test it on various kinds of bread, including chewy sourdough and a soft, Nigerian-style agege loaf, because I am a multicultural dream. Impressively, it doesn’t tear the latter’s fluffy crumb (though does compress it, like memory foam). It’s lovely in the hand – broad, dense and smoothly granular. In use it’s luxurious, spreading dairy fat like the metabolism of a man over 40. It plasters peanut butter and fridge-fresh chocolate paste. Other cutlery could do that too, but less deftly. This is a dull knife with a definite point. Expensive, arguably unnecessary and classy as hell – let us raise a toast.