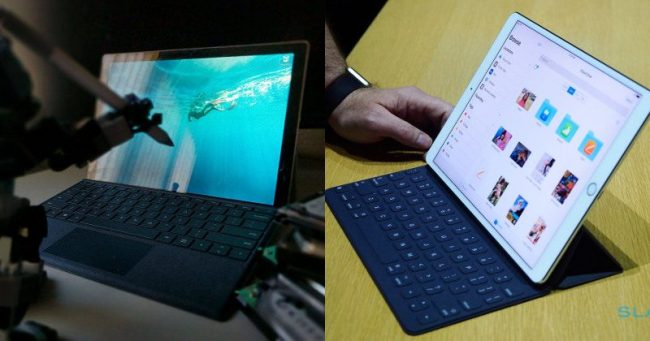 The two premium tablets of the year have been revealed and all gloves are off in the fight between Microsoft’s latest Surface Pro and the new iPad Pros, especially when they get the iOS 11 update later this year. Both have pit themselves against the other and the two are neck in neck in the battle for mobile computing supremacy, as well as consumers’ wallets. Compared to mere media consumption, and usually cheaper, tablets, these two are often billed as productivity machines, your office on the go. So which of the two is really the ultimate productivity master? We take a closer look to find out

“Productivity” is one of those words you throw around and people nod their heads as if knowing exactly what you mean. The thing is, productivity means different things for different people. At its simplest, productivity means being able to accomplish your task in the most efficient way possible, taking up less time, less effort, or both. But as tasks differ from person to person or from job to job, There really isn’t one size fits all tool that would perfect address all kinds of tasks or situations. So we also have to consider the different contexts and different types of work when thinking which of these two powerhouses fits the job just right.

When speaking of productivity in the realm of computers, most people immediately think of document creation and editing. In other words, office suites and personal information management (PIM). While Microsoft Office still holds majority share in that space, gone are the days when it had monopoly in that market. Plus, Office is now available on almost all major platforms (save Linux, unless via WINE), so it’s not really a deciding factor anymore. In that regard, what becomes more important is familiarity with the rest of the platform of the features available in the version for that platform.

Winner: Tie, the iPad Pro with iOS 11 wins in Mobility, the Surface Pro wins in the full desktop version of Office.

Both tablets present themselves as the creative’s tool, mostly referring to digital artists who use a stylus to create works of art. Apple has definitely stepped up its game with the new iPad Pros and their 120 Hz ProMotion screens but the new N-Trig based pens on the new Surface Pro promises to be even better than its predecessors. What it boils down to is the software. iOS apps like Procreate and the new Affinity Photo demoed by Apple definitely takes iPads one step closer to their end game, but they have a few ways to go to match their desktop counterparts. Plus, software like Photoshop, Illustrator, Clip Studio Pro, and the like are more or less industry standard. That’s not even considering there are very few decent 3D modeling software for iOS at the moment.

Wait, isn’t that the same as the above? Not exactly. Photo editing and management calls for a slightly different set of tools from painting, despite Adobe Photoshop (the desktop version at least) being suitable for both. There are tons of photo editing and management software on iOS that more than adequately fulfill those needs. In that sense, the best tool you have is the one that you can take with you always. Given its better portability and mobility stats, the iPad Pro is also more than adequate for this task, without the hardware and software burden of a full-blown Windows computer.

For a certain class of users, being productive simply means being able to access computers from anywhere they are. These people, system and server administrators, usually have the all-powerful command-line and a few web control panels in their toolbox. Since work usually happens on the server side, the client device, the computer that’s physically with the user, sometimes matters less. For system administrators always on the move, mobility is key. Again, here the iPad Pro has an advantage, especially with quite a good selection of remote access tools available, from remote desktop viewers to SSH clients.

On the opposite side of the fence sits the client-side programmer. With the exception of those who code web and server apps, most programming tasks are resource intensive. But equally important is how they are dependent on the computing architecture of the client device. While Apple has made huge strides in the performance of its A processors, its raw processing power still falls behind a Core i5 or i7 with twice or four times the RAM. In addition, the ability to connect mobile devices, in the context of mobile app development, is simply impossible on an iPad.

Some people don’t need specialized apps to be productive. For these people, the basic office software, plus some todo management and calendar tools, are more than enough. For these people being agile and mobile might be more important. The new Surface Pro may be marginally thinner and lighter than its predecessor, but it is still eclipsed by the iPad Pro in that area. Especially by the iPad Pro 10.5. There might be some debate on kickstands and keyboard covers, but the iPad Pro is also perfectly usable without a keyboard when in a pinch. Given the still lower number of touch-friendly apps on Windows 10, the same can’t always be said of the Surface Pro.

Although multi-tasking is now largely debunked in productivity circles, it is still a prime feature on computers and mobile devices. The new iOS 11 definitely levels up the iPad Pro’s game, at least when it comes to ease of use. That said, iOS users will still be left wanting for more, mostly because of iOS’ strict rules on memory and CPU usage. Windows doesn’t have an aggressive process killer, so users won’t suddenly find their browser tabs dormant. Sure, it also drains the battery faster that way, but sometimes getting through work faster saves more battery in the long run.

If battery longevity, however, is paramount to productivity, then the iPad Pro will always be the winner. The combination of energy-efficient hardware and smart software ensures you won’t quickly run out of juice in the middle of your work day. While the new Surface Pro boasts of a drastically improved battery life, those numbers have been deemed to be very generous estimates. Apple’s figures are usually more spot on. Plus, the fact that you can top off an iPad Pro with a power bank is a huge life saver when there are no power outlets available.

Use the right tool for the right job. In most of the cases, the availability of software pretty much determines whether a Surface Pro or iPad Pro is that right tool. That said, Microsoft should probably note that in the areas where it does still have an edge, Apple is already catching up. Given changing trends in software use and even software development, Redmond could find its advantages confined to the more stationary desktops and laptops, making something like the Surface Pro practically worthless.