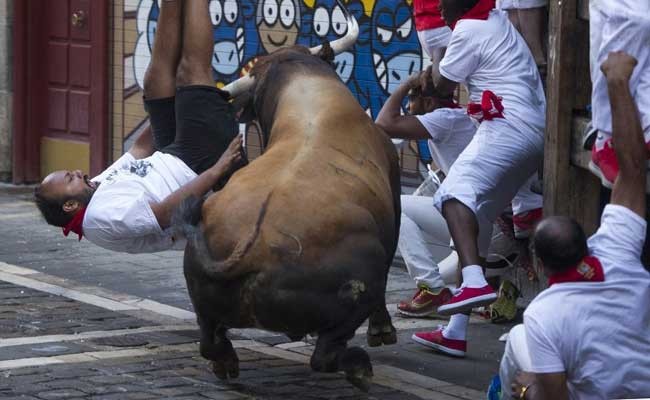 A participant is tossed by fighting bull in the San Fermin bull run in Pamplona. (AFP Photo)

PAMPLONA:  Five foreigners, including two Americans, were among six people gored in a hair-raising second running of the bulls Friday at Pamplona’s San Fermin festival the Navarra regional government said.

A government statement said a Spaniard aged 58 and a 73-year-old South African man, identified only by the initials MHO, were in serious condition after being gored.

The regional government said a Canadian was gored in the bull ring just before the end of the run but it gave no details on his condition or identity. It said eight others were also taken to city hospitals for other injuries suffered in the run. 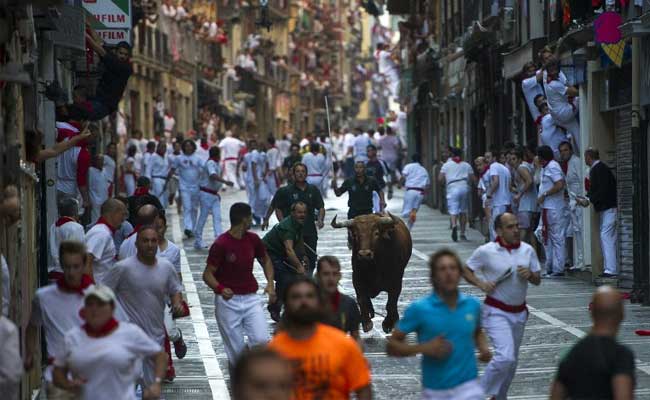 Several of the six bulls used in the run got separated from the pack moments into the 8 am run and began charging whatever came in sight.

One runner could be seen pulling a bull away by the horn to prevent him goring a woman and a man who had fallen to the ground. Another beast repeatedly tossed a man in the air before being lured away by other runners.

More than a thousand people took part in the run, which lasted nearly six minutes, more than twice the normal running time.

Runners dash along with six bulls down a narrow 930-yard (850-meter) course from a holding pen to Pamplona’s bull ring. The bulls later face almost certain death in afternoon bullfights.

Bull runs, or “encierros” as they are called in Spanish, are a traditional part of summer festivals across Spain. Dozens of people are injured in the runs, mostly in falls.

In all, 15 people have died from gorings in the festival since record-keeping began in 1924.