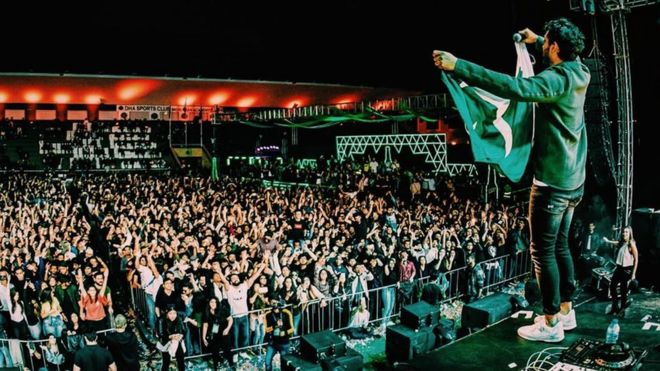 A music festival in the Pakistani capital Islamabad had to be halted after hundreds of fake-ticket holders stormed the venue, organisers said.

Solis Festival said people had broken through barricades after being denied entry to the event on Saturday.

Many then climbed onto a VIP stage which collapsed as a result of overcrowding, causing injuries.

Several women accused men of groping and harassing them in the chaos.

Dozens accused Solis Festival of poor planning and security management, calling for “answers”, but organisers said they had taken the precautions they could.

“We chose the venue and our security based on the number of tickets sold… however we underestimated the sheer volume of fake tickets sold illegally,” said Solis in a statement on Instagram.

“We are deeply sorry that this experience was ruined by others. We could not put your safety and security at risk and had to stop the event.”

Solis Festival calls itself Pakistan’s first and biggest concert series. This was the fourth of its electronic dance music events featuring international performers.

Hundreds were in attendance at the festival when it began to be overtaken by those who reportedly held fake tickets. VIP tickets were sold for up to 11,000 Pakistani rupees ($71; £54).

One woman, who said she was at the festival on the VIP stage, said the concert was 30 minutes in when the stage collapsed.

“[The stage] was almost 7ft [3m] high and I lost consciousness for a minute. All I remember is me struggling to get up and a guy starts snatching my bag. We’re getting stamped upon and literally no one’s helping… [people] start touching, groping and harassing us,” said an Instagram user named Shanza.

“Where are you now, Solis festival? How are you planning on compensating the physical pain, mental trauma [and] sexual harassment?” she asked in her post.

Another woman with a VIP ticket said she too experienced harassment after the stage collapsed.

“When I regained consciousness, a guy had ‘fallen’ on top of me… moving his hands all over my body ‘trying to get up’. I pushed him and [then] he spit on me. I tried to get up but I couldn’t,” Fatima Ahsan had said in a post to a private Facebook group titled “Soul Sisters Pakistan”, according to a screenshot that has been circulating on Twitter.

“Solis organisers should be held 100% responsible”, said one Twitter user. “Complete negligence on their part.”