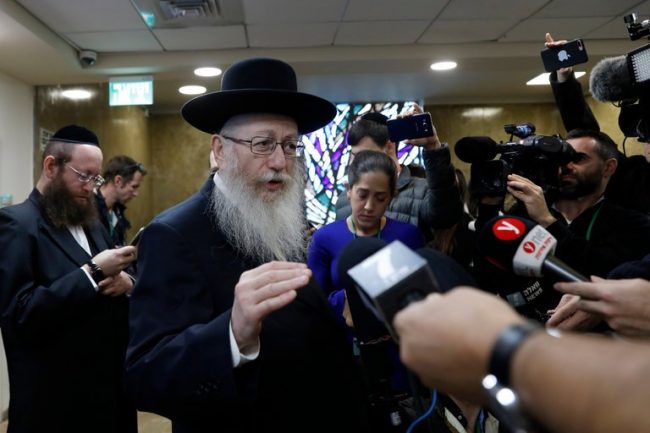 Prime Minister Benjamin Netanyahu of Israel, already embroiled in corruption scandals, scrambled on Sunday to stabilize his governing coalition after an ultra-Orthodox minister in his cabinet, citing Jewish values, resigned on his rabbi’s orders.

Yaakov Litzman, the health minister, quit in protest over railroad repair work that was carried out on Saturday, the Jewish day of rest.

Though the government did not appear to be in imminent danger of collapse, the resurgence of the Sabbath wars, a perennial issue in Israeli politics, was just the kind of trouble that some analysts said could eventually unravel the coalition and lead to early elections.

“If some solution enabling him to return to the Health Ministry isn’t found in the next few weeks, his resignation is liable to herald the beginning of the end of the fourth Netanyahu coalition,” Yossi Verter, the political analyst of the liberal Haaretz newspaper, wrote on Sunday of Mr. Litzman’s resignation.

Mr. Litzman’s party, United Torah Judaism, holds six seats in the 120-seat Knesset, or Parliament. Despite his resignation, his party has not quit the coalition. Mr. Netanyahu’s other ultra-Orthodox coalition partner, Shas, with seven seats, has also shown no desire to leave a government that has so far brought benefits to the ultra-Orthodox public — known in Hebrew as Haredim, or those who fear God — including funding for its institutions.

This Netanyahu government, with a total of 66 seats, depends on both parties for its majority.

“All the indications are that nobody is interested” in breaking up the coalition, said Abraham Diskin, a professor emeritus in the department of political science at the Hebrew University of Jerusalem. “But it is impossible to prophesy; I don’t know how it will end.”

Some Haredi-run news media outlets have increasingly pressured politicians, and their spiritual guides, to take a firmer stance on issues related to what they see as desecration of the Sabbath.

Commentators noted that the health minister’s resignation over work done on Saturday could put Aryeh Deri, the leader of Shas and the interior minister, in a difficult position, at risk of being seen by supporters as not defending the sanctity of the Sabbath.

On the instructions of his rabbi, Mr. Litzman had demanded that the railway maintenance work be carried out on a weekday, which would mean creating large traffic jams on the country’s roads and inconveniencing tens of thousands of Israeli commuters.

“To my regret Israel Railways has recently turned the Sabbath into ‘national renovations day,’” Mr. Litzman told reporters after submitting his resignation, which is scheduled to go into effect within 48 hours.

Under a decades-old, delicate agreement to maintain the status quo between Israel’s secular and religious sectors, the public transportation system, including the state-owned railway, is largely dormant for the duration of the Sabbath, from sundown on Friday to nightfall on Saturday.

“The Sabbath is important to us, and so are the needs of all citizens of Israel, including, of course, the need for safe and continuous transportation,” Mr. Netanyahu said at the start of the cabinet meeting.

Mr. Netanyahu, plagued by graft investigations involving illicit gifts of cigars and champagne, among other things, worked quickly to minimize the damage and keep his government on track.

In a meeting later on Sunday, Mr. Netanyahu reached some agreement with Haredi party leaders, including quickly introducing legislation to limit the opening of convenience stores on the Sabbath. He declared his coalition to be “strong and stable.”

Mr. Netanyahu plans to serve as health minister for the time being, and to promote legislation allowing Mr. Litzman to return as a deputy minister of health in a way that would give him administrative responsibility for the ministry without serving as a full minister for government decisions he opposes on religious grounds. Israel’s Supreme Court ruled against such an arrangement two years ago.

Mr. Litzman said he would consider returning as deputy minister only after the convenience store law had passed.

Previous governments have faced crises and even fallen over issues like airplanes landing on the Sabbath.