HOUSTON — Russell Westbrook has been eliminated from the playoffs seven times, and the scene each time has been mostly the same. As the clock edges closer to zero, Westbrook flings himself all over the court, running his tank so far past empty that the gauge combusts, and he isn’t much more than a puddle of sweat and adrenaline.

As he walked off the floor Tuesday, shirt untucked and head down after the Thunder lost 105-99 and were eliminated in five games against the Rockets, he found the tunnel before the final buzzer actually sounded, leaving as Alex Abrines launched a half-court shot.

Westbrook’s brilliant, historic season had its book closed, and its final chapter was 47 points on 15-of-34 shooting, 5-of-18 from 3, 11 rebounds and 9 assists. He was sensational. He was also erratic. He was the complete summation of Russell Westbrook, circa 2017.

The Thunder leave Houston frustrated and disappointed, knowing they weren’t overwhelmed or overmatched by the Rockets. They were a handful of plays away in three of the four losses in the series. But they also walked away knowing that in a season full of doubt, unknowns and worry, they produced a successful, stabilizing campaign that has set a foundation for them to build on. The result was unsatisfying, but just as when they stood on July 4 following Kevin Durant’s announcement, staring at the prospect of the entire franchise being burned to the ground with a complete teardown possible, there is a roadmap that exists.

Now, it’s the same question Westbrook asked the front office in the moments after Durant departed: What’s next?

The Thunder roster was vastly different from the one they expected. On July 3 last summer, Presti envisioned Victor Oladipo and Enes Kanter anchoring his bench, with a potential starting five that featured Westbrook, Durant and Al Horford, who was strongly considering OKC before he joined the Boston Celtics as a free agent.

The supporting pieces were selected as specialists, with specific roles in mind to complement the stars.

But Durant’s move to the Golden State Warriors, paired with Horford’s decision to pass on a reunion with college coach Billy Donovan, left Westbrook operating as a solo artist.

A once deep and potent roster suddenly became thin and one-dimensional. It was instantly flawed, and while Donovan worked to reverse-engineer the team to fit around Westbrook’s strengths, much of that devolved into, “Here you go, Russ. Do something.”

The amount that Westbrook controlled the ball was historic, an off-the-charts usage rate finishing at 42.5 percent, and the Thunder lived and died on his clutch-time heroics. So much of the Thunder’s season, not to mention their future, hinged on internal development of their youth, and though there were positives steps, Westbrook’s domineering potentially stunted their growth.

That’s where most of their future rests, too. The Thunder planned for Durant to re-sign, but their contingency was in place if he didn’t, and it was in the roster’s upside and youth. The approach for most every team transitioning from losing a franchise cornerstone to rebuilding is to acquire youth and assets. The Thunder have one of the youngest rosters in the league, stacked with former lottery picks. They didn’t need to blow anything up, because they already had the parts they’d be seeking.

Presti might look cautious and overly calculated, with the perfectly parted hair and expensive glasses, but few executives are as brash and bold as he is. The Thunder will hunt trades to upgrade the team, and you can mark most of the roster as available. But really, they are banking on where they’ve been investing the past few years.

Steven Adams, Alex Abrines, Oladipo, Andre Roberson, Jerami Grant, Kanter, Domantas Sabonis and Doug McDermott are all under 25. While so much focus was on Westbrook’s surrounding help — and whether it was any good — it was often forgotten that he was leading one of the youngest groups in the NBA. Those pieces can be either part of the core that supports Westbrook or assets to deal in the future.

The Grant trade from early in the season was a good example of Presti’s approach in restructuring. The Thunder had Ersan Ilyasova, a 29-year-old stretch shooter on an expiring deal and a piece that would fit well around Westbrook and probably make the Thunder better this season. But Presti moved him for Grant, a 23-year-old, versatile, athletic freak on a cheap, controllable contract.

The Thunder develop players as well as any organization, and there’s a lot of confidence that Abrines and Sabonis will blossom into high-level role players behind Westbrook. Behind the scenes, Westbrook is said to be very happy with the players on the team and the outlook of the roster. Then again, he isn’t the type to complain and knock on the GM’s door asking for help.

As one source has repeated, Westbrook has never complained about players, this year or in years past, and he prefers to stay out of most front-office dealings.

The Thunder have only one clear unknown about the existing roster: Roberson, a restricted free agent this summer. After the team inked extensions with Adams and Oladipo last October, Roberson and the Thunder couldn’t find common ground. Roberson has his limitations, but he is one of the elite defenders in the league, and with some development and better understanding of his role as the season went along — the Thunder preached less shooting, more cutting and driving — the Thunder are intent on keeping him. 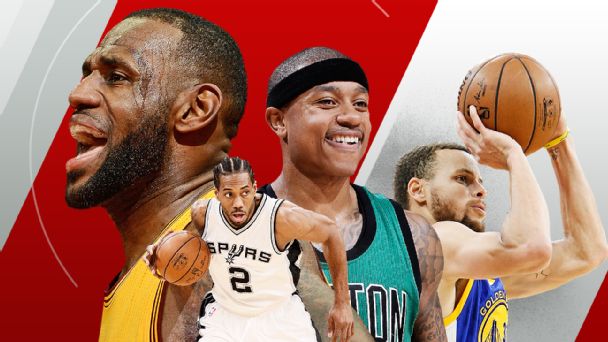 We’ve got you covered all the way to the Finals with the latest news, schedules, analysis and more. 2017 NBA Playoffs »

• Fundamental genius of the Spurs’ way
• Warriors strike early, sweep Blazers
• The unique evolution of Mike Brown
• Does LeBron have enough left in tank?
• Thomas: ‘Not one man can guard me’
• Theme for Clippers-Jazz: Next Man Up
• How will Clips fare without Blake?

There is one more question, and it’s quietly their biggest of the offseason. With the new collective bargaining agreement in place, Westbrook will be eligible for another extension as the team’s designated player.

After signing an extension last summer in the wake of Durant’s departure, Westbrook can sign another in the ballpark of $220 million over five years this summer. Westbrook is signed through the 2017-18 season, with a player option on the following year, but the Thunder would obviously like to have a longer commitment from their franchise player.

The expectation is that they will make the offer, but should Westbrook decline, all that talk of stabilizing the franchise would get a little more wobbly, and with only a year guaranteed, talk of trading him could spark again. It will certainly be alarming for the front office, especially after what it went through with Durant.

From anyone close to Westbrook or the Thunder, though, the perspective is that the extension Westbrook signed last summer was a public display of commitment to the franchise for the prime of his career. As the Thunder know all too well, players can change their minds, but the expectation is that Westbrook is committed to the Thunder for the foreseeable future. With the chance to become a $40 million per year player and the highest paid in the NBA while loving the franchise and its direction, Westbrook seems to have every reason to re-up again.

But until there’s ink on another contract, the Thunder will sweat it out.

That’s one of the reasons they made the deadline deal to add Taj Gibson, a 31-year-old unrestricted free agent likely to sign somewhere else. It was an illustration of their effort to win this season and provide Westbrook a bit more help.

The Thunder have spent the season compiling data and film of Westbrook, and they will not only try to reinforce the team with players who complement his skill set but also work to develop his game to utilize his teammates better. As assistant GM Troy Weaver said, the Thunder think Westbrook will be a much better player next season because he spent this one figuring it all out.

Ask anyone within the organization if this season was a success, and they’ll sarcastically laugh off the question. To produce 47 wins and be competitive in the playoffs after losing a star the caliber of Durant for nothing in return, to them, was an incredible achievement. This was the season of Westbrook and his assault on history, but to the Thunder, it was one of resilience and stability. Absorbing and enduring Durant’s loss and winning only eight fewer games is something the Thunder are quite proud of.

This was Year 1 post-Durant. It carried a lot of grace and forgiveness as the Thunder stumbled their way through. It was exciting and enthralling for the team, but it’s also over now.

Year 2? That’s when the true rebuilding phase begins, and along with it, the pressure of climbing back to the top.