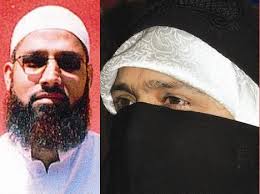 Srinagar: Incarcerated pro-freedom leader Dr Muhammad Qasim has been denied permission to talk to his jailed wife, Syeda Asiya Andrabi, a statement said on Sunday.
“Probably Jammu Kashmir is the only state in the world where communication between husband and wife is subservient to the orders of home ministry.” This was stated by the Spokesperson of Muslim Deeni Mahaz headed by Qasim.
As per the statement “should husband and wife be allowed to talk or not this is now to be decided by the home ministry! The environment of terror and tyranny created by PDP and BJP is unparalleled in history of Kashmir and was not even seen in the worst period of Ikhwan in 1996.”
Qasim who has completed 24 years in prison had asked the court to allow him to communicate with his incarcerated ailing wife Asiya who is in imprisoned in Amphala jail. The court according to the statement denied permission observing that it was under the purview of jail authorities.
“About a couple of months back the jail authorities assured Dr Muhammad Qasim that he would be allowed to talk to his wife, but now the jail authorities have informed him that they had sent the matter to home ministry and the reply is awaited,” the statement said.
“Muslim Deeni Mahaz is not astonished by this tyrranical approach of the government towards Dr Qasim and Asiya Andrabi and this in no way will break their resolve,” the statement added.