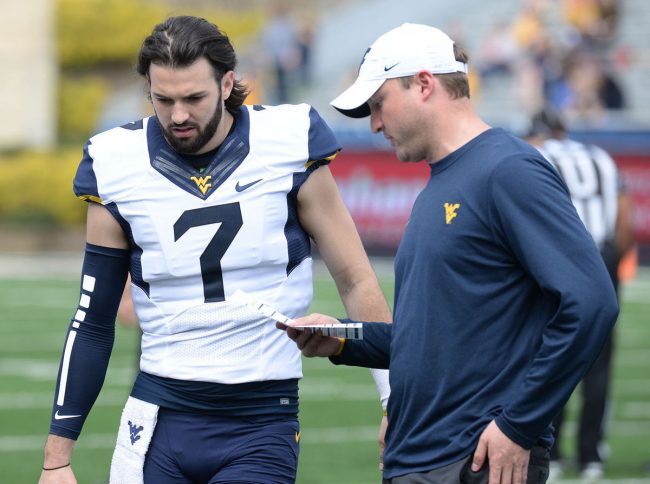 MORGANTOWN — There were plenty of interesting subplots surrounding the Mountaineers’ season opener against Virginia Tech.

But one of the more intriguing was how WVU head coach Dana Holgorsen would handle giving up the play-calling duties, having passed those over to West Virginia’s first-team offensive coordinator Jake Spavital.

While the Mountaineer offense wasn’t perfect last Sunday, as evidenced by the 31-24 loss to the Hokies, WVU’s offense still churned out 592 yards (371 passing and 221 rushing) against a Tech defense that allowed just 340.7 yards per game last year (140.5 rushing and 200.2 passing) and returned seven starters from that unit.

“It was awesome,” said Spavital of the communication between he and the head coach. “He told me when I had four downs and when we might get into certain types of situations. He helped with substitutions, and he had great eye on how things were flowing. I don’t think the clock management at the end of the game could have been any better. I thought there were a ton of positives out of it. I thought Dana interacted well with me in terms of throwing out ideas. It was very productive. I don’t have all the answers, and I love to have the opinions of others. I like to collaborate as much as possible, and I thought things ran pretty smooth in terms of communication.”

Holgorsen has spent the previous nine years calling the offensive plays, so he understands what it is all about.

“Because he’s called games before, he understands how hard it is to call games when you have a lot of chatter in your ear,” explained Spavital, who had called plays at his previous coaching stops of Cal (2016) and Texas A&M (2013-15). “You have a lot of things running through your head when you’re calling plays, so you need great focus, and it’s hard to have that if you get too much chatter. That’s why he lets Gibbie (WVU defensive coordinator Tony Gibson) and he lets me do our thing. He lets us focus on what we do. We’ve studied it all week, and we have a great feel for what we’re trying to do, and he’s going to let us do it. But when it’s time to give advice, he’s going to give advice.”

Holgorsen admitted that he wasn’t quite sure what to do with himself at times in WVU’s opener, which was the first time since 2007 he had not been focused on calling offensive plays. Through his two seasons at Houston (2008-09) and one at Oklahoma State (2010) as offensive coordinator, and then his first six seasons at West Virginia as head coach, he had always concentrated on calling plays. He’s turned those duties over to Spavital this year, but noted that it was odd at times.

“I didn’t know what to do for the first quarter,” Holgorsen chuckled. “I was looking for people to talk to. This is a true story; it’s funny. I’m literally talking to myself, because the worst thing you can do is click over to the offense (on the headset) and start talking. There’s communication that has to exist, and I’ve told people to shut up numerous times – ‘Shut up, I need this guy to talk. Nobody else.’ So, I knew better than to do that. I’ve never done that to Gibbie. I’ve flipped over and listened, but I won’t talk until a change of possession or timeouts or stuff like that. I hear it, and I react to it, but I don’t have the talk button on. So when I went to that third line, which is special teams and those guys go back and forth on a lot — they have to go on offense to do a lot of things or have to go defense to do a lot of things.

“So, I’m sitting there and talking to myself for the whole first quarter. I was just like, ‘This sucks.’ So I went over and yelled at (director of player personnel Ryan) Dorchester to go to the empty line, so I had someone to talk to.

“(Our communication) was fine,” concluded Holgorsen. “I didn’t feel the urge to intervene whatsoever. I thought we had a really good handle on it.”