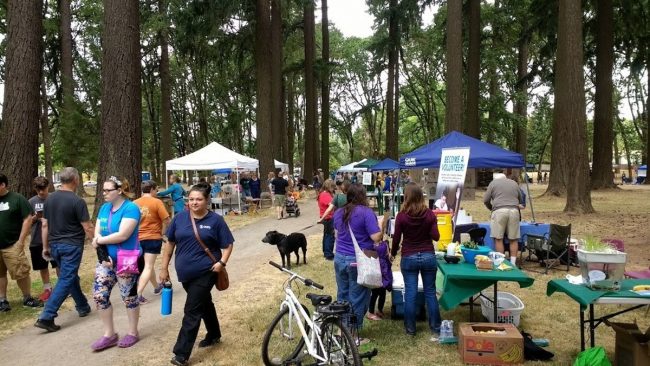 A small neighborhood park in Northeast Salem has turned to a festival in attempt to combat the stereotype that it’s a blight on the city.

“It’s notorious for being looked down on,” Organizer Leslie Polson said of the northeast part of town.

According to US Census data, median rent prices and income in northeast Salem fall on the lower end of the city’s spectrum.

Polson said the festival is trying to give people a sense of pride in their neighborhood and show that it’s a beautiful part of Salem.

Now in its third year, the Englewood Forest Festival is an opportunity for residents to enjoy music, art and workshops on Saturday from 10 a.m. to 4 p.m. at 1260 19th St. N.E.

Polson said after the first festival, people in the neighborhood started having potlucks.

“It actually started building community,” she said. “People were like that was so much fun let’s have a potluck in a couple weeks.”

Polson called the area a cohesive neighborhood with a bad reputation. On Sunday someone died after a shooting in the park, and Polson said her car has been stolen twice.

But, she said, “The whole point is to celebrate the positive in the community, not to sit and hunker down and be afraid.”

The area is rich in history. Englewood Park is Salem’s oldest park, but not many know about it, according to event founder Lynn Takata. Takata said one of the reasons she chose to buy her house was because of how unique Englewood Park is.

“It’s kind of a little hidden gem,” she said.

The 7-acre park is home to trees that predate the pioneers, giving people a sense that they’re in the woods while still in an urban environment, Polson said. There’s also a basketball court, seasonal splash fountain, playground and horseshoe park.

Takata came up with the idea for the festival with the intention of promoting the creative spirit of Englewood with artists, musicians and workshops that would showcase some unique features of the park.

When she canvassed the neighborhood the first year to get a sense of what people thought, she was surprised to learn that many didn’t know Englewood Park existed.

“There isn’t a lot of awareness of Englewood as a neighborhood and Englewood Park,” she said.

On Saturday, the event will feature live music from local musicians like Ty Curtis and Sig Paulson. Some of the performers, like Erin Westfall, live in the Englewood neighborhood.

There will be opportunities to create mosaics, clay medallions and native plant rubbings.

At 2 p.m. there will be an aerial dancing performance. Vendors like The Northwest Hub offering bike repairs, and The Athletic Edge offering an obstacle course for kids, will be set up throughout the day.