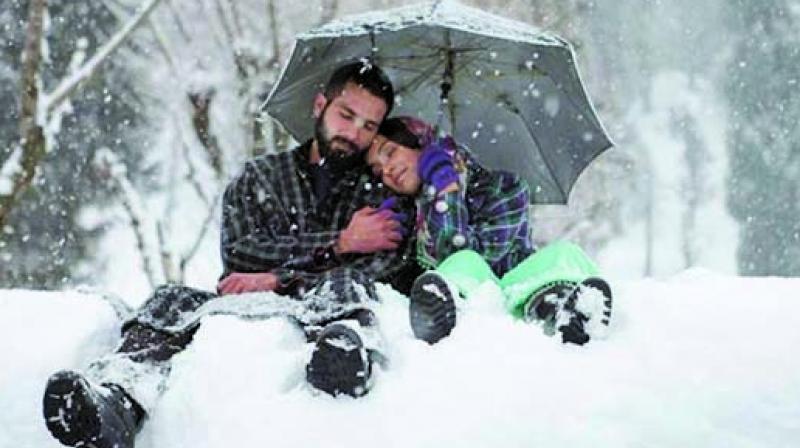 A still from Haider shot in Kashmir

Over the years Kashmir has been the most favourite destination for Bollywood. Touted as the paradise on the earth, Kashmir, not only has provided the beautiful picturesque locations in the films made during 80s and 90s, but has also raised interest for mainstream cinema to depict the grim realities of the valley. Although the destination still serves with the best of sceneries and to re-establish the beauty, the scenario has changed with the depiction of the state in Bollywood films. While films like Kashmir Ki Kali, Silsila, Roza, Jab Jab Phool Khile, Kabhi Kabhi, Aap Ki Kasam, Heena, Jaanwar, Raazi, Manmarziyaan, Notebook among others, romanticised the valley’s natural beauty, films like Saat Khoon Maaf, Highway wove stories about dysfunctional lives and self-discovery in the backdrop of the valley.

With the recent historic move of nullifying the Article 370 in Jammu and Kashmir by the ruling NDA government, connects to what perhaps the Bollywood films demanded through the realistic presentation of the valley than just romanticising the state.

After the political unrest in Kashmir and the eruption of militancy, films like Machis, LOC Kargil, Lakshya, Haider, Aiyaari, Fitoor, Bajrangi Bhaijan, and most recent Hamid, No Fathers In Kashmir and Widow of Silence narrated the stories of political strife, civilian struggle and terrorism from the valley. While Mani Ratnam’s 1998 release Dil Se was a love story that fall victim to terrorism, Haider narrated the political conflict and civilian struggle, Farhan Akhtar’s 2004 release Lakshya was set at the backdrop of Kargil war, Mission Kashmir depicted the violence and victims of Kashmir, J. P Dutta’s LOC Kargil was based on Kargil war in 1999. The most recent films like Hamid – set on a Kashmiri boy and a CRPF jawan and the contemptuous behaviour of the state police, No Fathers in Kashmir – a social satire on politics, and Widow of Silence – plight of Kashmiri widows bring out more realistic situations, far from the picturesque location that periodically popped up in Hindi films.

“Over the years cinema has become more real in the portrayal of Kashmir. Now the filmmakers are aware about the social and political situation in the valley and they try to show the harsh realities of the state. The conflict in the state is very real and that should come out,” says film critic Murtaza Ali Khan. As the realistic cinema has taken over the mainstream commercial cinema, filmmakers have become more sensitive towards the Kashmir issues than just showing the state as heaven on the earth. “Filmmakers are trying to be as close to the reality as possible and today’s Kashmir reality is about the political and militant challenges,” adds the critic.

In last 15 years the situation at the borderland has gone bad to worse, the films in the last two decades have usefully shown the realities. “The films these days are not merely made to romanticise the valley but for more responsible purpose – to make people aware about the plight of the locals in the state. We need to see more and more real and contemporary stories about Kashmir in films so that the aim of cinema is fulfilled,” opines National award winning filmmaker Teena Kaur Pasricha.

While Kashmir has always been a state of interest for political parties, Bollywood too tried to use the opportunity as much as possible. Says filmmaker Fauzia Arshi, that Bollywood is in a political trap that it has stop seeing the beauty and any positive side of the place. “We are in a political trap. The perception to see things has changed as far as Kashmir is concerned. We used to see beauty of the place in the films but now we give political angle to everything. Kashmir is still beautiful but we are becoming irresponsible and selfish as entertainers. Bollywood just wants to encash the opportunity,” asserts the filmmaker. To which Ali adds, “It is no more about the beauty of the place but the plight of the people living in the state. It is about reality and filmmaker’s job is beyond just entertaining the audience.”