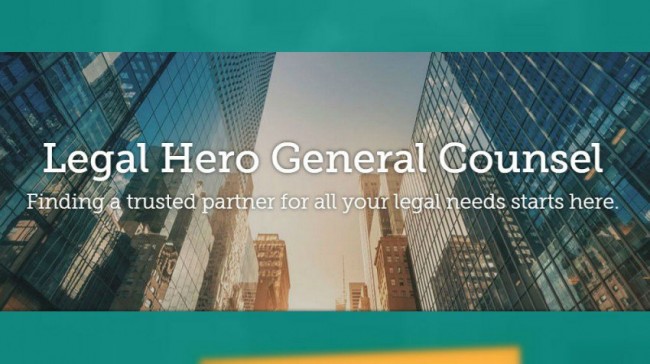 In addition, Web building software company Wix made headlines recently with an announcement of its own.

Read about these news items and more in this week’s Small Business Trends News and Information Roundup.

Looking for General Counsel? This Site May Do the Trick

Legal Hero, an online portal designed to connect small businesses and entrepreneurs with legal help, has introduced a new service that will provide “on-demand” legal counsel for these companies.

Wix.com, the drag and drop Web design platform, has just announced a full redesign of its cloud based Web editing software. The redesign introduces a range of new features, including some to help businesses personalize and tailor their sites to be more effective. If you are a do-it-yourselfer when it comes to your small business and its website, you may already be familiar with Wix.com.

It’s not unusual for businesses to proclaim their commitment to the greater good, although only a few actually live up to their promises. That’s why Kickstarter’s decision to reincorporate as a public benefit corporation has pleasantly surprised many. The crowdfunding company has joined the ranks of organizations like Patagonia and This American Life to take this big step.

One of Twitter’s trademark features is its 140 character limit. But is that about to change? A report from ReCode suggests the social media company is considering a product or feature allowing users to create longer-form content on the service.

The long-forgotten Facebook Notes feature is finally getting a much needed makeover. The refreshed feature now comes with exciting new tools to add images, format layout and resize photos — and is available to everyone. Facebook published a post to announce the official roll-out of the revamped feature currently available on its desktop version.

Dennis Mortensen of X.ai: Artificial Intelligence is Driving the Rise of Virtual Agents

I’ve been using the Amazon Echo device for almost a year. And most of what I do is ask Alexa — the virtual assistant in Echo — what the weather is, who won the Rams game, add batteries to my shopping list, or even to play the new song from Prince. I also use Siri to dial people on my iPhone when I’m in the car.

The First LG Laptops Are on Their Way to the U.S. Market

LG, the Korean electronics giant known for its smartphones, appliances and tablets is bringing its first laptops to the U.S. market. The company announced the release of the Gram series of laptops in a press release recently. The machines, named Gram to highlight their light weight, are available in 13-inch and 14-inch models.

9 Photo Apps for Windows 10 to Spruce Up Your Images

Nearly everything associated with your small business online presence — and some offline tasks — requires having top-notch images. These images have proven to be vital for social media updates and to make your website look a little better. Quality images can also spruce up presentations and more.

Spotlight: GreyCampus Offers a New Way to Train Your Team

Training employees in different areas of your business can be a time-consuming and expensive process. You want employees to learn from an actual instructor who knows what he or she is talking about. But the smallest of businesses don’t always have the personnel available to drop their own work and train new team members. That’s where GreyCampus comes in.

Microsoft just wrapped up a live event in New York. There, the company announced a fleet of new products it is calling the new era of Windows 10 devices. Two new Surface devices, several Lumia phone,s and a HoloLens — yeah, one you might actually be able to buy — top the list of the most interesting devices unveiled.

The Moto X Pure Edition is an Anti-Bloatware Smartphone

The Moto X Pure Edition is the third and latest iteration of the Moto X, and surprisingly priced lower than 2014’s Moto X. It’s the first Motorola phone with which Lenovo has been involved. And the device may become best known for what it doesn’t have rather than for what it does.

Stagefright Update: Your Android Phone May Still be Vulnerable

It looks like Stagefright strikes again. The security bug that preyed upon phones running versions of Android OS between 2.2 and 4, has now reared its head to attack devices running Android 5.0 and above. Joshua J. Drake, Zimperium zLabs vice president of research, has found another security issue in Android called Stagefright 2.0.

LG has introduced a new smartphone series. Dubbed the V series, this fleet of new mobile devices was launched recently with the unveiling of the LG V10. And the company boasts there are many more “firsts” coming with this newest phone. Perhaps most noteworthy is LG’s claim that the V10 represents the “first” smartphone with “multimedia capabilities never seen in a mobile device.

More 4G for India and Africa? Here’s How Your Business Benefits

Emerging markets such as India and Africa are focused on the potential of high-speed mobile connectivity to boost their economies like never before. As a result, faster 4G connections are rapidly gaining momentum in these markets. For small businesses — including those in the U.S. — this could open a window of exciting opportunities too.

Samsung Will Actually Pay You to Buy This Device

Samsung is literally paying for customers to buy its smartphones. The company is lagging behind Apple in smartphone sales lately and hopes paying the first three months of a new customer’s phone installment payment will sway some people to try one of its devices. The company’s offer lasts until Oct. 16.

Chromebooks are designed to work out of the box without adding anything else. This has proven to be a very successful delivery model in different segments, but especially in education, where it has seen the highest adoption rates. As a company that makes one of the better Chromebooks, Toshiba has launched the second iteration of its Chromebook 2.

Among the many announcements made at Google’s Nexus event on Tuesday, including two new Nexus phones, the company revealed their all in-house 10.2 inch tablet, the Pixel C. You may recognize the Pixel name. Google released the original Chromebook Pixel several years ago, the newest version having come out earlier this year.