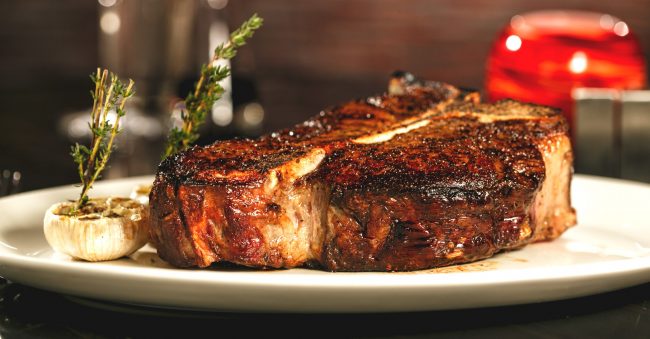 America is in the midst of an increasingly intense love affair with Japanese beef. Witness Don Wagyu, the new shop in downtown New York devoted exclusively to Japanese beef sandwiches that start at $28. The counter sells around 150 a day, including an average of eight $180 Ozaki “sandos.”

But while Japanese diners have enthusiastically embraced Shake Shack, which has grown to nine locations since the first opened in 2015, American steakhouses have been slower to establish themselves. Chains such as Ruth Chris have been in Japan for over a decade; but the New York-style experience, with pricier cuts of meat and a buzzy, familiar environment, have been slower to establish themselves. Wolfgang’s arrived in 2014, and Benjamin Steakhouse and Empire Steak House just last year.

The reasons are myriad, ranging from restrictions on US beef imports, which didn’t ease until 2013, to Japan’s economic recovery, as well as anticipation of the 2020 Olympics. The Japanese have also developed a big taste for dry-aged beef, a major change from the fatty, soft beef they’re accustomed to. Imports of American beef rose 26.6 percent in 2017 through November, according to Bloomberg.

In July, the legendary, Brooklyn-based Peter Luger Steak House announced it would open in Tokyo by 2020. It’s only the third location of the frenetic hall, which opened in Brooklyn in 1887 and has a Long Island outpost that dates back to 1960.

“The Olympics doesn’t hurt,” says Luger co-owner Daniel Turtel. “It will be good for our international expansion, however long that takes, maybe another 60 years.” Turtel and co-owner David Berson teamed up with WonderTable, Ltd., the Tokyo-based restaurant operators who have helped bring such flagship properties as Union Square Tokyo. “WonderTable helps bring our brand to a Japanese clientele who has been coming to Luger consistently for last couple years,” says Turtel.

Berson promises that Luger will “schlep their prime meat from here to Japan.” It’s building an aging room in the restaurant, which will echo the heavy wood interiors of the Brooklyn spot. But any Tokyo building that is capable of housing a Peter Luger Steak House, with room for 160 guests, will have to be new. Berson is targeting the neighbourhood of Minato-ku, which encompasses business areas like Shiba and Shimbashi.

Berson anticipates that prices at Peter Luger in Tokyo will be higher than in New York, where steak for two costs around $104, and steak for three about $156. “It’s an expensive product, and there’s already a 38 percent tariff from U.S. beef going to Japan,” he says.

Meanwhile, New York steakhouse Benjamin sees potential outside Tokyo. It will expanding from its Roppongi location, which opened in 2017, to another spot in Kyoto by the end of 2018, with yet another Tokyo location by 2020.

“We knew from our customers in New York that there was a big craving for American beef in Japan,” says co-owner Benjamin Prelvukaj. (His Midtown Manhattan customers include Japan’s prime minister, Shinzo Abe, along with Bill and Hillary Clinton and Kim Kardashian.) Prelvukaj sees Japan as an emerging market for his company, although it’s as costly to open a restaurant in Tokyo as in New York: from $3 to $5 million. The menu in Japan is the same as in the U.S., as is the best seller: porterhouse. One difference, though, is his customer base. While he sees a similar mix of tourists and business people, “we’ve also seen a large number of local Japanese women; the leaner cuts of American steak appeal to them more than fatty Japanese beef.”

Benjamin’s Japanese partner is Oizumi Foods. Yuu Murakami of the Tokyo-based PR company K2M Inc. credits companies like it and WonderTable with helping promote the New York steakhouse trend. They “have enough capital strength to invest in new projects, and bring overseas brands to Japan,” she says.

But by all accounts, the biggest challenge to opening an American steakhouse in Tokyo isn’t just finding a well-funded Japanese business partner; it’s locating the space.

“Most steakhouses need big spaces, including lots of seating room, to age the beef. And big spaces are hard to come by in Tokyo; you’re not going to easily find a 5,000- or 7,000-square-foot space, unless it’s a new space,” says Steven Hall, founder of Hall PR, who represents Japanese brands such as Ikinari, the standing steakhouse chain that expanded to New York in 2016 and now has nine locations.

Hall predicts that Japan will see a sharp increase in New York steakhouses leading up to 2020. “The city is building more hotels and properties that will house restaurants, timed to the Olympics. They can, and will, customize spaces to accommodate those kind of steak houses.” He anticipates the majority will be in areas that are convenient to a business audience, such as Tokyo Midtown.

Berson says the upcoming Luger might serve local specialties. “We won’t duplicate the porterhouse experience with wagyu for four. But If there are certain appetizers that fit with our menu, we might try them. I don’t think you’ll see sushi on the menu.” Then Berson adds: “I did try sushi with filet mignon recently, and it was pretty great. Maybe that will be an off-the-menu item.”