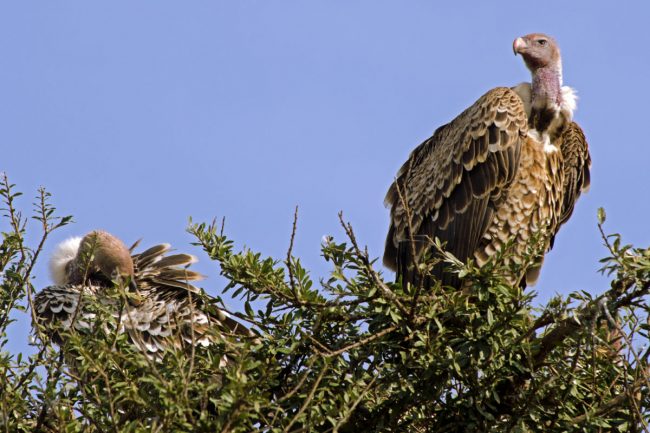 Kenyan conservationists are challenging plans to host a music festival at Hell’s Gate National Park, 100 km outside the capital, Nairobi, on Feb. 14. They say it will negatively impact wildlife in the park, including endangered vulture species.

Organizers expect the festival will attract an estimated 20,000 people. The Kenya Wildlife Service (KWS), the government agency charged with conservation and management of wildlife, also plans to host the East African leg of the World Rally Championship in Hell’s Gate in July.

Conservation organization Wildlife Direct has applied for a court injunction against KWS and the festival organizers, arguing that no proper assessment of the environmental impact of the music festival has been done. The organization wants the festival moved elsewhere, and disturbance of wildlife in the park to be minimised, allowing already-declining raptor breeding colonies in the park’s cliff habitat to recover.

“This decision to go to court over Koroga Festival was a last resort,” said WildlifeDirect CEO Paula Kahumbu in a statement, “after efforts to persuade the private and state partners to move the festival, a 2-day music concert to an audience of 15,000 or more customers. The Hell’s Gate is the only protected colony of breeding Rüppell’s vultures, which is critically endangered.”

The NGO also launched an online campaign calling for the relocation of the festival to a site elsewhere, attracting support from the Conservation Alliance of Kenya, local and international NGOs and the tourism Industry.

This is the first time the Koroga Festival, an annual event celebrating African music, food, and fashion organized by Nairobi-based media company Capital FM, is taking place outside of Nairobi. Besides performances by popular musicians on a main stage, the festival will also include activities such as a cycling race, a clean-up effort at nearby Lake Naivasha, and a hike on Mount Longonot, an adjacent protected area.

According to a project summary produced by Nakuru County’s ministry responsible for trade, tourism and cooperatives, the site of the festival will be in front of the Main Wall, some 7 kilometers from the Rüppell’s vulture (Gyps rueppelli) nesting site. The summary says disturbance will be minimised by a temporary fence around the festival site and KWS patrols; speakers set up to face the park’s admin buildings rather than into the park; and restricting vehicle access to emergency services only.

KWS did not respond to Mongabay’s request for an interview before publication, but the service released a statement defending the event, describing Hell’s Gate as an “activity based conservation and recreation facility”. The park has hosted similar events in the past, including a jazz festival in 2018, and an annual wheelbarrow race to raise funds. KWS also argues that some of the revenue raised by events like this is used for conservation and community development. A Jan. 16 letter from KWS to the festival organizers sets out total fees of 700,000 Ksh (7,000 dollars) to cover security and conservation fees for this event.

“But these are not the primary purposes of a national park,” Kahumbu told Mongabay in an interview, “they are supposed to be used for conservation of wildlife. We understand that the government has to generate revenue but we are not convinced because such activities degrade the environment.”

One of Kenya’s smallest protected areas, Hell’s Gate National Park features the Main Wall, one of the highest cliff faces in Kenya’s Rift Valley. The cliffs provide breeding habitat for raptors such as eagles, falcons, and vultures, one of the factors prompting the gazetting of the park as a refuge in 1984.

Its spectacular cliffs and canyons as well as geysers and hot springs have long been a popular destination for hikers and climbers – by some accounts, climbers on the Main Wall have frequently disturbed nesting sites there.

The park’s ecology has also been impacted by the development of geothermal power in this area. A draft report by a task force investigating the impacts of state-owned KenGen’s power stations says the likely reason for a sharp decline in numbers of breeding pairs of Rüppell’s vulture and the complete disappearance of breeding bearded vultures (Gypaetus barbatus) and Egyptian vultures (Neophron percnopterus) is noise and other disturbance linked to power generation.

The report further states that an agreement detailing ways to mitigate the impacts of geothermal stations on the park had been neglected by both KenGen and KWS.

Biologist Munir Virani, executive vice president of the Peregrine Fund, says that vultures are critical to the integrity of ecosystems. By rapidly eating carcasses, they help limit the transmission of disease amongst other scavenging carnivores like jackals and hyenas.

An investigation led by the Peregrine Fund’s Darcy Ogada into the effects of declining numbers of vultures on ecosystems in Kenya found that in the absence of the winged scavengers, it took nearly three times as long for a carcass to decompose, with three times as many scavenging mammals spending far longer at carcasses, creating conditions for the spread of diseases such as rabies.

Across Africa, vulture populations have fallen by an average of 62 percent over the last three decades — with seven species crashing by 80 percent — due primarily to accidental poisoning aimed at livestock predators.

Virani told Mongabay that the East Africa region has lost 70 percent of its vultures in just the last decade. “It is high time that governments and other conservation actors realise that if we do not act now to restore the vultures, we are sitting on a time bomb,” he said.

For Kahumbu, this underscores the importance of protecting vultures and other animals within national parks. The biggest challenge, she says, is a breakdown of effective regulation, permitting damaging events to take place without meaningful oversight by the responsible bodies.

“We have gone to court hoping that they will stop the event so that we can go back to the drawing board and talk to each other on the need to conserve the park,” said Kahumbu. “We filed an application in court for an injunction as well as a petition against the KWS and Naivasha Love Festival over the Koroga Festival which is planned on 14/15th February at Hell’s Gate National Park. We need to rehabilitate the park to restore the ecosystem and the birds will be back. We have done a lot of harm to this park, we need to save it now.”