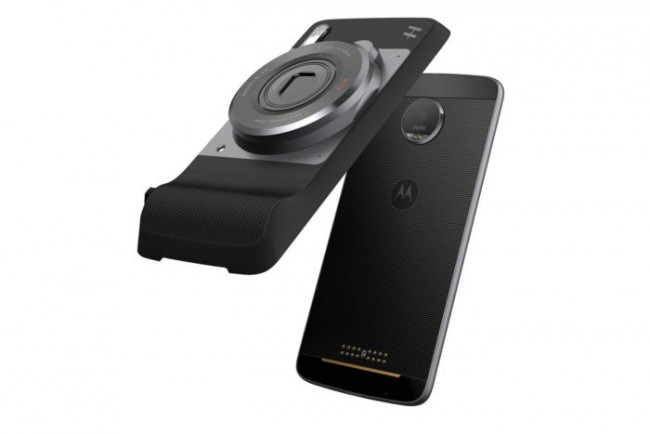 You know about Moto Mods, right?

Of course you do — they are the phone attachments that transform your Moto phone into a camera, a projector or speaker. Well, Moto may be out of ideas, because the company now wants everyone to come up with their own Moto Mods and share them through a crowdfunding campaign or at a hackathon. But how will this all work?

In IT Blogwatch, we use our phones as, well, phones.

Just some background — what exactly are Moto Mods and what is the story here? Carl Velasco fills us in:

Motorola’s own version of the modular smartphone…is made possible by the Moto Mods, a series of accessories that can latch onto the back of compatible Motorola smartphones that add extra functionality.
…
These devices have…been…struggling to bleed beyond being a “concept” accessory instead of a legitimate, mainstream innovation for smartphones…But with the help of a new developer competition…coupled with Motorola’s Moto Mods Development Kit, or MDK, all bets are now off in terms of what’s possible, now that everyone’s ideas are involved.

But how are “everyone’s ideas” involved? JC Torres explains it to us:

To…help…mod dreams come true, Motorola is partnering with crowdfunding platform Indiegogo to help…dreamers find funding for their…ideas…The “Transform the Smartphone Campaign”…is like a cross between your usual crowdfunding pitch and a sponsored project. Interested mod developers will first have to submit their ideas to Indiegogo. Winning pitches are awarded with a Moto Mod Dev Kit…as well as a Moto Z smartphone to get the ball rolling.
…
Of course it doesn’t end there. They…have to create prototypes and…submit those to the wisdom of the crowds…this part is like a normal Indiegogo run. Except that Moto and Verizon will help advertise those projects. Ten finalists…will have a chance to be funded and have distributions arrangements with Lenovo and Verizon.

What about timeline? When is all this happening? Alex Wagner is in the know:

During the [Transform the Smartphone Challenge], you can share your ideas for a new Moto Mod to apply for a Moto Mods Development Kit and a Moto Z phone until January 31…Once you’ve got your prototype, you’ll launch a campaign for it on Indiegogo between January 3 and March 6, 2017.

In addition to advertising, Motorola helps people set up these Ingiegogo campaigns once they have ideas? According the the campaign FAQ, not so much:

In order to be eligible for the Transform the Smartphone Challenge and receive a trip to pitch and learn at Moto’s HQ in Chicago and for the chance to receive distribution through Verizon and other benefits, you must launch an Indiegogo campaign…It is the sole responsibility of the campaign owner to fulfill the perks associated with his or her campaign. Make sure you plan accordingly!…Feel free to submit as many ideas as you’d like!

Ok, so there’s that. What about these hackathons? How will they work? Kellex has the details:

As for those hackathons, Motorola…plans to host a couple in New York and San Francisco over the coming months…If your ideas at the hackathons are a success and you win, you could find yourself with a paid trip to Chicago to discuss ways of bringing it to market.

So why is Motorola doing this? And what will ultimately happen if, after your Indiegogo campaign or a successful hackathon, Motorola likes your idea? We let the company tell us:

We know we can’t come up with every Moto Mods idea…real innovation doesn’t just happen behind closed doors. That’s why we shared the Moto Mods Development Kit (MDK) with the world, allowing people…to contribute to the ecosystem by bringing their own Moto Mods to life.
…
If your idea really impresses us, it…might land you an investment from Lenovo Capital, who has set aside up to $1 million to help bring the best Moto Mods ideas to market. Our…executive development team will be on the lookout for the best working prototypes. If it finds something truly outstanding, the responsible development teams will be invited to pitch for investment funding from Lenovo Capital…It’s really that easy. All you need is an idea, the passion to bring it to life and the financial support to drive a new era of mobile technology forward.