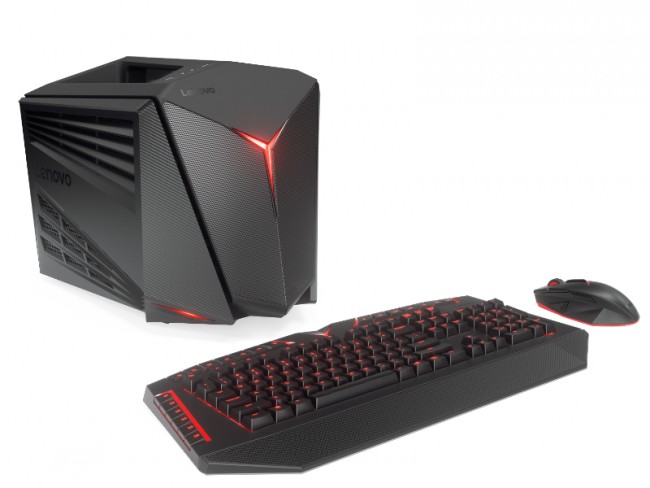 Both the desktops sport a red and black design synonymous, and Lenovo claims that the devices are ‘VR ready’. Beginning with IdeaCentre Y710 Cube, the cabinet comes with a built-in handle, and is bundled with an Xbox One wireless controller. It is powered by a sixth-generation Intel Core i7 processor, houses Nvidia’s GeForce GTX 1080 paired with 32GB of DDR4 RAM. It offers a hybrid storage system of a 2TB HDD and a 256GB SSD. It supports 4K gaming, and high-quality streaming as well. With respect to connectivity, the Y710 sports one HDMI and VGA port, three USB 3.0 ports, and one USB 2.0 port.

The Lenovo IdeaCentre AIO Y910 all-in-one PC is bit a more expensive price point than its companion, and that’s because of the 27-inch Quad-HD (2560×1440 pixels) display packed alongside. All the other specifications of the Y910 remain the same as the Y710. It is important to note that the prices mentioned above are of the variants sporting the GeForce GTX 1070 GPU, and the cost of the devices with the highest specs is unknown. lenovo_ideatek_y910.jpg There is no word on when Lenovo plans to launch the devices in India. Lenovo recently launched the Yoga 710 convertible laptop in India for Rs. 85,490. It features a 14-inch full-HD display that can be swiveled 180-degrees to transform into a tablet. It is powered by sixth-generation Intel Core i7-6500U processor, 8GB of 2133MHz DDR4 RAM and a discrete Nvidia GeForce 940M GPU with 2GB of DDR3 video memory. It weighs 1.55kg, and comes with a 256GB SSD. The company is touting a battery life of up to 8 hours with the 4-cell 53WHr battery on board.
Share a screenshot and win Samsung smartphones worth Rs. 90,000 by participating in the #BrowseFaster contest.