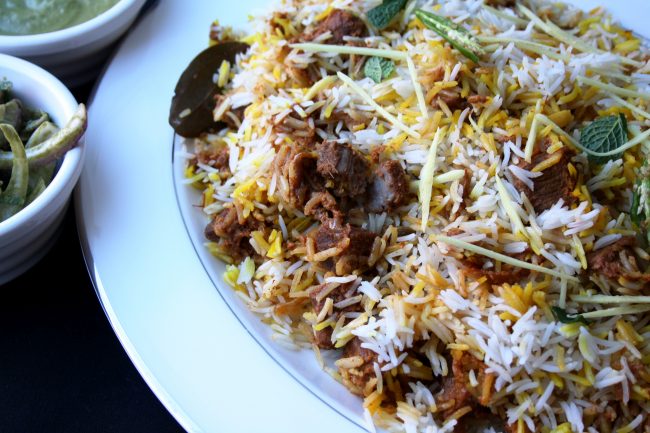 Biryani is one of the most loved delicacies not just in India but across the globe. It is said that, biryani was first brought by Mughals in north India, whereas in south India it was introduced by the Arabs. Thereafter, India witnessed many different versions of biryani – including Hyderabadi biryani, Keema biryani, Awadhi mutton biryani, Lucknowi biryani, Chicken biryani, Fish biryani – all with their own unique taste and flavour.

Biryani is a complete meal in itself, apt to suit all occasions, whether you are looking for a lazy Sunday afternoon or grand indulgence at the dinner table. For making a perfect, lip-smacking biryani, you need to follow a few steps as making biryani is not less than an art.

The Taj Mahal Hotel, New Delhi has organised a special master class on biryani making with Chef Rajesh Singh at Varq. The master class presented an opportunity to work with, and learn from, the experts about the different techniques to cook brilliant biryaniat home.

During the workshop, Chef Rajesh Singh shared some of his biryani recipes, and spoke eloquently about eating a diverse range of biryanis in his hometown. Explaining the idea behind the entire he said, “It is to tell people how this variant of biryani is cooked under pressure (also known as dum-pukht), which is a slower method of cooking.”

Points that are to be kept in mind while making biryani at home, as guided by the Chef:

3. While making Kachche Gosht ki Biryani, the first stage entails marinating the lamb with a dry rub of chilli, garlic, salt and then refrigerating the meat for a day. Whereas during the second marinade, coat the lamb with a paste of mint and pineapple juice and leave it for an hour.

4. For the ones who are allergic to pineapple, may substitute pineapple juice with skin of raw papaya.

So, now you have the secret recipe of this delightful delicacy that will help you to make delicious and amazing biryani the next time you are in a mood to cook it by yourself at your home. Bon appetit!