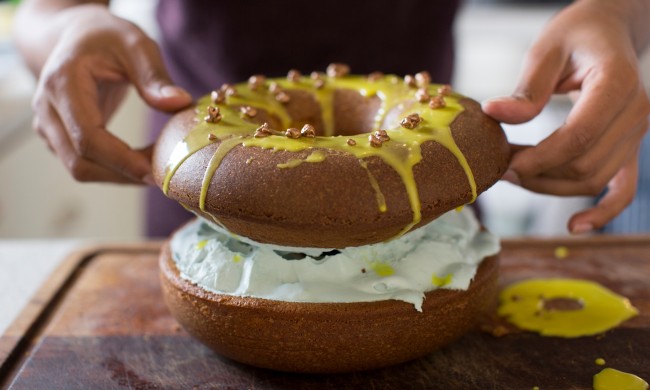 The Large Doughnut Cake Mould (£9.99, Lakeland) is a bisected, toroidal baking mould. Individual batter hemispheres can be integrated into a ring-shaped dessert.

Doughnuts have a hole in – which equals less doughnut – which is healthier – which means it’s fine to eat one the size of a rugby ball. Let’s move on.

We’re very into sharing now, aren’t we? On social media, value is determined by how many “shares” you can get. “Sharing is caring”, advertising constantly tells us. “Sharing is halving”, is the way I see it, particularly when it comes to food. I’m at my most wretchedly happy eating tapas solo, or working my way through one of those bags of Doritos you’re meant to take to a party. This week’s item is “the big sharing doughnut!” These people don’t know how I live.

They also don’t know what a doughnut is: the twin moulds actually allow you to create an oversized, un-fryable, doughnut-suggestive circle, admittedly a less snappy slogan. For my money, a real doughnut has to be introduced to boiling oil, like a Frenchman besieging a medieval castle. This baking talk has me bamboozled. There is no recipe included, only the stipulation to use five eggs and figure it out. They may as well have painted a middle finger on the box. The photo suggests I’m aiming for a UFO-shaped cake, so I make up a mixture with creamed butter, milk and flour and pour it in.

After baking, I consult my, er, batter halves; the browned hoops resemble a massive bagel. The final result, though – iced and filled with rose cream – is visually striking, and scrumptious. I like its fantasy proportions, a bit Gulliver, a bit Alice in Wonderland, as if it should have an “Eat Me” tag attached. (I always thought those superfluous: if I fall in a hole and encounter a magical bun, it will be in my mouth within four seconds, regardless.)

My friend Kate took one look and smirked: “‘That’s not a doughnut, that’s a bundt cake.” (She’s like Crocodile Dundee for puddings.) I agree: this unidentified frying object may be delicious, but doughnut be fooled – it lacks the ring of truth.