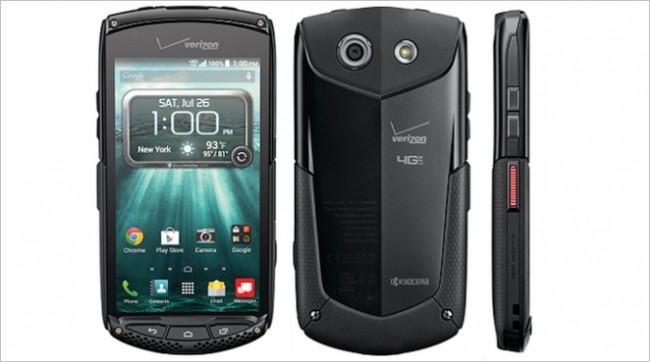 This is an Android phone with a compact 4.5 inch, 720p HD screen made with sapphire, which is the mineral second only to diamonds on the Mohs hardness scale.

It has a Qualcomm Snapdragon 400 processor with a 1.4GHz quad-core CPU and 2GB RAM. The battery is 3100mAh, Lithium ion and non-removable.

This phone has a dustproof and waterproof Ingress Protection rating of IP68. When it gets dusty on the outside, you can rinse the entire phone under running water without worry.

Because of this waterproof aspect, it looks new, even after 14 months of use. And according to Kyocera, the Kyocera Brigadier E6782 can be submerged for up to 30 minutes as long as it’s dried afterward. But the company also says you shouldn’t plan on actually operating it while it’s underwater, or plan to go deeper than six feet.

The bright flashlight built into the left side of the phone works with a large red physical button. No special method is needed to work it. All you do is press it on and off.

Most people will find this model can be operated with one hand because of its compact size at 5.37 inches x 2.69 inches. And the settings interfaces are easy on the eyes, with a larger than usual bolded font size.

The WiFi is very reliable and was the most-used method of Internet connectivity during testing.

The Brigadier has a compass that’s large and rather sophisticated in appearance named the Dura Compass. Ideally, it would be available as soon as you power on, but it must be added via the add widget command. It’s a good compass once you get it set up. Before using it, you’ve got to find it, add it, and then initialize it by motioning the phone in a swooping figure 8 pattern in the air until it reads. This is what Kyocera calls calibration. It took more than four attempts in testing, but it finally worked.

Another con is that the micro SD memory card slot will expand its file storage capacity to only 32GB (16GB + 16GB).

Who Kyocera Brigadier E6782 Is Best For

Businesses where workers are regularly near dusty or sandy environments, or near water can benefit from this model. The review unit was never dropped in 14 months. But if you tend to drop your phone more than you care to admit, the sapphire screen of the Kyocera Brigadier E6782 might be what you need.

At a cost of $460 retail, you’re getting a rugged phone that arguably won’t need to be replaced for awhile. It works seamlessly with the Google ecosystem, as expected.

Disclosure: Complimentary Brigadier received in 2014. All opinions belong to the writer of this review.