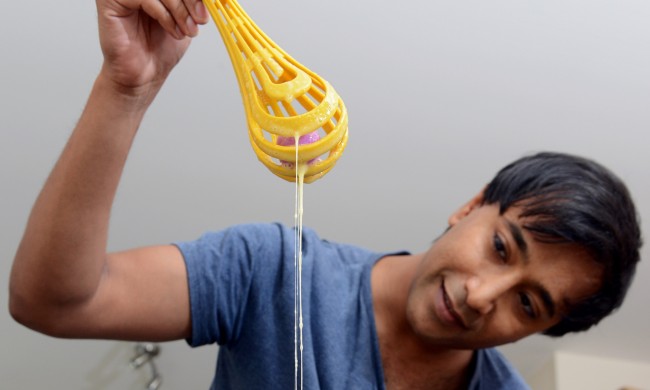 So you can dish out one hell of a beating.

Perhaps due to some repressed trauma, I’m a big fan of simple, repetitive motions. Shining shoes, sharpening pencils, fiddling a tax return – any activity that bypasses the brain, soothes the savage breast. It’s why I like cooking, which offers many opportunities – peeling, shelling, kneading (AKA the bits other people hate).

But the best is whisking. I love the vigour of it; transforming densities, the race against lactic acid creeping up the arm. I wanted to call this column Whisk Analyst, but it was felt that a weekly review of whisks was “too niche”. So, I understand not everyone shares my passion. And if everyone did, maybe I wouldn’t? Mmm. Deep.

Which brings me to Kogel Mogel, a strange name for a whisk. Sounds like it might have something to do with kegels; but if you use this thing to strengthen your pelvic floor, I have nothing but admiration and disgust for you. It’s actually named after a Yiddish folk dessert, popular during communism, so chuck that on the pile of reasons I love it. It’s big. At first glance, it looks like a box of circus equipment; closer, a circuit of screwball scramble. Where is that purple ball from? Has it been prised out of a dishwasher tablet? Maybe it’s the mythical national lottery Thunderball – I never clearly understood what that was. The mixing basin rests on a rubber ring and can be angled any way. It’s stable enough to whisk one-handed, freeing your other hand to update social media, or whatever hands are for now. Thicker batters did get clogged in the architecture, but no whisk is a one-size-fits-all. The brushed steel bowl is usefully large and the reverberating ball adds satisfying oomph in the stroke. It claims to speed whisking by 30%, a conveniently round number. Anyone can just throw out figures. For instance, I’m 41.9% happier with Kogel in my life. It’s quality whisk-y, neat.