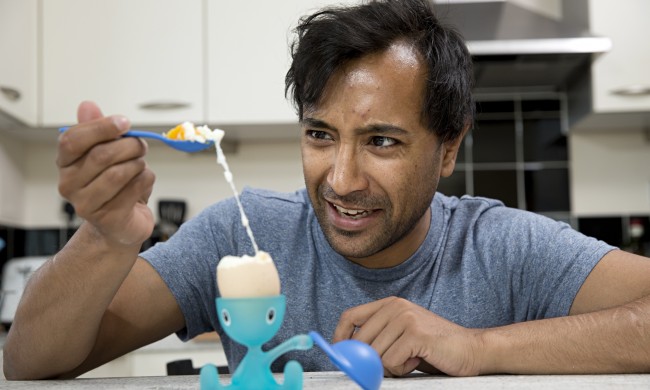 Egg-Per’fect (£6.49, Lakeland). An immersible sensor that heats up alongside your eggs, changing colour on a graduated scale to indicate how cooked they are.

Sure, eggs is eggs, but they is also tricky buggers. This pretender takes guesswork and old wives’ tales out of the egg-quation.

Boiling an egg is arguably the most fundamental unit of cooking, like pence to the pound. But, while it’s the first lesson we’re taught, it’s not the easiest to learn. I routinely undercook soft-boiled eggs, sending my soldiers in to fields of gooey, ectoplasmic horror. I get bored hard-boiling, time it wrong and am rewarded with grey egg flesh. I need saving from myself, and this is where the Egg-Per’fect rolls in. Weirdly, the packaging calls it Egg-Per’fect, with hyphen and apostrophe, to make absolutely certain we’re using the verb form, ie, not PER-fect, but per-FECT. Rococo punctuation and grammatical fixation in a pretend egg? Now I’m paying attention! I pop it in the pan with the other oeufs, and bring the water to boil. It nestles with them, out of place yet comfortable as a cuckoo’s. Unlike egg timers, Egg-Per’fect claims to account for the number and size of your eggs, the amount of water, and altitude you’re cooking at. It doesn’t really, though, does it? It’s just measuring its own temperature (it has the same thermal conductance as an egg), which is affected by those things. It’s not like the car from Knight Rider. Anyway, as it heats up, the central disc darkens, the red portion shrinking along a scale of egg-readiness. You can hoik your eggs out at degrees of soft, medium and hard boiled, and leave the Egg-Per’fect to cool on the counter. There’s no washing, no parts, no preparation. It works! My soft-boiled eggs are yolk-bursters, hard-boiled efforts are creamy and perfectly set. I couldn’t be more pleased with this chunky hero! I’ve taken to referring to it as my love egg, despite being informed this is a bad idea. I was always a slow learner.