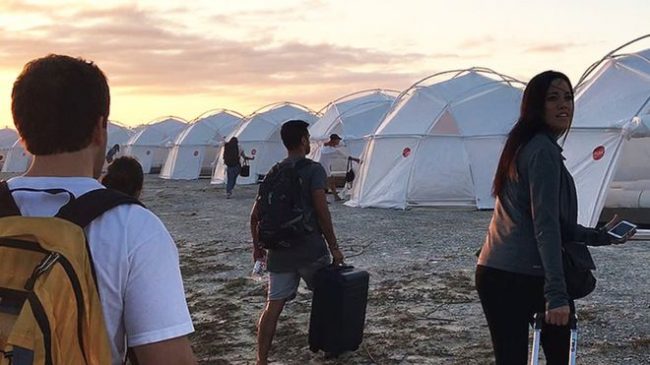 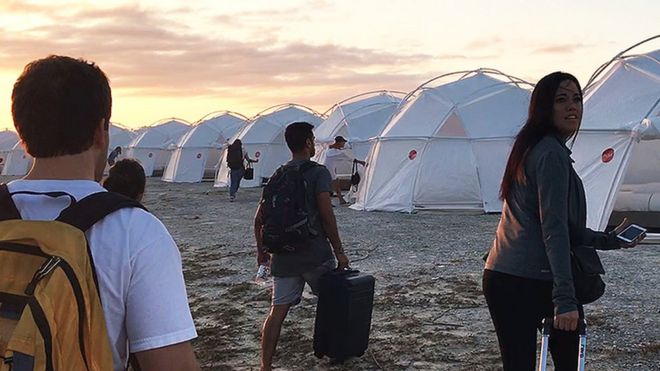 Fyre Festival was the most talked about festival experience of 2017, but not because anyone had any fun there.

Advertised by famous faces including Kendall Jenner, Bella Hadid and Hailey Baldwin, it was billed as a glamorous party on a deserted island.

Tickets cost up to $100,000 (£75,000) and guests who booked were promised luxury accommodation and “the best in food, art, music and adventure” in the Bahamas.

Instead they turned up to mattresses on rain-soaked floors, meals of cheese slices on bread and their luggage thrown into a unlit car park. 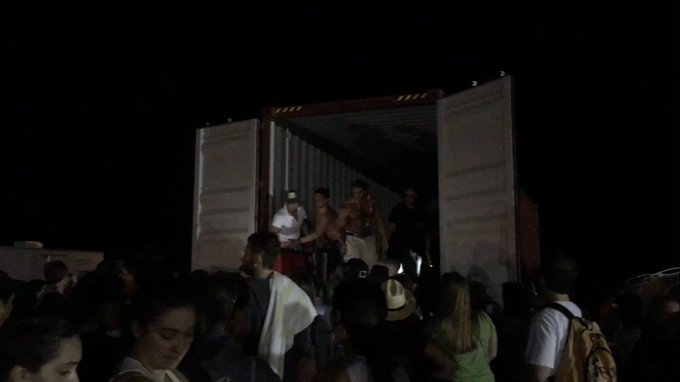 This is how Fyre Fest handles luggage. Just drop it out of a shipping container. At night. With no lights. #fyrefestival

Fyre Festival is now the subject of two new documentaries, one of which premieres on Netflix on Friday.

Seth Crossno, a blogger and podcaster, and his three friends spent $45,000 (£34,785) on tickets, travel and luxury accommodation.

But when they turned up they found it was still practically a building site.

“There were still workers, pick-up trucks and 18-wheelers everywhere,” he tells Radio 1 Newsbeat.

“I tweeted out a picture of a planning notebook we found on the ground and it’s hysterical.

“There’s a list of things the organisers wanted to order and it’s things like 6,000 Skittles sweets and 9,000 glow-lollipops. Did anyone think about planning the actual festival?”

Seth, who blogs under the name William Needham Finley IV, live-tweeted his experience and his videos have now had millions of views.

The Netflix documentary, Fyre: The Greatest Party That Never Happened, focuses on the disastrous build-up to the event – which was organised by businessman Billy McFarland.

A rival doc was released earlier this week on US streaming service Hulu.

While Fyre was promoted as an exclusive party for wealthy Instagram influencers, Seth says there were more ordinary people at the event than Insta-famous models.

“Everyone watching assumed everyone there was an influencer who was wealthy, who had been flown down and was expecting this life of luxury but was being slapped in the face with reality,” says Seth.

“Some people I talked to had spent $500 (£386) on their tickets and it was their spring break from college. They thought it just looked like a cool trip.

“Watching on Twitter you think all of these influencers are getting a taste of the real world here.

“I think it’s just human nature to see people who are in that situation and laugh or get some sort of pleasure from seeing somebody taken down a notch.

“But there’s so much more to the story than rich kids of Instagram meets Lord of the Flies.”

While the chaos of the festival was mostly told on Twitter, the Netflix documentary focuses on what went on behind the scenes on the island of Great Exuma in the Bahamas.

“The organisers had six to eight weeks to pull off something that should have taken close to a year,” says Chris Smith, who directed the documentary.

“But what was most surprising to me was going to the Bahamas and seeing the aftermath of what was left behind and the effect on the people there.”

Fyre Festival wasn’t just a miserable experience for the people who paid to party, it also had a major impact on the local people of the island who helped organisers build the festival.

“They had engaged with so much of the local community to try and pull this off. There were hundreds of day labourers working,” says Chris.

“Fyre had such a high profile that I don’t think anyone could have assumed that it wouldn’t work out.”

One restaurant owner in the documentary admits she stumped up $50,000 (£38,500) of her life-savings catering for Fyre Festival in the build up to the event.

“She put in a huge part of her savings to try and live up to the obligations she had made to them,” says Chris.

“In the end, when things fell apart everyone just left. She was left having to deal with this.

“Nobody went back to deal with that and that people moved on and came back to living their lives in New York and didn’t own up to the responsibility of their actions.”

Organiser Billy McFarland failed to pay workers on the island for their time or resources.

He’s the one man missing from the documentary – Chris says he refused to be interviewed unless he was paid for his time.

“We just didn’t feel comfortable with him benefitting after so many people had been hurt based on what he had done,” he adds.

Rapper Ja Rule was originally described as a co-organiser of the event – but was not arrested or charged in connection with the fraud. His lawyers have argued that McFarland used his name and connections to promote the event.

“Six years doesn’t seem to fit with what he did and the impact he had on everyone else,” says Seth.

He successfully sued Billy for $2.5m (£1.9m) – but expects to wait up to 20 years to get his money back as the fraudster must pay back $27m (£20m) to investors before settling other debts.

“I’m not in a position to say he should spend 20 years in prison but six years doesn’t seem like a lot.

Seth hopes money gets to the people on Great Exuma first, and believes attention from the new documentaries could be what helps get them repaid.

“Hopefully we can work on getting the people in the Bahamas paid back too,” he adds.

“With people like Netflix involved and these influencers, there’s no reason why some money can’t be raised to make it right for those people.”